You are here: HomenextPeoplenextObituariesnextSandra Searles 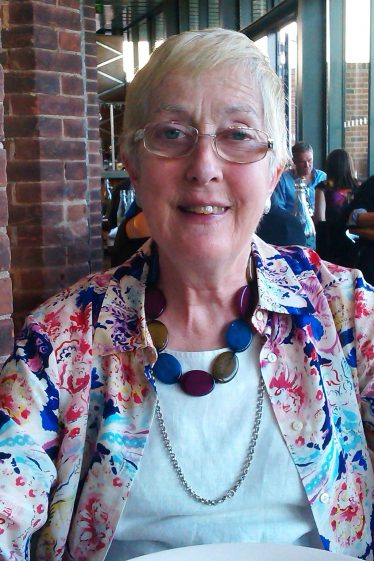 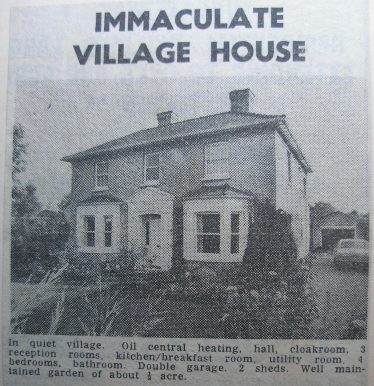 Sandra was born in Glasgow in 1943. After her brothers Norman and Richard arrived, her father secured a role as a partner in firm of solicitors in Anstruther, a fishing village in Fife. The family moved across and that is where Sandra and her brothers spent their childhood.

This part of the Scottish coastline is filled with picturesque fishing villages and this gave Sandra a strong connection to the beauty of the coast and sea views that continued throughout her life. It was clearly a lovely rural upbringing which saw Sandra cultivating a vegetable patch at the family home from an early age – a passion which she retained throughout her life.

Four years of boarding school in St Andrews followed which she remembered fondly. She clearly did well at school and was lined up to stay on for a seventh term to apply to Oxford. However, when her father was taken ill in her last year at school she decided to stay closer to home and study for her Chemistry degree at Edinburgh where she was the only woman in her year to graduate with first class honours.

While a student she had various interesting summer jobs including working in a psychiatric hospital, delivering the Christmas post and working as a chamber maid. These jobs were interspersed with plenty of travel. A very memorable trip was her three week visit in the mid 60s to Poland where Sandra and her great friend Zosia, travelled independently around Poland at the height of the Cold War to visit a number of Zosia’s relatives. It sounds like it was quite a trip!

After Edinburgh, Sandra got a job down south in Dagenham with the pharmaceutical company May & Baker, working as a Chemist in their research department. This would have been quite a change from rural Fife, but she enjoyed a very sociable work environment to welcome her to life South of the Border. The May & Baker rugby team was a particularly sociable crowd and so an invitation from a young Rob Searles to the May & Baker rugby club ‘Dinner and Dance’ turned out to be our parents’ first date and the start of over fifty happy years together.

Sandra and Rob were married on a glorious day in August 1968 back in Anstruther in Sandra’s old church with a wedding breakfast in the Craw’s Nest Hotel. On their honeymoon they drove around the North of Scotland in glorious weather, steps the family have retraced in subsequent holidays.

Early married life saw Sandra join Unilever and work on research into how to make chilled desserts which importantly didn’t collapse. This was clearly also a really sociable work environment where she made a number of great friends. Rob joined Johnson Matthey and they moved to their first house together in Bengeo, Hertford.

They had some wonderful times together before children arrived, including two years owning a 16ft two-berth boat which was moored on the canals in Braunston, Northamptonshire and on which they spent memorable holidays. In 1969 they drove all the way to Greece in their Morris 1300 with a small tent which was quite an adventure.

The 1970s were a time of great change as they moved to a larger house in Hertford and in 1972 Kirsty was born. Heather came along after eighteen months and Lucy was born two and a half years later. Rob was keen to utilise his ever-increasing DIY skills and started a pattern that continued throughout their lives, doing a lot of work on the house, including building a small extension and a garage. They made many lifelong friends in Hertford and enjoyed their garden with beautiful views over the Lea Valley with great soil in which Sandra grew lots of vegetables.

They bought a frame tent, replaced a few years later by a trailer tent. The family spent many happy holidays camping throughout the UK and Europe, including one three-week holiday in which they managed to visit no fewer than seven countries.

In 1978, the family moved to Orchard Dene in Meldreth, starting a new phase in the life of the Searles family. We have many happy memories of nearly 30 years living in Orchard Dene.

Over the years, Sandra and Rob spent a great deal of time renovating and extending Orchard Dene. The garden was Sandra’s domain and she created a beautiful open garden for the children to grow up in. The top part of the garden at Orchard Dene was converted in later years to a paddock for a pony and then a horse.

During this time, Rob was very busy with his worldwide travels for Johnson Matthey and Sandra started her 20-year role as a molecular biologist at the MRC Laboratory of Molecular Biology in Cambridge, the home of a large number of Nobel Laureates. Sandra said that she always regarded it as a privilege to watch exciting science at such close hand.

Sandra and Rob bought a cottage in the Scottish Borders in 1993 which they renovated and used as a base in Scotland which enabled her to keep in touch with her family. The cottage was a link to her heritage in a beautiful part of the world. We all made regular visits there and have memories of lots of happy holidays.

With the girls away at University or in jobs, Rob changed jobs and weekly commuted to Brussels for six years whilst Sandra continued to work at the LMB and looked after the house and garden.

In late 2001 Sandra was diagnosed with breast cancer which was treated but was to come back after fifteen years.

Three weddings followed in the early and mid-noughties with lovely memories of these occasions. Sandra found lots to keep herself busy after the girls had all flown the nest.

Both Sandra and Rob had a love for travel in their retirement. They bought a share in a canal boat on which they enjoyed many holidays along various canals with family and friends. Their travels were not limited to the UK however. In fact, they travelled to every continent (except Antarctica!) during this time. They really enjoyed these trips and were always up for sightseeing and learning about other cultures.

Sandra looked for opportunities to get the family together for holidays and they were lucky to have many lovely trips together with the increasing number of grandchildren.

After she retired from the LMB, Sandra trained as a volunteer for the Citizens Advice Bureau. She dealt with a lot of colourful characters with patience and humour, giving her time readily.

Not wanting a quiet life in retirement, twelve years ago Sandra and Rob bought a dilapidated cottage on a plot of overgrown woodland in Stone Lane. Some thought they were a bit mad at the time but together over several years they have lovingly created a beautiful home, garden and wood. Sandra had a clear vision for the plot and the result was a garden that is stunning throughout the year, particularly in winter when vast beds of snowdrops appear in the wood which Sandra loved.

Sandra had a very active role in the local community. She was a member of the Village Hall committee and the Church Kneeler Group. She was a driver for community transport, a member of the Veg Club Plus which helped decorate the church porch for her thanksgiving service, and for six years a committee member, then chairman, of Hills Road 6th Form College PTA. She was also a member of the Friends of Holy Trinity Church and she spent many evenings serving suppers in the church meeting room.

As well as her work within and for the community, Sandra had a huge amount of time for her growing family. She was an extremely proud grandmother to nine grandchildren. The novelty of it being a boy on every occasion (bar one) did not seem to wear off and she greeted each arrival with as much enthusiasm as the first.

Each of the children hold different memories of their grandma but photos of her with the children show a loving, soft, calm, interested and thoughtful grandma – often with a book close by to read with them.

Sandra was a wonderful wife, sister, mum, aunt, grandma and friend and her death has left a huge gap in our lives. We shall all miss her so much.

A shorter version of Sandra’s obituary appeared in the April 2018 issue of Meldreth Matters.