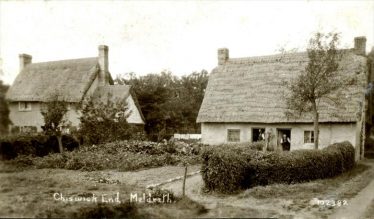 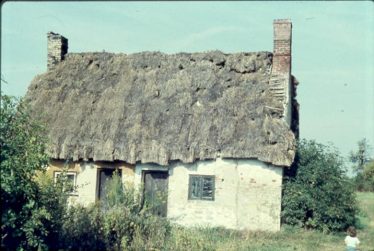 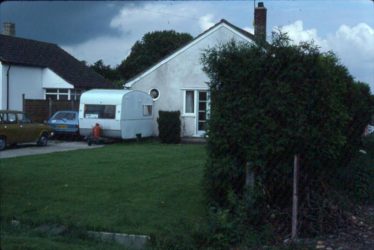 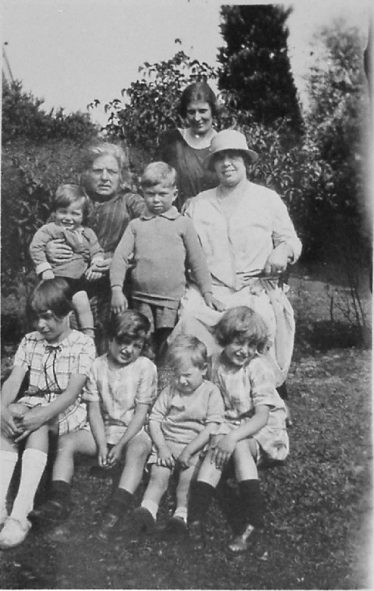 The Addlestone Cottages were located in Chiswick End.  They were built in the eighteenth century and demolished in the 1950s.

The following account is taken from W M Palmer’s lecture, “Richard Willowes Vicar of Meldreth 1692-1736” which was published in 1924.

Amongst the property belonging to the parish of Meldreth, is a double tenement in Chiswick End, known as Addlestone Charity.  From this way of describing it one might suppose that someone named Addlestone had willed it to the parish.  But it became a parish possession in a different way.  The following story of this house is derived chiefly from the parish accounts kept by the Rev. R Willowes.

In 1662 died a man named John Addlestone who had lived on Chiswick End Green, in a house which had only one fireplace.  Probably it was a cottage with a brick chimney in the middle, a living room on one side, a backhouse or storeroom on the other, and two bedrooms above.  In this he brought up a family of six children.  His son James inherited it after him.  John had other property, houses and land in the open fields.  He had dowered his daughters with half-acre strips, or sums of money and to Michael Lumpkin, afterwards tenant of the Sheene Mill, he left an ewe and a lamb.  Evidently he was a flourishing smallholder of those times.  But his son James fell on evil days.   He never seems to have had enough property to come within the scope of the parish rate collector and he could not even keep his house in repair.  His first appearance amongst the parish records is in February 1720 when the overseer allowed him 2s. a week “being sick” and from that date until his wife died in February 1722 and he died in October 1724, they were both receiving parish relief.


Soon after [his wife’s death] James Addlestone’s house fell down on the top of him, and the overseers paid 2s for removing his furniture, and the same amount for separating the timber and thatch from the dust and rubbish, when the rest of the house was pulled down.  Now as early as 1721 the overseers had obtained a “writing” from James surrendering the house to them on his death.  As it was copyhold, they now set to work to re-build it, having cleared the site by selling the timber and chips of the old house for 10s, and the dust and rubbish for 3s.  [A detailed account of the rebuilding shows that the cost of the new house was over £29.]  In 1723 Addlestone conveyed the property to the Overseers in trust for the poor and received £25 for it.  It was copyhold of the Sheene Manor, quit rent 1s 6d.  Seven shillings was paid for a copy of John Addlestone’s will, and the other legal expenses came to £1 8s 1d.

It does not seem to have been a good speculation for the parish.  In 1837 the two tenements were let for £2 and £1 10s.  The latest rents have been £4 10s and £3 15s, but these amounts have usually been swallowed up in repairs.

In the 1930s Sarah Ann Helena Bourne, also known as “Granny” Bourne lived in the cottages with some of her grandchildren.  The last tenant of the cottages is known to have been a Mrs Harland who was later rehoused in a bungalow in Bell Close.

The cottages were demolished in the 1950’s. The land was sold and there are now two bungalows on the site.