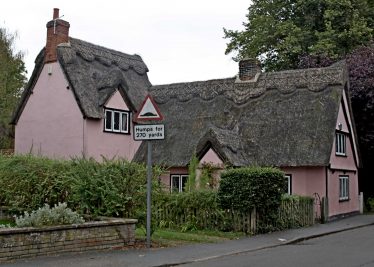 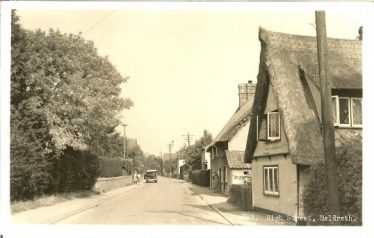 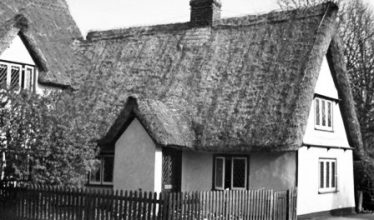 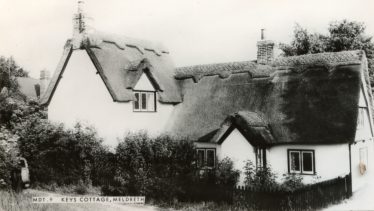 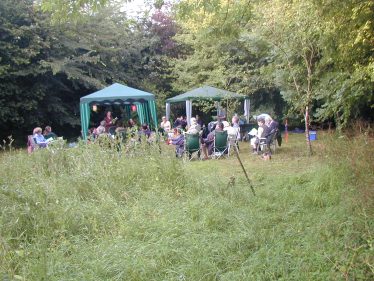 Keys Cottage was acquired in May 1954 by my father, Herbert Hunter and my stepmother. Sadly my father died five years later, but as a celebrated botanist he loved the place and started by planting roses. The rambler rose ‘American Pillar’ at the back of the left hand border outside the French windows was the first and is still, after 60 years, very vigorous. My stepmother planted the ‘Queen Elizabeth’ rose in the front garden and also the laburnum at the top of the lawn, the strong blackberry at the side of the greenhouse and the pear tree a little way down the orchard on the left. The greenhouse is also hers. The other rose of my father’s is the red rose at the top of the lawn, which still flowers.

My stepmother left the cottage in 1964 to live near her family in Warwick and I assumed responsibility for it, although apart from three years in the 1960s I was away working until 1981. The cottage was originally two cottages. The first was at the front and had a living room/kitchen with a ladder to the upstairs bedroom and a fireplace backing onto the one in the other cottage. This other cottage consisted of the present kitchen as the main room and stairs up to the present hall as a bedroom. The separating walls came where the door from the front porch and the door into the present sitting room, come. The larger room at the back looking onto the garden and the bedroom above were added only in the 1930s.

The present bathroom and lobby were a separate apple store with the bath house and an adjoining Elsan toilet situated in a little hut nearby. When my father took the cottage there was an old bath with a stone sink and a copper with fire grate and the chimney above still there. I had the wall knocked down between the bathroom and toilet which was removed and used the whole hut as a garden store. I also had the old asbestos garage, facing the drive and the side of the greenhouse, removed to allow a straight view down the orchard. I had the present garage placed at the side of the drive (a very poor buy from Banbury Buildings and I would liked to have replaced it).

I had, as an addition to the kitchen, a small conservatory built which allowed for a washing machine and microwave as well as plants and tools. In the largish upstairs hall I had a toilet and washbasin added.

The two old cottages which together formed the present cottage, were a part of the Manor of Flambards and originally occupied by tenants of the Manor one of which possibly had the name of Keys. It was a very humble dwelling in the past. I could find no deeds relating to it and my guess is that it dates back to the early 1800s. [The cottage is listed and according to the listing dates from the 17th century.]

As I was away in the 1960s when all the houses in the High Street were put onto mains drainage the cottage still relies on a cess pit as does my neighbour opposite. In 2013 workmen dug a trench from the main pit through under the garage and joined it to a main pipe taking it across the orchard to a sump marked by a post next to the large buddleia.

Now to the garden, orchard and land over the river. Outside the French window on the right is a large syringa and on the left a pink weigela  which I planted. There were two herbaceous borders from there to the lawn which I replaced the right one with paving and then a small pond with rockery. On both sides of the orchard there are large ash trees and there were three enormous Bramley apple trees two of which are still standing and produce prolifically even though planted 80 or 90 years ago and never properly pruned. I planted a further one at the end of the orchard which is carefully kept in check. Throughout the orchard I have over the years put in more trees: rowan, cherry, false acacia, prunus, maple, whitebeam and hawthorn.

The straggly greengages on the right side, remnants of the orchards of the long past in Meldreth, predated our arrival. The lovely white poplars at the end were also planted up to 80 or 100 years ago.

The old chicken house was here when we arrived. On renovating it we unearthed an old pottery beer flagon with china stopper and its inset still intact with Jarman & Co.Meldreth inscribed on it. It, together with a number of small pottery jars which I kept with the lovely beer flagon, were taken during one of two burglaries I suffered. I started keeping hens in the 1980s and enjoyed supplying friends and neighbours with eggs but when they were all killed by a dog in the 1990s, I gave up.

The land over the river is  all part of the property like others along the High Street, dating back to the time when the original river in the deep ditch at the very end of the copse beyond was diverted to serve Flambards Mill, remains of which can be seen at the end of Flambards further down the river. The meadow has cowslips and other wild flowers which I have tried hard to encourage. When my father explored, he found an asparagus bed near the entrance to the small copse at the bottom.

I have lovingly planted it with an assortment of hawthorn, beech, rowan, hazel, prunus and cherry. There is still a marvellous old chestnut at the bottom by the ditch, one of the three originally there, as well as one or two old fruit trees remaining from the original orchard which covered the whole site over the river.

Next to this area is the designated Local Nature Reserve, Melwood, again  an extension of the Primary School land over the river and consequently owned by the County Council.

Soon after I came back for good to Keys Cottage and while on the Parish Council I persuaded them to approach the County for permission to maintain it on their behalf. It was in a very wild state having been sadly neglected over the years. Once the County agreed I set to work with the few hardy souls I enlisted to clear the area as much as possible of bramble, nettle and ivy. Then I started planting new trees mostly at the front – white beam, birch, cherry, field maple, willow, hazel and beech which are all doing well. The local Guide Company planted daffodils. Of course there were those purists who complained all these new additions were not native species. I felt and still feel that they were all attractive additions to what was before a jungle. By the 1990s, when I was then heavily involved in my work on the County Council, I had to reluctantly step back from my activity in Melwood. A committee was formed to take over the management of the wood on behalf of the County Council and saw the establishment of the Local Nature Reserve which hopefully will protect it from any future development.

I have watched their work over the last 20 years and having been very involved from the very beginning obviously I do not always agree with their decisions which adhere rigidly to the Management Plan set up with the County Council. Ground cover and light is very important but so is the health of the trees which make up the wood. I do feel with the good finances now existing more young trees should be be planted to gradually take the place of the number of old and dying trees particularly at the back. However it is lovely to see the wild flowers spreading – snowdrops, aconites, daffodils a few primroses and flowering blackthorn in the spring. I was delighted to see that my patch of aconites just inside the gate by the river is so much larger than before as is the same nearer the cottage. My great joy is to see new life always emerging, however threatening the weather.

On my death I have willed my land adjacent – meadow and wood – to be incorporated into Melwood Nature Reserve and maintained as an attractive addition to the site.