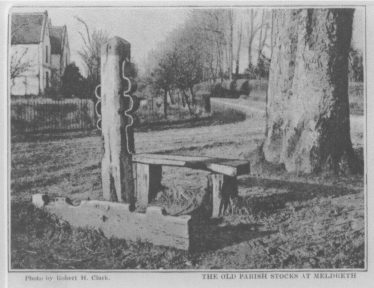 zoom
The remains of the stocks and whipping post, 1903 or earlier
Robert H Clark Postcard 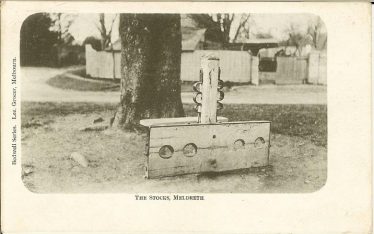 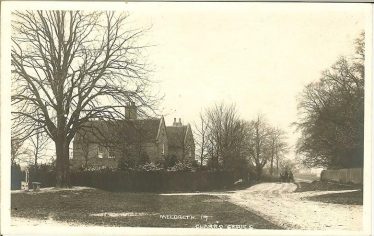 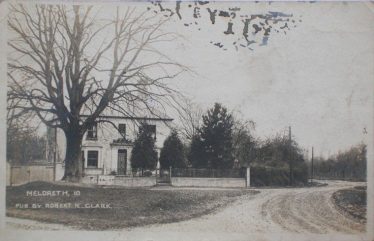 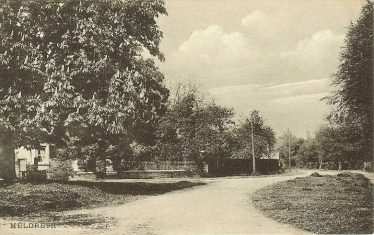 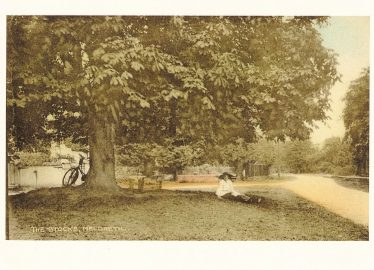 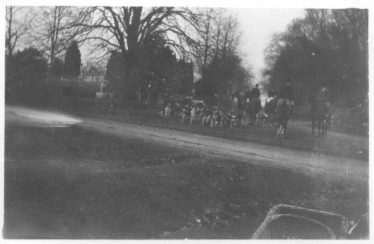 zoom
A hunt meeting at the stocks, February 1923
Photograph courtesy of Ann Handscombe 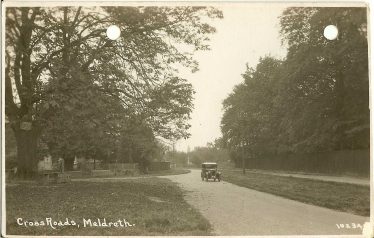 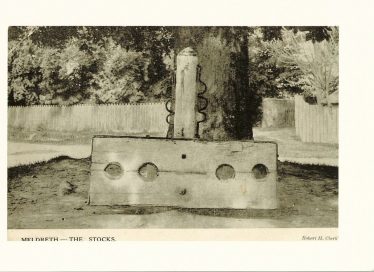 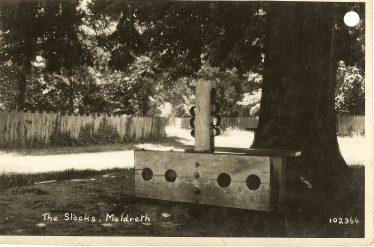 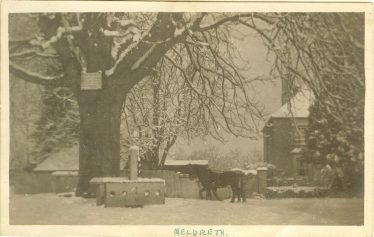 zoom
The stocks and whipping post in winter c. 1935. The horse belonged to the Adcock family.
Photograph courtesy of Ann Handscombe 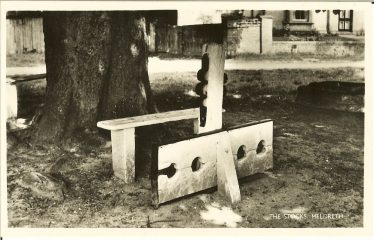 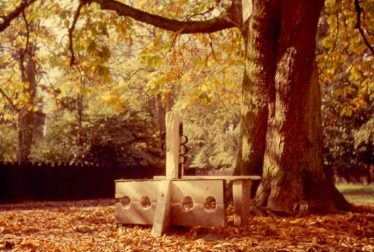 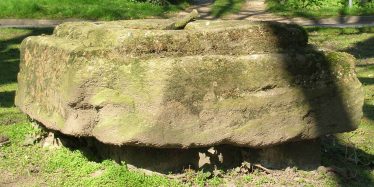 zoom
The cross base on Marvell's Green. W M Palmer measured it as 36 x 46 inches.
Photograph by Kathryn Betts, March 2011 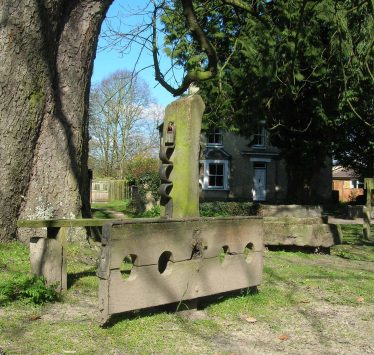 The stocks and whipping post are one of the key landmarks of the village.  They are situated under a splendid chestnut tree on a triangular piece of grass known as Marvell’s Green, at the junction of the High Street, North End and Fenny Lane.

Stocks are often situated close to the church but in Meldreth they always seem to have occupied their present position, possibly because it is near to Meldreth Court, the former residence of the Marvell family.  The Marvells may have exercised some judicial powers.

Stocks were part of the medieval justice system, which was usually in the hands of the Lords of the Manor.  However, in Meldreth the court leet, or petty sessions, were under the Earl of Clare.  Records of the Court date back to 1323 when fines were handed down to a beer taster for not doing his job properly and some women bakers for giving short weight.

England’s second Statute of Labourers (1350) prescribed the use of the stocks for “unruly artisans” and required that every village erect a set. They have never been formally abolished.

As well as having rotten waste thrown at them the offenders were often also subjected to tickling on the feet, often by the young boys of the village.

Dr W M Palmer recounted in a lecture in 1927 that in 1342 there was an altercation, probably near the stocks, when Robert Hales, the deputy bailiff of the Kings Hundred of Armingford was shot by an arrow and died two years later.  Two tramps had been travelling through Meldreth and had a dispute with some of the servants of John de Regges, who owned part of Vesey’s Manor.  When the deputy bailiff appeared to try and calm the situation down he was shot.  The culprit ran off and was not apprehended.

In Meldreth Parish Records, Dr Palmer lists extracts from Henry Knight’s Constable’s Accounts for the village from 1696.  The accounts include an amount of 1s paid to Robert Cowling for whipping Eliz. Liley.  We don’t know why Elizabeth was whipped, but it must have been a severe beating: 1s was often as much as was paid for a day’s work.

The Whipping Act was passed in England in 1530 and was originally targeted at vagrants. The public whipping of women was abolished in 1817 (after having been in decline since the 1770s) and that of men ended in the early 1830s, though not formally abolished until 1862. Private whipping of men in prison continued and was not abolished until 1948.

It is thought that the stocks were last used in 1860 as a punishment for brawling in church.

Alfred Kingston in “Fragments of Two Centuries” (originally published 1893, reprinted 1990) indicates that Meldreth was alone on the Cambridgeshire side of Royston as still having its old Parish Stocks due to Mr George Sandys, of Royston, who “restored” them.  The upper part had been lost but was found and placed in position by Mr. A Jarman of Meldreth.

In July 1980, the stocks were struck by a car and lay in pieces until they were repaired by a village resident.

The stocks have been a popular subject for postcards and personal photographs as evidenced by the large number of views in our photo gallery.  Please click on one of thumbnails below to start browsing through the gallery.

Also on Marvell’s Green, is the base of a cross which, according to Beatrice Clay ‘s account in 1942, was found in the garden behind the village shop c. 1888-9 when a drain was being dug.  It was placed on the Green by permission of Mr Mark Palmer.  Another cross base is located in a garden in North End.