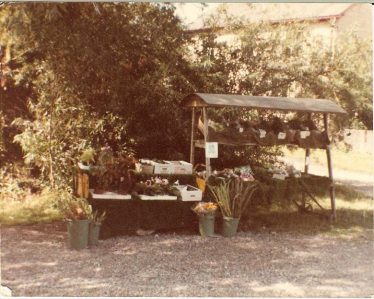 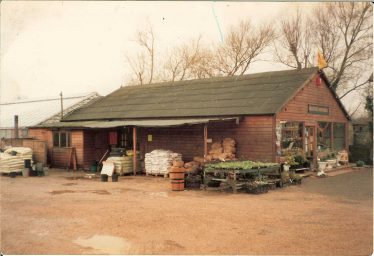 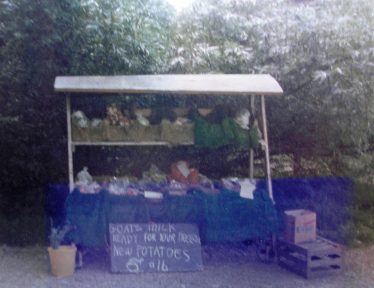 Doreen and Arthur Ward came to Fieldgate, Station Road, Meldreth in 1969.  Doreen was born in Oakham and later lived in Windsor. Arthur had been working for BEA at Heathrow and he and Doreen decided to escape the ‘rat race’ in London for a quiet country life with their two sons, David and Andrew. They never stopped working, however.  On the first day of their new life in Meldreth they had the kitchen table out on their driveway selling seedlings that they had propagated.  They made a grand total of 2 shillings and sixpence (25p)!

In 1970 a purpose-built barrow with a canopy replaced the table and they were then able to extend their range of plants, flowers and tomatoes. By then, Doreen and Arthur had acquired several goats, which were milked twice a day, and so they were able to sell organic goats’ milk in addition to their other goods.

According to Ian Course, the stall or “Wooden Horse” as it was nicknamed (see photographs) was made by his father, Raymond Course, for Mr & Mrs Ward. The iron wheels came from an old porter’s barrow found on a scrap heap.

By 1982 the first shop had been erected and a further extended range of produce including fruit and vegetables was available. Several years later an even larger shop was built. Doreen and Arthur were then joined in the business by David and Andrew, and introduced groceries and many other goods.

Doreen died in 2007, and Arthur some years earlier, but Fieldgate Nurseries continues to be an asset to the people of Meldreth and other nearby villages.