Gilly describes the carved beams in the living room of Bramble Cottage (1 min 13 secs)
A transcription of this audio clip and a photograph of Gilly can be found at the bottom of this page. 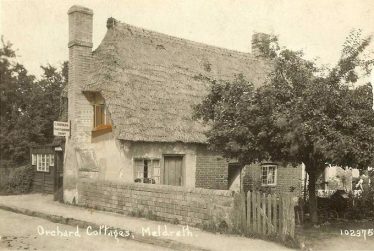 zoom
Bramble Cottage ~1930. The cottage is named Orchard Cottage on this postcard. Note the sign for Mr Norman, cobbler. The photo clearly shows that the cottage housed 3 families.
Bells Postcard 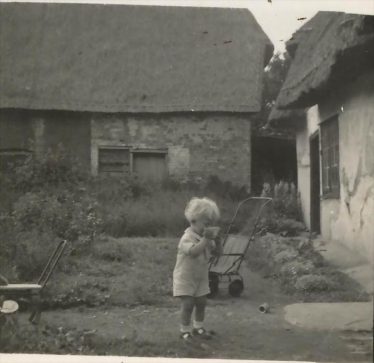 zoom
Roger Winter in Jarman's Yard ~1940 - 45. Orchard Cottage is to the right with Bramble Cottage in the background
Roger Winter 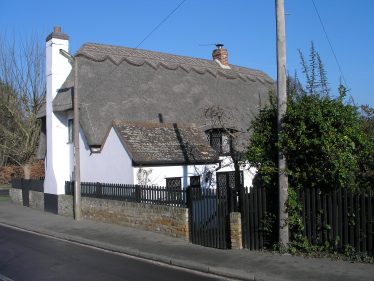 zoom
Four views of the carving on the roof beams in the lounge of Bramble Cottage.
Photographed by Tim Gane in February 2008 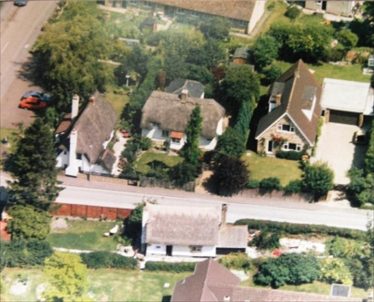 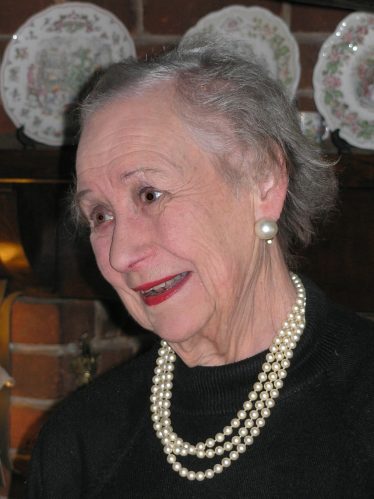 Bramble Cottage, which stands on the corner of Elin Way and Whitecroft Road, was the home of Doris Gilham until she passed away on April 17 2010.  Known as Gilly by everyone in the village she was a well known and loved member of the village renowned for her poetry.  An example of which can be seen on page 7 of this document about the History of Meldreth WI.  Gilly was an active member of the WI.

Bramble Cottage used to be a little two roomed cottage when it was originally built in ~1630. It has been enlarged over the years and was actually three, separate dwellings by the turn of the 20thC.

Along with the two dwellings in the adjacent Orchard Cottage (now Applecote Cottage), these five dwellings made up Jarman’s Yard.  It is not known if there was any connection with Jarman’s Brewery in North End.

In the 1920s Mr Norman, the cobbler, and his family lived in the rear of the cottage where he raised 14 children in the one up, one down dwelling.  The rooms were approximately 10 foot square.  Mr Norman’s workshop was attached to the side of Bramble Cottage (see photo). Later, in the 1930s, the workshop was taken over by Mr and Mrs Tommy Miekel who used it as a sweet shop.  Tommy lost a leg during the war and worked at The Atlas.  He used to take sweets and cigarettes to work to sell there.

Doris Beech and her parents lived in the front of the cottage around this time before they moved to Allerton Terrace.

In the 17thC the cottage was known as Kitt’s Cottage but the name has changed several times over the years.  The postcard on the top of this page is entitled Orchard Cottages so it is possible that this was the name at around this time.  When Gilly and her husband bought it in 1978 it was called Badger’s Rise but as they had to use secateurs to cut through the brambles to get to the front door they renamed it Bramble Cottage.

The Carvings in the Beams of the Living room in Bramble Cottage.

On February 8th 2008 Gilly invited members of the History Group into her cottage and gave us a tour of the property showing us the many interesting and varied features.  We have extracted a small clip from the one hour recording of our visit to tell you about the unusual carvings on the beams in the living room.

You can hear Gilly speaking about the beams if you click on the ‘play’ button on the audio clip at the top of the page.

When we bought the cottage it was 350 years’ old, we’ve been here for 30 years so it is now 380 years old.  The beams date from 1635 and we thought they were ship’s timbers but when my husband was in Addenbrookes he met up with one of the professors who said “No – too far from the coast for ship’s timbers.”  He thought, looking at them, that when the monasteries were destroyed people went in and helped themselves and he thinks they had been pinched because actually they’re not Navy.  Sometimes the pattern is strung, sometimes the pattern is short, it’s very very primitive carving.  It’s not thought that the patterns denote anything – they just said that they were very simple carvings, there was nothing terribly outstanding but we think they tie in with the monasteries. There is no carving on some of the beams as the cottage was one up and one down and this was where the staircase went up.