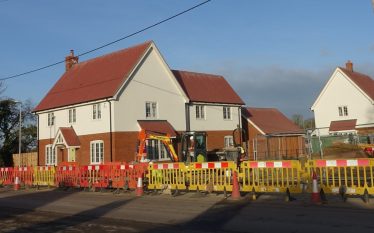 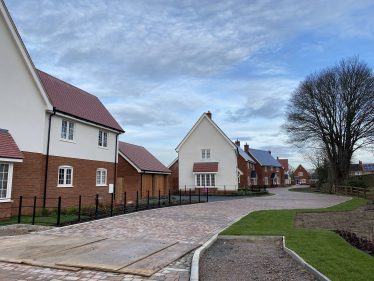 Interesting evidence of the early history of our village recently emerged as a result of archaeology undertaken prior to the construction of the Westacre development; nine new homes off Whitecroft Road. Developers are sometimes required to commission archaeological investigations as a condition of their planning approval, and this was the case here.

A series of test pits dug by Archaeological Solutions Ltd showed that there had once been a large hollow on the site, probably of glacial origin. These are fairly common in the chalk landscape of Southern Cambridgeshire. There are other notable examples at Melbourn and at the Hinxton Genome Campus. The test pits showed that lower levels of the hollow contained fragments of worked flint and Neolithic pottery. These may possibly have been washed into the hollow over time. It is likely that a water filled feature like this would have attracted, at least seasonally, prehistoric activity because it could provide water for livestock or attract game and wildfowl which could be hunted. The higher levels of the fill included pottery and other material which suggested that there was Roman and medieval activity somewhere in the vicinity of the site.

All this is consistent with the findings of the Meldreth Local History test pitting project conducted in 2013. Some 32 test pits were dug by volunteers throughout the village and the flint and pottery found suggested that there had been a significant prehistoric presence in and around Meldreth.  Roman pottery also suggested Romano-British activity. The majority of the finds, however, were from later periods and suggested that the village had formed in the late Saxon to early Norman period – perhaps in the vicinity of Holy Trinity Church – and had then expanded rapidly. It then appeared to go through a period of decline starting in the late medieval period and which continued until it reached the growth experienced in the past few centuries.

Although both the 2013 project and the Whitecroft Road excavations employed test pitting there were interesting differences in the way the technique was used. The 2013 exercise used individual one-metre-square test pits to obtain samples from widely spread locations around the village. Each provided some dateable material which helped create a picture of the way the different parts of the village had developed over time. In Whitecroft Road the target was much smaller and a series of two-metre-square gridded test pits were excavated in a chequerboard pattern which allowed around 50% of the hollow to be covered.

It is remarkable what can be learned about our past through archaeology. Even though no written records exist, an analysis of flint, pottery, artefacts and environmental samples can paint a picture of our past. If you would like to learn more about this then visit the other archaeology topics on this website or visit the Meldreth sections of the Cambridgeshire Historic Environment Record website.

The full planning information for the site (reference S/0241/18/FL) can be found on the Greater Cambridge Shared Planning website. The archaeological reports may be viewed by clicking on the download links below.