The land in Meldreth was enclosed in 1820 by order of an 1813 Act of Parliament “for inclosing Lands in the Parish of Meldreth and for allotting lands in the Parishes of Melbourn and Whaddon in the County of Cambridge”.

Although the first of England’s Enclosure Acts was passed in 1604, it was not until the 1790s that parliamentary enclosure got underway in Cambridgeshire. The enclosure of neighbouring villages took place in the following years:

In medieval times, farming was based on large open fields in which individual yeoman or tenant farmers cultivated strips of land. These strips of land would be scattered around the village. There was also common land, on which villagers had a right to pasture cattle, collect turf or firewood, or cultivate crops for example. Vestiges of the open field system remain in the village today: for example, some of the old field names including Hollow Field, Manting Field and North Field have been used as house names.

The motives for enclosure were complex. Generally, the enclosure of agricultural land was seen as a more economical way of farming and the impetus to enclose came from landowners who thought it would allow them to charge higher rents and also from tenant farmers, who believed it would enable them to improve their farms.

Originally, enclosure took place through informal agreement and, just as in Meldreth, small enclosures had been arranged privately between landowners for many years. However, during the seventeenth century the practice developed of obtaining authorisation by an Act of Parliament. A separate Act was required for each village that wished to enclose its land. Between 1604 and 1914 there were over 5000 enclosure acts which affected over a fifth of the total area of England.

Three commissioners were appointed to oversee the act of enclosure in Meldreth: Martin Nockolds, William Custance and Anthony Jackson. They held their first meeting on 8th July 1813 in the Red Lion, Royston following  a notice which was “affixed on the principal outer door” of Holy Trinity Church in Meldreth and advertisements that were placed in the Cambridge Chronicle newspaper. They were assisted by a surveyor, Edward Gibbons of Great Shelford.

The acreage of the surveyed land in the village is shown in the table below.

The Commissioners and the Surveyor produced a detailed map of the village (shown in the gallery below) together with the Award Book, which details the boundaries of the village at the time and lists all of the roads, footpaths and drains together with details ownership of each plot of land. Cambridgeshire Archives holds at least one copy of the Meldreth map and the Award Book. Another Award Book and an annotated map (shown in the gallery below) are held by Meldreth Local History Group.

A special meeting was held by the Commissioners in 1820 (see newspaper advertisement in the photo gallery below) to go over the arrangements for enclosure.

After enclosure, a farmer’s scattered strips of land would be consolidated and put together in a block. This meant that a farmer would have more autonomy over how his land was farmed. In general, enclosure improved agricultural productivity. It could also result in improved quality of land, through drainage for example.

Enclosure brought considerable changes to the landscape. Farmers or tenants would often enclose their new plots with hedges, fences or walls and build access roads and farmhouses on their new land. This could result in considerable expense for the farmers and tenants. In addition, drains, brooks and watercourses running through their land also had to be scoured out, repaired and maintained. Footpaths and rights of way were also changed.

There were other disadvantages, apart from increased expenses. Enclosure sometimes led to the eviction of farmers who couldn’t prove legal entitlement to the land and to villagers who owned no land but had previously been entitled to use common land. Poorer farmers could not compete with large landowners.

Population fell in some villages following enclosure, although this does not appear to have been the case in Meldreth.

Both the enclosure map and the accompanying Award book can be useful documents for local and family historians, revealing much information about the village and its inhabitants in the early years of the nineteenth century.

In 2017 the map was used to establish riparian duties in respect of a former ditch in North End. Although the ditch had long been filled in, its existence on the 1820 map was sufficient to deem that riparian responsibility for fallen trees rested with the landowner!  See page 38 of the May 2017 issue of Meldreth Matters.

Clicking on the download link below will give access to a fully searchable transcription of the Meldreth Award book, completed by Arnold Stanford.  When searching, please bear in mind that there may be differences in the spelling of names and places.

We are indebted to Arnold for the many hours of work involved in completing this transcription for us. 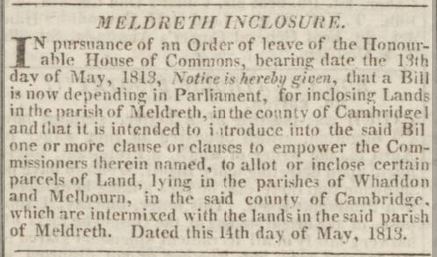 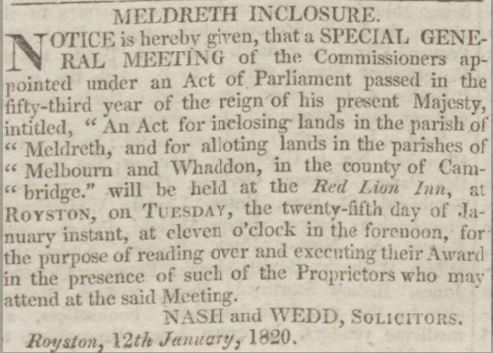 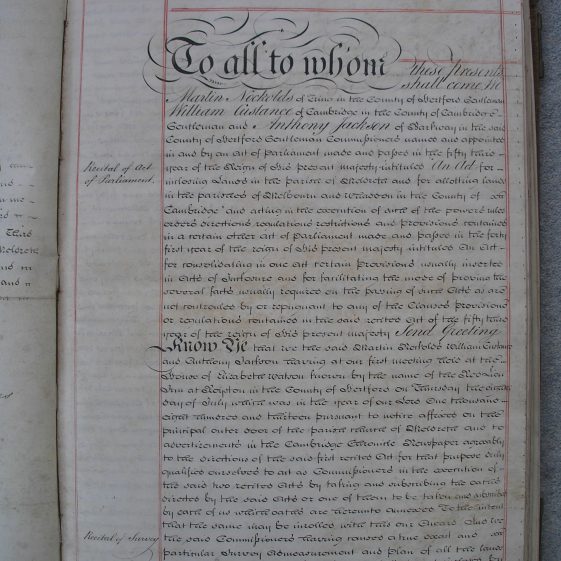 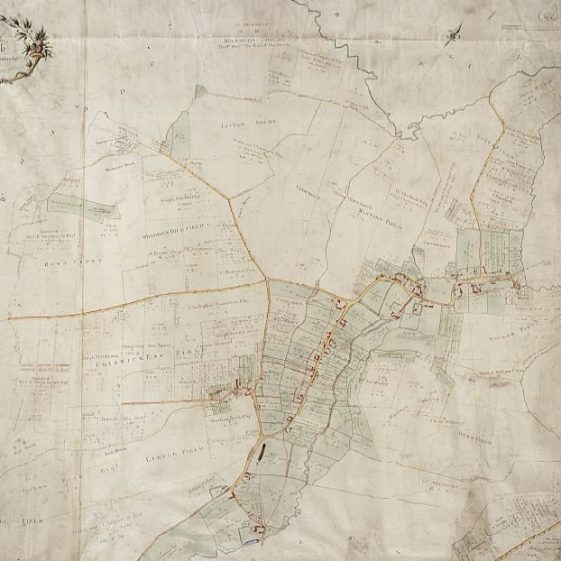 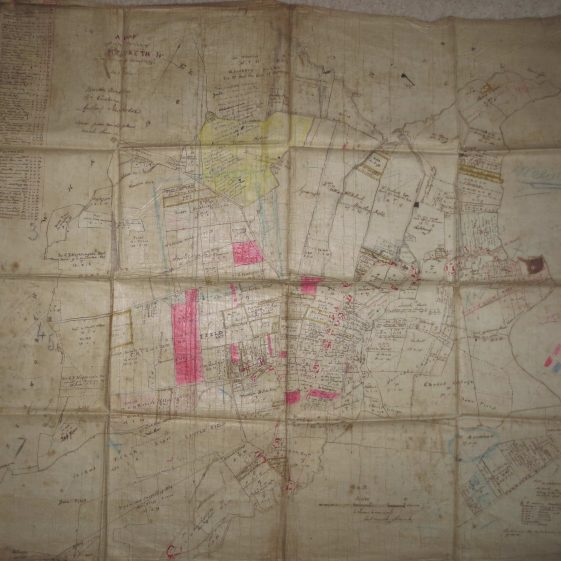