At the south end of Meldreth there are a number of unusual pillars on the side of some roads. These rather nondescript and not easily noticed structures are sewage ventilation pipes or more colloquially stink/stench pipes. They tend to be taller (6-8m) and wider (15cm) than most of the other poles in the village.

They have several functions:

Firstly, they are pressure release valves used to prevent a build-up of gas pressure in the sewers. Gas accumulation usually happens when sewage is being pumped long distances or on a higher plain than the sewage plant or due to a blockage. An accumulation of gas can slow down the flow of the sewage which can then become septic.

Secondly, they ensure that any of this gas (corrosive Hydrogen sulphide which gives a rotten egg smell) is vented off at a height well above that of the human nose. As sewer gases can be heavier than air, it is necessary for the wind to disperse them before they can settle at ground level. Some residents have mentioned that in the 1960s one could sometimes detect a faint rotten egg smell around the base of the pipes. Fortunately, the rotten egg smell has now disappeared due to improvements in the sewage system and less gas accumulation.

Although underground sewage pipes run throughout the village there are only a few places where I have found the pipes. In Meldreth they are located at:

Initially I thought that there were none towards the north of the village but since completing the page I have received details of one at Brewery Lane.

The positioning of most of the pipes is similar to that in Melbourn where they are mainly located on a line from Water Lane to Station Road.This maybe related to the fall of the land past the sewage works and towards the pumping station near the Eternit site on the Whaddon Road.

The next one I have found is in Fowlmere Road in Shepreth.

There was a sewage works behind where Bell Close numbers 1to 10 are now.  This was demolished in early 1970 (approximately).   The current one is to the east of the British Queen near the railway line and the River Mel.

The ventilation pipes are normally constructed of cast iron which has then been covered in concrete. Concrete on its own would not last long as the hydrogen sulphide gas literally eats the concrete. Interestingly, the one at 65 Whitecroft Road has the iron revealed. It is not clear whether this is because the concrete covering has been removed or was never applied.  This one also has an unusually ornate base and top. Some have an access point at the base.

The manufacturer of one in Harston is still in existence: Ham Baker & Co Ltd. I have not been able to find a manufacturer’s name on any of the Meldreth pipes.

Stench pipes may have been first constructed in London after the “Great Stink” of 1855. It’s not clear when they were first introduced to Meldreth. However the full sewage system arrived in 1963, so they were probably installed around that time.  John Gipson mentions a sewage system being introduced in the 1960s near his garage and there are pictures of the construction on the CCAN site. A full water supply had arrived in the village in 1935 (despite protests), although there had been an earlier supply to part of the village in the early 20th century which lasted until 1914.  In fact Mr H. O. S. Ellis, a prominent member of the village community who protested at the water supply installation said

“It’s not going to end here, it will be a ‘Sewage Farm’ next and we shall have the devil to pay.”

He was right about the sewage farm as there was a planning application approved in 1963 for extension of the existing sewage disposal works at the current location, north east of the river Mel by the A10 road bridge. Presumably, as this was an extension of the existing works, there must have been some previous system in place. In 1964 there was planning approval for the construction of a sewage pumping station at Whaddon Road. This is still in existence, metres away from the Marley Eternit site. This may explain the line of pipes along Whitecroft Road into Kneesworth Road.

Prior to sewage systems, most household waste found its way to an outflow; usually a stream, river or the local pond or was collected by hand from the outside toilets or cesspits by “night soil men” and used as manure on local fields. Several older residents have described cess pits in their gardens when they were children before the sewage system arrived.

Now the developers for new housing/industry decide themselves how they vent their sewage network. These plans are not always to the liking of the water authorities as some of the new systems have proved incapable of coping effectively with the build-up of pressure.

The following websites provide more information and pictures of pipes elsewhere in the country:

If you have any information on local stench pipes or the introduction of the sewage system in Meldreth please contact us.

Much of this information has come from an article in the Melbourn Magazine issue 89 (Spring 2017) written by Peter Simmonett. 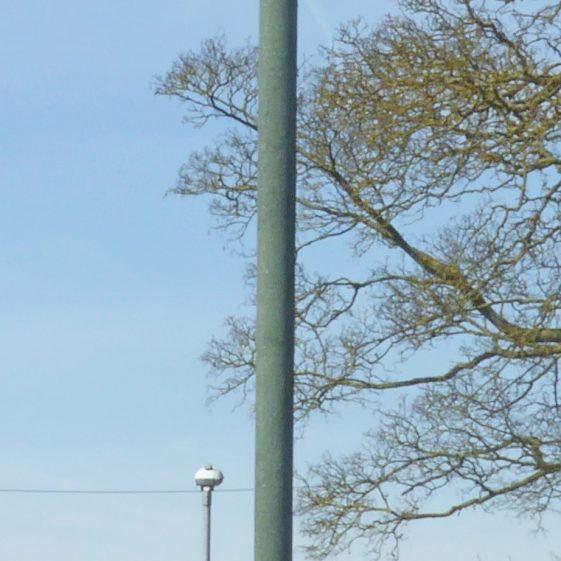 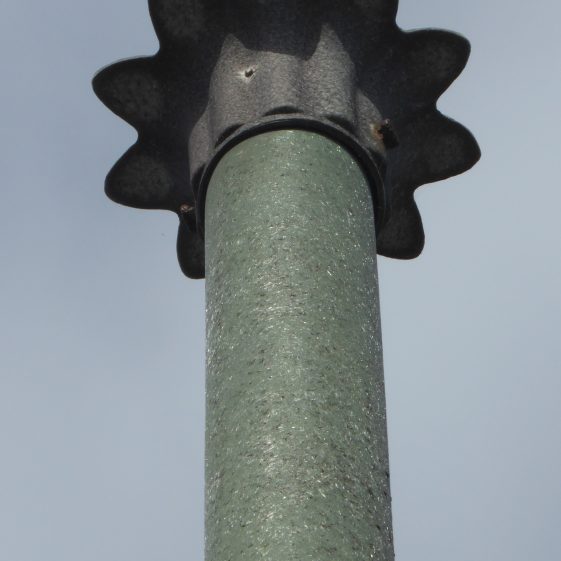 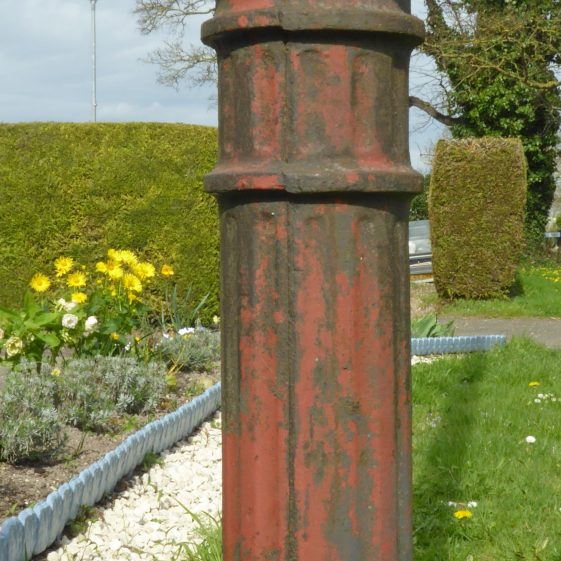 Base of pipe outside 65 Whitecroft Road
Bruce Huett 2017 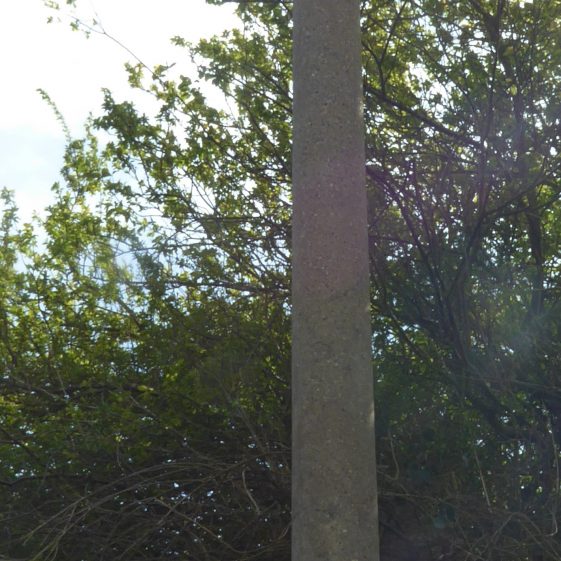 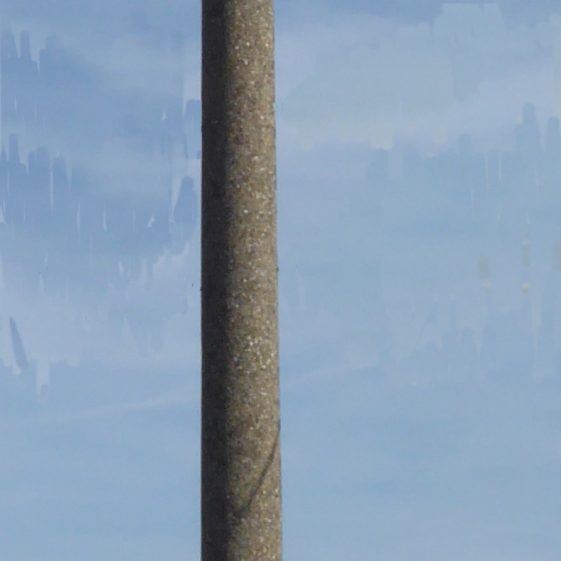 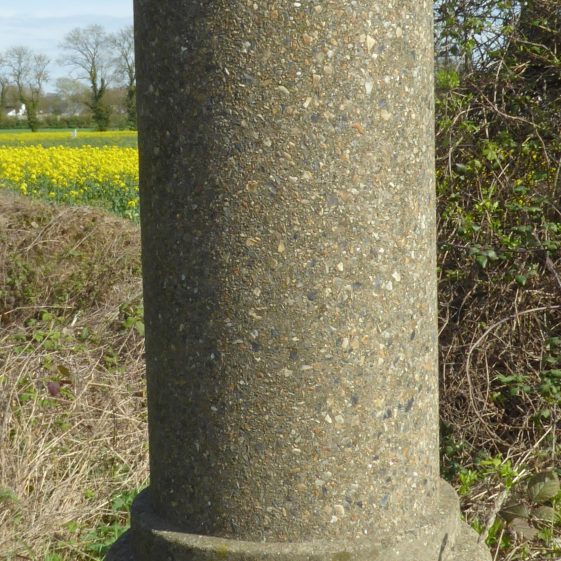 Base of pipe on Kneesworth Road
Bruce Huett 2017 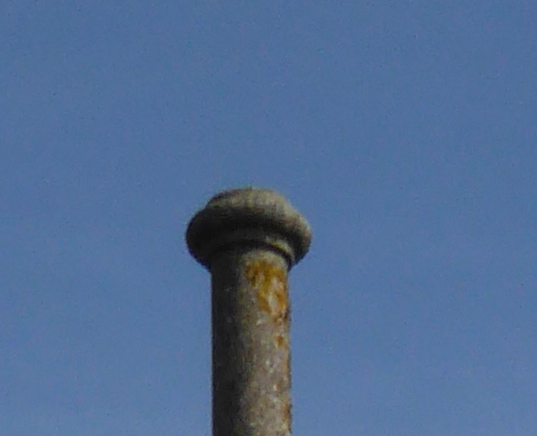 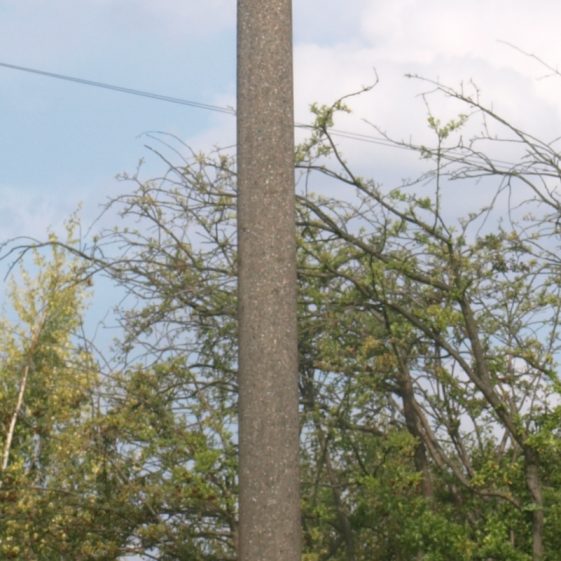 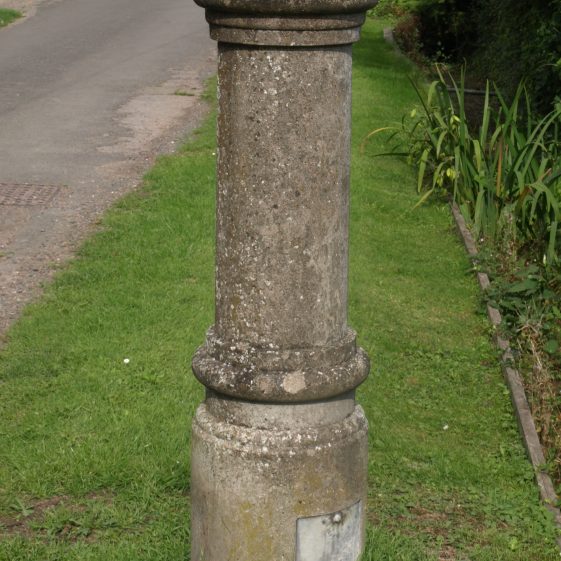 Base of pipe outside 35 Chiswick End
Bruce Huett 2017 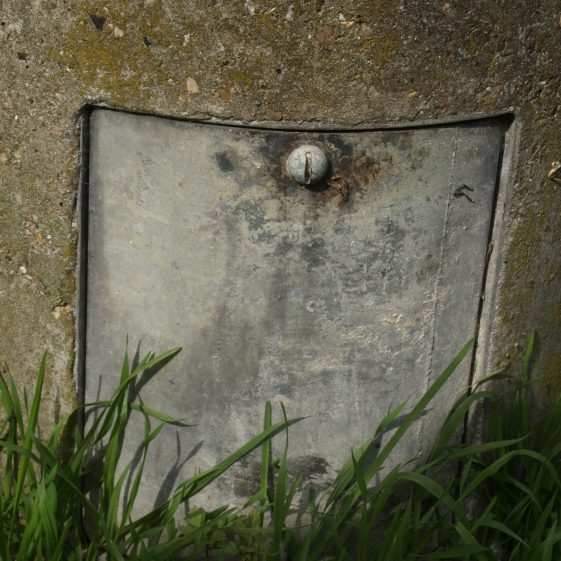 Base plate of pipe outside 35 Chiswick End
Bruce Huett 2017 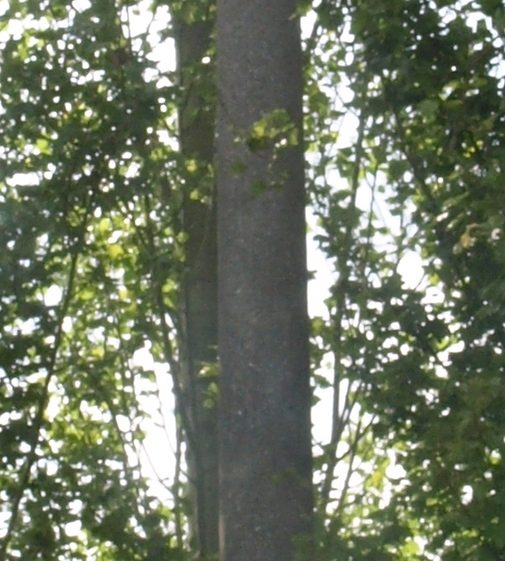 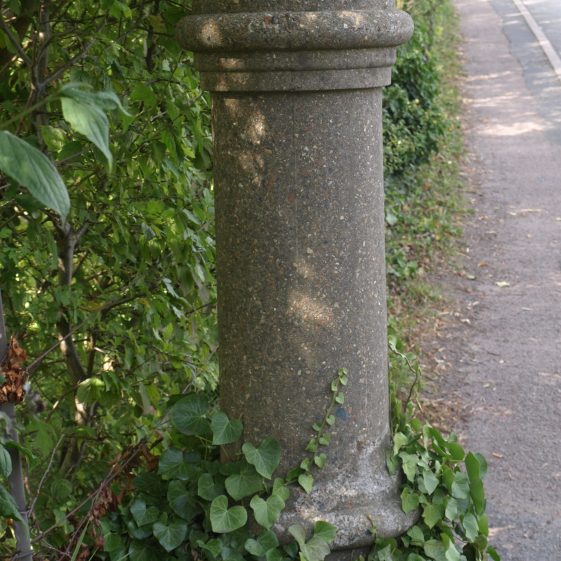 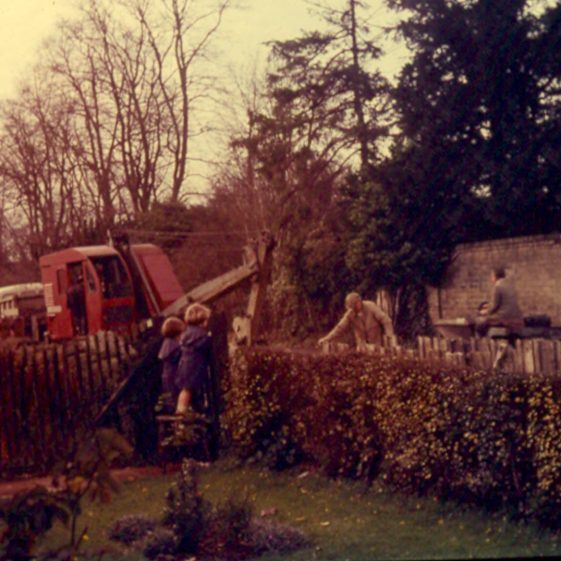 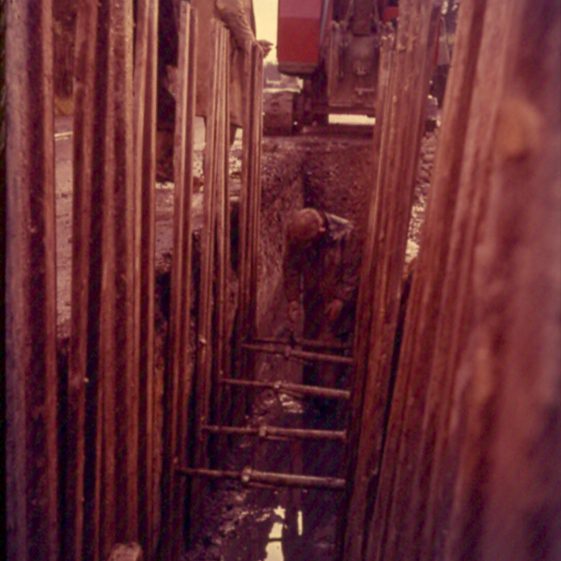 Mains sewerage being connected near 83 High Street in 1963.
Photograph supplied by Ann Handscombe 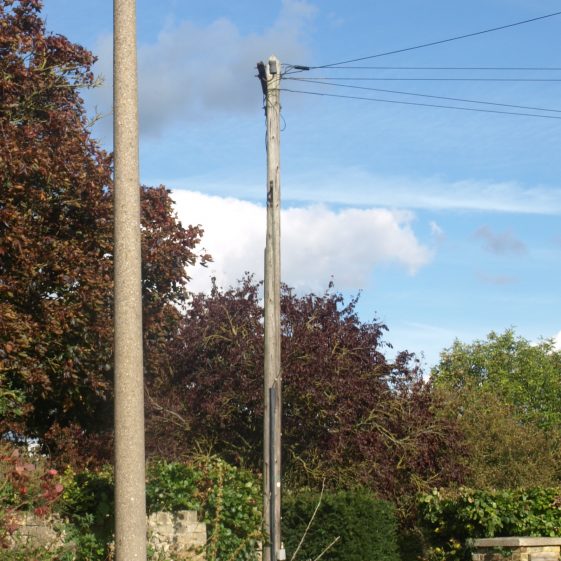 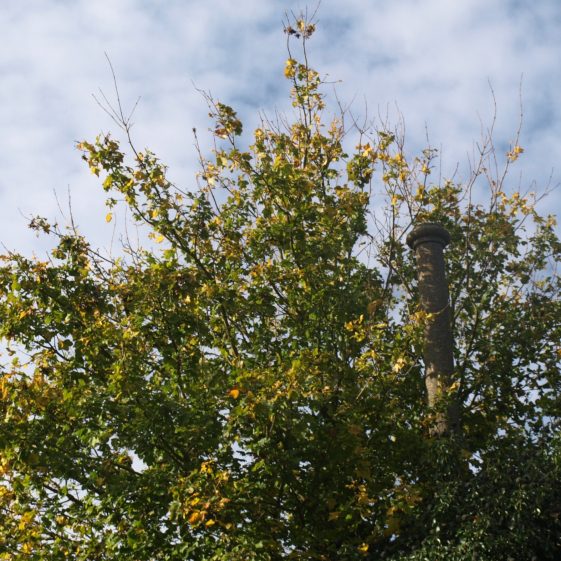 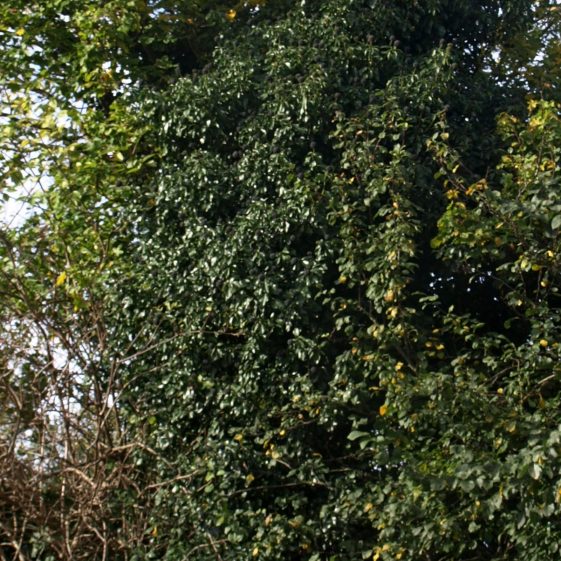