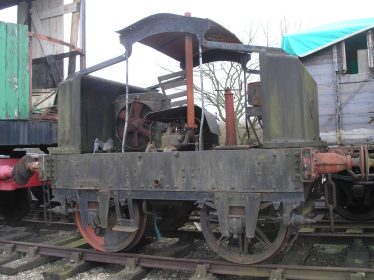 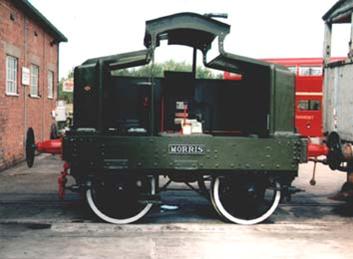 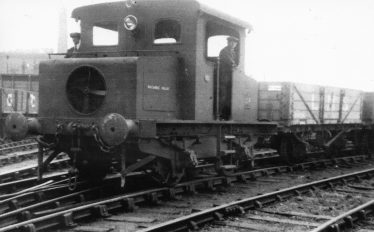 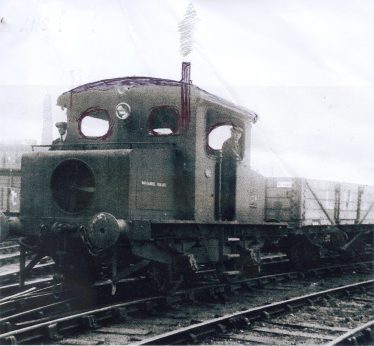 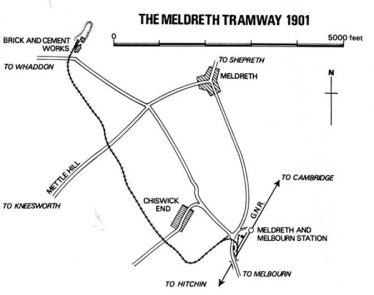 zoom
Map showing the route of Puffing Billy from the factory to Meldreth Station. The line was initially installed in 1901 by the Meldreth Portland Cement Company and ran for 1.5 miles.
Source: Industrial Locomotive Society , (Industrial Railway Record, Sep 2002, No 170, p93) 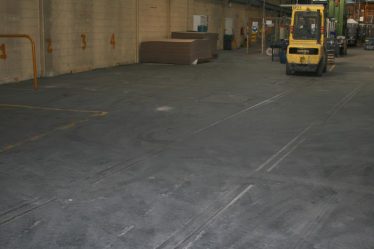 zoom
Puffing Billy tracks can still be seen in the factory today and also embedded in the road at the top of Chiswick End.
Photo by Malcolm Woods 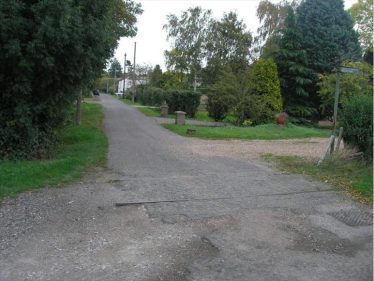 Puffing Billy was the ‘affectionate’ name given to the locomotive that ran on the Meldreth Tramway between The Atlas Stone Company Ltd and Meldreth Station during the first half of the Twentieth Century. In actual fact there were two locomotives, both powered by petroleum spirits and whether or not they ‘puffed’ is a point for conjecture.

The first Puffing Billy was an 0-4-0 Simplex petrol engined shunter numbered 2029 built by Motorail Simplex of Bedford in 1920 for British Portland Cement Manufacturers Ltd. (BPCML), in Northamptonshire. It had a Dorman 4 cylinder 40 horse power engine which was very thirsty on petrol and very expensive to run.  The engine provided power via a two speed gear box directly to the wheels by a chain drive.  The Simplex was able to move both forwards and in reverse.

It was bought by The Atlas Stone Company in Meldreth ~1928 where it was used to pull trucks of finished products from the factory to Meldreth station and raw materials back to The Atlas.

It is believed that the Simplex was only used for a short time (~1 year) before it was sold back to BPCML for use at their Saxon Cement Works in Cambridge. It was subsequently transferred to their Norman Cement Works at Cherry Hinton where it was used for shunting wagons between the coal stage and the British Rail exchange sidings. After being out of service for many years it was presented to the East Anglian Railway Museum at Chappel and Wakes Colne Station, Wakes Colne, Essex in 1970 where it remains today. It is currently unserviceable after frost damage and is awaiting repairs and renovation.

Sadly there are no photographs of the Simplex during its time in Meldreth.

A link to a PDF document detailing the Simplex locomotive can be found at the bottom of this page.

The second Puffing Billy was a French built Gaston Moyse Locotracteur which was acquired by The Atlas in 1929. It is believed that this was a secondhand engine, having first been used in France during WW1. This was again a petrol engined shunting engine but this time the engine powered a generator which produced electrical power to two electric motors connected to each of the two axles of the locomotive. The original engine was eventually replaced with a Leyland engine and it is believed that the horsepower was ~90 and the petrol consumption between the station and the works (~2 miles) was ~ 4 gallons.

The system was rendered obsolete ~1942 and the engine was sold for £40 to Mr Dean, scrap metal merchant who, it is believed, sold it on to T.W. Ward who removed the track in 1954. (ref: The Industrial Locomotive No 93). We do not know the ultimate fate of this engine although it is reasonable to suppose that it was eventually broken up.

Again we do not have a photo of the engine in use at Meldreth, although Ken Winter and Brian Pepper both remember the engine and have modified a photo of the Gaston Moyse engine to illustrate the differences between the 1929 locotracteur and Meldreth Puffing Billy.

A link to a PDF document of the Gaston Moyse engine can be found below.

I am indebted to John King of Upminster for his help in compiling this page.

We always called it the ‘Puffing Billy’, as to why, I have no idea. It had no connection with anyone called Billy and it certainly didn’t puff!

I only observed this strange ‘push-me-pull-you’ machine trundling into the goods yard on a couple of occasions. It ceased operating before the end of the forties. When it finished, I remember there was a short siding behind the Nissen huts on Station Hill and parked up against the buffers was the axle and wheels of a truck. Why it was left there I don’t know. The axle was about five inches in diameter and the wheels possibly three feet so it was quite a heavy piece of metal. It didn’t take us long to realise that if the axle was aligned correctly with the rails then motion was easy to set up. Jumping on the points operating mechanism facilitated access to the main line. We were off, our wheels accelerating to speeds of more than 2 mph. Corners were a bit tricky to negotiate as the wheels tended to prefer to continue in a straight line.

After an hour or so we arrived at the Atlas and there was ‘Puffing Billy’. Climbing into the cab we were presented with a selection of levers and wheels which gave us several moments of avid interest. At the front end of the cab was what looked like a starting handle for a car. This we discovered was easy to turn, which we did quite a bit. Our fun and games didn’t last long, as we were soon spotted by vigilant Atlas employees and we were presently confronted by a couple of burly workers who appeared at the cab doorway and proceeded to give us a sound ticking off. Clambering down we made a hasty retreat and soon had our set of wheels in motion for the return journey.

After several hours of exertion, fun and fear, we arrived back at the terminus and skilfully parked the wheels close to the buffers.

If you can add anything to the above history of Puffing Billy or have memories of your own that you would like to share please add a comment below.