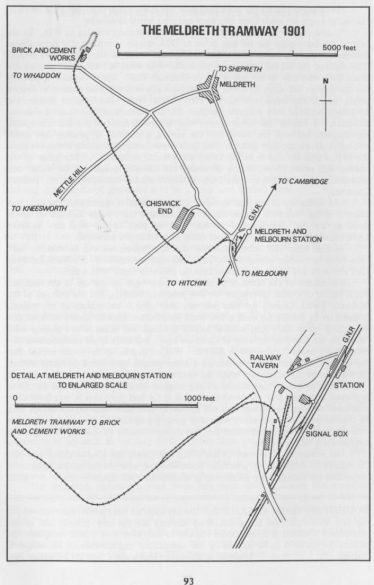 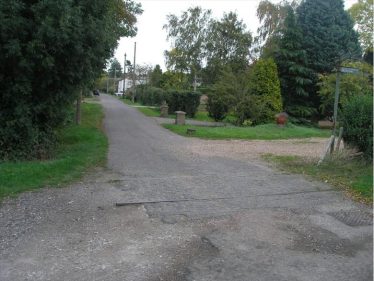 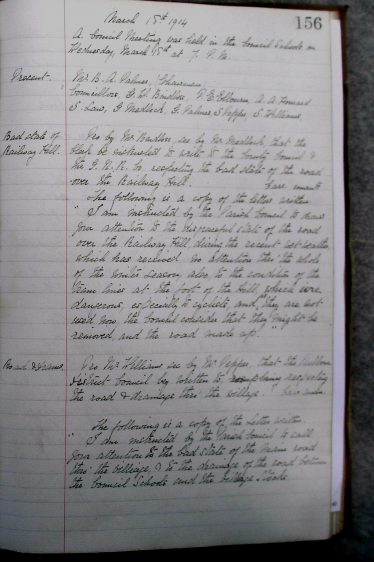 zoom
Page from the Meldreth Parish Council Minute Book for March 1914 minuting the poor state of the disused tramway with the recommendation for its removal. 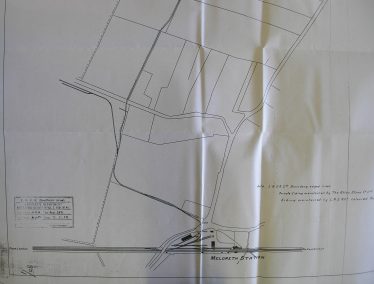 zoom
Drawing of the planning application by The Atlas Stone Company to build two new sidings beside Chiswick End made in 1929.
Chelmsford Record Office 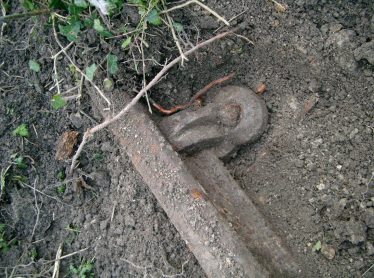 zoom
Small section of track and chair from the Meldreth Tramway located below the garden at 7 Whitecroft Road, Meldreth in 2003
Mike Dudley 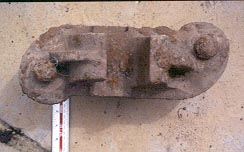 zoom
S shaped chair from the Meldreth Tramway excavated from the garden of 7, Whitecroft Road, Meldreth in 2003
Mike Dudley

If you walk to the top of Chiswick End you may be surprised to see a pair of railway tracks set into the road.  Perhaps you may have wondered what they are doing there?  Well, they are all that remains of a light railway track that ran for 1.5 miles (2.5km) between what is now Marley-Eternit on the Meldreth Road to Whaddon and the Railway Goods Yard at Meldreth Station.

Initially horses used to pull the trucks between the factory and the station but from 1928 petrol driven shunters dubbed ‘Puffing Billy’ were used.

Approval for the line was granted to Hubert O.S. Ellis and his partners John Williams and William Hawkins Tiltson in the Meldreth Portland Cement and Brick Co. Ltd., by Meldreth Vestry in March 1892 although it took another 9 years to secure the land and for the tramway to be completed.  Meldreth Portland Cement and Brick Co. Ltd was based on the site now occupied by Marley Eternit on the Meldreth Road into Whaddon.  Ellis employed an engineer by the name of Spargo to carry out a survey and the route identified crossed four roads, Meldreth Road, Kneesworth Road, Chiswick End and Station Road (see adjacent plan) with each crossing protected by manually operated gates.

The line was laid as standard 4’ 8½” although it was built with lighter materials than the main railway.  Although the tramway is linked directly to the main railway (see map), there was never any direct traffic passing from one to the other.  Materials destined to or from the works were transhipped in the Goods Yard for onward transportation.  Nothing is known as to how the tramway was operated at the beginning but it is possible that the trucks were initially just horse drawn between the brick and cement works and the goods yard until it was acquired by The Atlas Stone Company in 1928.  Certainly it was called a tramway at this time rather than a railway.  In addition, the inquest into the death of Harold Croxall (see below) stated that the trucks involved in the accident had been horse-drawn.

The Meldreth Portland Cement and Brick Co. Ltd. ceased business in 1908 and became the Meldreth Lime & Cement Works.  Then, in June 1911, just ten years into the tramway’s operation, the works, tramway and all its associated land and equipment were put up for sale by auction.  No details were provided of a locomotive although a timber framed shed with a galvanised roof along with a 100 foot long corrugated iron shed for the railway trucks was listed on the inventory.  There was also ~500 yards of track around the works and a Marshall 135HP horizontal steam engine was listed.  It is believed that the British Saxon Cement Company Ltd was the purchaser.

On September 16th 1913 there was a fatality on the tramway when a young boy by the name of Harold Croxall was killed in the vicinity of the Chiswick End crossing.  The inquest found that Harold had been trying to ride on one of the trucks, slipped and his legs were crushed under the wagon.  The horse had just been unhitched and the wagons were free-wheeling at the time, in transit from the station to the cement works.

It is not clear exactly what happened following this accident.  By 1914 it appears as though the tramway was no longer in use as minutes from the Meldreth Parish Council meeting on March 18th 1914 read:

‘the disgraceful state of the road over the Railway Hill during the recent wet weather which has received no attention through the whole winter season. Also, to the condition of the tram lines at the foot of the hill which are dangerous, especially to cyclists and as they are not used now, the Council should consider that they might be removed and the road made up’.

In early 1915 it was minuted by the Standard Cement Company Ltd., that it would be advisable to pull up the rails and dismantle the associated plant and machinery.  On the 21st September 1915, the fixed and loose plant was sold for £600 to a Messrs Boyd and Sons but the tramway itself was left intact.  The Standard Cement Company finally went into liquidation on July 18th 1922.

The Atlas Stone Co Ltd started at the Whaddon Road site in 1928 and the following year the line was put back into use using first a Simplex locomotive and then a Gaston Moyse locotracteur to haul the trucks between the factory and the Goods Yard (see page on Puffing Billy – coming soon).

In 1929 the Atlas Stone Company made an application to extend the tramway by building two sidings in a southerly direction parallel to and away from Chiswick End (see adjacent planning application drawing).  Apart from this application there is no other documentary evidence that these sidings were built.  Ken Winter remembers railway rails running parallel along Chiswick End and he also remembers two derelict lime kilns at their end suggesting the sidings were used to service the kilns.  However, neither Ken Winter nor Brian Pepper remember any points or junction with the main tramway line.  However, a letter to John King from Harry Parr (see related documents below), dated 5th November 2001, mentions Mr Wright’s (Atlas Stone Co Engineer) letter to Harry written back in 1967 where Mr Wright wrote: ” that the route of the line was as shown on your map, but there was an off-shoot from this line to the old works at Chiswick End”. Unfortunately we do not have any photographs or documentation regarding these kilns which were presumably operated by The Atlas.  Ken Winter also remembers some clunch (limestone) pits sited in this area which presumably provided the feedstock for the kilns.  These pits have now been filled in but were sited under what is now the redundant scrapyard previously belonging to the late Herbert Henry.  A study of Google Earth shows Chiswick End extending beside the old scrapyard and this would have been the location of limekilns and the limit of the railway sidings.

The tramway system was rendered obsolete in 1942 and the Moyse engine was sold soon after to H Dean of Ely.  The track was lifted by TW Ward of Sheffield ~1954 although a short stretch still remains set into the roadway at the top of Chiswick End, the only visible evidence remaining that a tram-way ever existed.

In 2003, the owner of 7, Whitecroft Road, the house immediately behind the Nissen huts on Station Road, was excavating his garden when he came across the tramway buried under ~1 foot of earth.  It would appear that this section was not lifted but simply buried under a thick layer of earth.  The sleepers had rotted but short sections of the track and several chairs were recovered.

I am indebted to John King of Upminster and Mike Dudley of Huntingdon for their contribution to the above information.

The following documents may be of interest if you want to delve deeper into the history of the tramway.