You are here: HomenextTopicsnextCommerce and EmploymentnextPublic Houses and Brewery in MeldrethnextAle House Tipplers, Unjust Measures and Refusing to Quit Licensed Premises 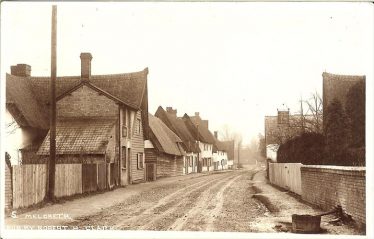 zoom
The Bell Public House shown on the right of this picture of Meldreth High Street, 1905
Robert H Clark postcards 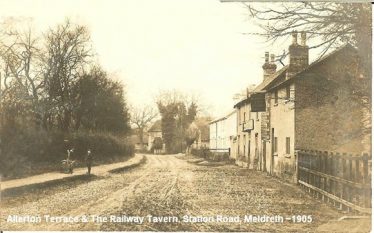 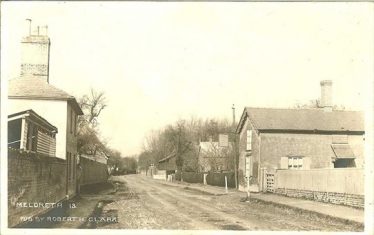 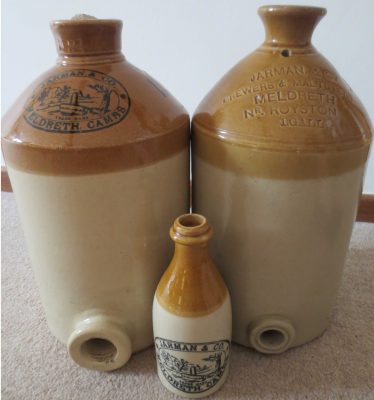 zoom
A bottle and jars from Jarman's Brewery in North End, Meldreth
Photograph by Kathryn Betts

The Alehouse Act of 1552 was passed to control the various abuses and disorders which went on in ‘common ale-houses’ and laid the foundation of modern licensing laws. It continued in force until the nineteenth century. The Act gave Justices of the Peace powers to stop the selling of ale and beer unless in premises licensed for the purpose. However, members of the clergy were also active in trying to control Sunday drinking where it coincided with the time of church services.

The Cambridge Independent Press reported that ‘James Wing of Meldreth was convicted on 10th October 1820 by Rev William Leworthy for suffering divers persons of the said and neighbouring parishes to tipple in his ale-house on Sunday 1st October, by which he forfeited 10 shillings to the poor and the benefit of keeping an ale-house for three years.’ The premises where the offence took place are not identified in the report but, from research done elsewhere on this website in connection with the Wing Family, we know that a James Wing took over the tenancy of the Old Bell Public House in 1764 for the sum of £38 and that this pub remained in the same family until 1837.

In later decades we find reports in the same newspaper of public house landlords being prosecuted for using ‘unjust measures’ when selling beer to their customers. John Wilson, of Meldreth, publican, was found to have used four such unjust measures by the Melbourn Magistrates at a hearing on Saturday 5th December 1868. He was fined 1 pound and 8 shillings, which he paid. John Wilson was the landlord of the Railway Tavern on Station Road which opened in 1858.

The newspaper report gives no details of how the measures may have been ‘unjust’. We know that throughout the 18th, 19th and early 20th century beer and ale (as well as some non-alcoholic drinks) were kept in stoneware bottles like the ones illustrated here. They were popular because they prevented the contents from deteriorating due to light exposure, though they were heavy and cumbersome to use. In other reported cases from the time landlords were fined because not all of the beer or ale which they sold was kept in containers which had a clear quantity marking on them and so failed to comply with the licensing regulations.

Prosecutions for using ‘unjust measures’ were common: on the same day the Magistrates convicted beer house keepers from Barrington, Bassingbourn, Melbourn and Orwell, all for similar offences.

However, it was not only the landlords who sometimes found themselves at odds with the law. We read, again in the Cambridge Independent Press, of a case at the Melbourn Petty Sessions on 20th December 1869 before JPs J E Fordham and W N Woodham involving two local men who had been drinking to excess: ‘Thomas Casbon and George Inskin, both of Meldreth, labourers, were charged with being drunk and refusing to quit the British Queen public house, at Meldreth when requested to do so by William Bell Jarman, the landlord, on 20th November. Casbon did not appear but was convicted in his absence and fined 19 shillings, including costs, or 14 days imprisonment in default. Inskin was fined 12 shillings, including costs, which he paid.’

Note: With thanks to Linda Clarke for her help in researching these cases