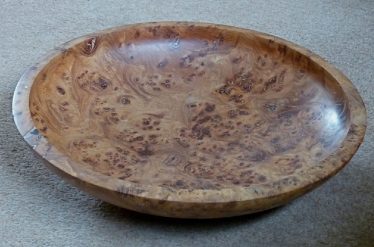 zoom
A bowl made by David Gratch
photograph by Peter Draper 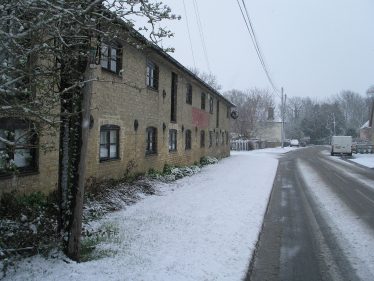 This article was first published in The Drifts magazine, February 1984.

I visited David Gratch at his home at The Maltings, North End, Meldreth and met a man not only dedicated to his craft of woodturning, but who also has a craftsman’s concern for making furniture which ‘belongs’ to the room in which it is to live.  He likes to visit the customer’s home and assess the environment.  For example, in making a coffee table for a married couple with young children, he would avoid an oblong or square shape with sharp corners which could be damaging to children, especially toddlers.   He would make a round table.  “If you sum up my style” he says “it is more the cottage style, though I try to be as original as I can within my ability”.  He also provides a wide range of woodware that would be practical to use in a house. “I will use wood with a finish that is not harmful – edible oil or pure beeswax” he says.  A natural, hygienically safe finish is applied to his platters, bowls, rolling pins, chopping boards, cheese boards, sugar bowls, spoons, mortars and pestles;  basically items that can be turned.

Home grown timber is used almost exclusively for a very simple reason.  He buys it in large quantities and in log form from mills where he has it cut to his own requirements and in his presence.

He dries his timber and can follow the history of each log almost from the beginning.  “I know the history of a particular log, what it can do, what it can’t do and what it should be used for and what it shouldn’t be used for.  One particular log of ash is not necessarily identical to another log of ash.  It depends on where it grew, on what type of soil.  And was it near to water and how fast did it grow?  The hardness and stability of the timber will vary according to its growing conditions”.  Thus he is able to judge, from this period of observation and conditioning to what purpose he should put a particular piece of timber.

The species he uses are generally ash, brown oak, sycamore, yew, a little normal oak, burr oak if it is obtainable, and wynch elm to a large extent.  “I also use some apple for particular purposes where I need very close grain timber like, for example, in rolling pins where I get the weight of the apple and the close grain effect.  It is a very dense wood and it also turns extremely well”.  Ash is one of his favoured woods both for aesthetic and practical reasons.  When considering turned platters or salad bowls, for example, it is most important that they wash well repeatedly.  Ash, in his experience, is ideal, unlike oak which goes black with washing or beech which if washed too frequently will split.  Another benefit is the resilience ash has to sharp cutting edges, so chopping boards or platters do not show cutting marks like teak or other darker woods do.  Another timber that is tolerant of washing is wych elm.  The ancients recognised this and used elm wood as pipes for water systems.

David Gratch has a marked preference for timbers that reveal the quirks of nature.  He does not like using the timber that industry is looking for – which is usually free of knots and twists and with long, even grain.

David Gratch is also unique in being the largest producer of paviers’ mallets in the country – “beautiful, wooden giants lying slumbering in the corners of a shed …… quite a sight!