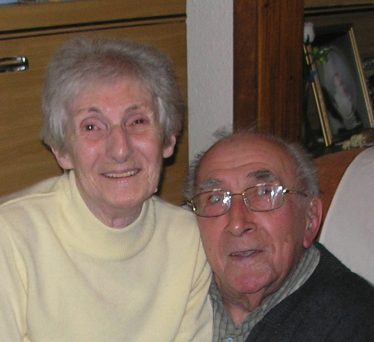 Eric Walbey talking about his school days (2min 51sec)
A transcription of this audio clip can be seen at the bottom of the page.

Keith Jacklin also remembers going to Meldreth School in the early 1920 (1min 28sec)
A transcription of this audio clip can be seen at the bottom of the page.

Eric was interviewed by Joan Gane and Terry Dash from Meldreth Local History Group, on 4th January 2008 and spoke about his school days.  Click on the “play” button above to hear Eric talking about his time at school.

I can remember my first school teacher, Miss Gertie Wedd from Bassingbourn and then there was a Miss Katie Neaves from Barrington; they used to cycle to Meldreth and we had a gardening instructor from Bassingbourn, Mr Kefford because we all used to have a little plot at school, our own little plot and we used to grow veggies on it.

We used to bike to Melbourn school for woodwork lessons on Monday mornings.  Mr Wilf Ogden was the teacher and I remember the first week I went he gave me a piece of wood and he put a gauge mark on it and you had to plane it down to this mark.  Well I planed mine and I planed the gauge right off!  “Go in and get another piece” he said and as I went out the door he threw it at me and the children went “Ooh” – so a friendly sort of place!  The first thing I made was a little footstool and I made a pen stand and lots of things like that.

We used to take a packed lunch to school which was mostly bread and cheese, or meat perhaps after the weekend.  I remember one day, it was bitter cold and my mother walked from over the hill in the pouring rain with a bag of baked potatoes from the oven, full of butter and that so that we had something hot that morning.  We used to have a third of a pint of milk that was delivered to school and once we had Horlicks for quite a while for our mid-morning drink.

Click on the play button on the audio bar at the top of the page to hear Keith talking about his school days.

My earliest memories of childhood was attending school at the age of five (1922).  We had to walk there and back in the morning and again at lunchtime, except Mondays which was wash day.  We were allowed to take sandwiches often made with sliced sausages, not a favourite.  The head teacher was Miss Grace Butler and infant and class 1 Miss Wedd from Bassingbourn and the middle room teacher was Miss Pearce.  School Managers Miss Chamberlain and Mr Herbert Hale and we were taught to touch our caps to them when meeting them in the street.  The boys in Miss Butler’s room had to take turns going in the school house to pump water up into the storage tank in the loft which supplied all the school needs.  This had to be done every day.

We had gardening lessons every Monday, each having a plot to grow vegetables in the correct way; straight lines, no weeds.  At the age of eleven we had half day lessons in woodwork in the old chapel next to Melbourn Primary School.  The girls went there on different days for cookery lessons.

I remember being told at school that the population of Meldreth was 660 then.