If you have memories of the school from the 1960s, please add a comment at the bottom of this page.  Thank you.

The punishment that we used to get in the infant class was to stand at the back of the classroom facing the wall.  In Mrs Rathbone’s Class you would get a swift smack to the back of the legs or would be given lines.  In the top class, Mr Harding had a brown plimsoll or a cane that he called Nicholas.  These again would be applied to the back of the legs repeatedly with force for any misdemeanour in class, an example of which was, I remember, repeatedly putting a “c” in “alike” to make “alicke”.

We used to have assemblies as I remember singing hymns from blue hymn books, such as:

In the playground and field we used to play Cowboys and Indians, British Bulldog and Zulus and Soldiers.

We had desks which we could keep our books and a lot of rubbish in.  I remember using pens that were made of bits of wood with metal nibs attached that we would dip into ink pots.  We also used pencils that we used to sharpen in a mechanical sharpener that was fixed to the teacher’s desk.  I also remember big chunky wax crayons which were in later years superseded by thinner ones with paper around them.

[We had] a different and more practical approach to education.  For example, a somewhat bewildered bank manager, phoned by a child to be asked, “How many £1 notes are there in a stack 1” high?”  Opening tins of peas and weighing them to find the water content and hence the real value.  Comparing values of boxes of matches.  And in those days, too, the best value of brands of cigarettes.  The first school calculating machines, where you turned a handle at the side and worked levers at the bottom.  Methods of winning the pools (without success!).  Binary number systems and magic squares.  The school maths evening which filled the hall and where, for example, we weighed a piece of beef before and after cooking to find the weight loss (I remember the loss was 20%.  The reaction time machine simulating a motor car where, incidentally, some of the children’s results were better than their parents’.

[I] recall the massive old coke fire which heated the tanks of water fixed to the back wall.  It was quite inexplicable to me when, at about 11 o’clock, there came a rumbling sound and six children at the back of the classroom picked up their books and came and sat on the floor at the front and carried on with their work!  Upon raising the eyebrow I was informed, “Sometimes it gets a bit hot at the back, sir.”

I saw what she meant when a gallon or two of hot water overflowed from the tanks onto the desks at the back.  But they were clever those kids—they knew when it was to happen!

What a good time the boys had (I am sure it was the boys) playing on the new building site and moving the foundation marker pegs so that some very elaborate trenches would have been dug the next day.  The school very nearly became a very peculiar shape.  Quite fun, too, were the mud fights between the boys and the bricklayers.  A sea of mud and the odd infant was fished out of the waterlogged manholes and trenches. 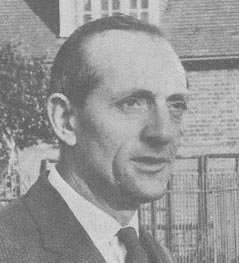