I can remember being ill at home and … an accordion arriving from school. I don’t know who arranged it for me.  It was very pretty, a pale grey mother of pearl/marble effect. I think it belonged to Mr Harding’s daughter. My father, who had had an accordion band years before, showed me the keys and buttons and how they worked and I was off! Of course the band wasn’t even an idea then and no-one else at the school played. I must have gone back to school with my new skill, and the band followed.

The music of the 1960’s was rocking and twisting and doing the Hippy Hippy Shake. However, this was difficult to play on an accordion, so our tunes were a medley of Daisy, Daisy and I’m Forever Blowing Bubbles, The Isle of Capri, a song called The Village Band, and Cruising Down the River on a Sunday Afternoon plus any other sing-alongs that we could learn.

When I left the Primary School in 1967 the Rhythm Rascals continued without me – happy memories!
– Julie Handscombe, pupil at the school from 1960 to 1967

The headteacher Mr Harding, who could not read music, developed a novel system of teaching the accordion using alphabetical note names. The band played at lots of events in and around Cambridge and became so popular that Mr Harding had to refuse some requests for its appearance.

Perhaps the accordionists will remember an excellent performance at Orwell Village Hall, playing for someone’s birthday. The children had arrived before me and some bright spark had given them a glass of champagne before they went on stage! Never did they play better!
– Ron Harding, headteacher from 1964 to 1981

The following report appeared in the Royston Crow on 19th December 1965:

Never before have children of Meldreth Primary School acquitted themselves so admirably as they did in the concert they gave to parents and friends on Wednesday evening. Many hours of patient teaching by the headmaster, Mr R J Harding and the assistant mistress, Mrs Thompson, must have been needed to get the children to such perfection, each of whom gained well merited applause.

The “Village Band” of performers were particularly talented with their musical instruments which included Julie Handscombe with her piano accordion.

The whole programme was as follows – choir singing by all children “Westering Home”, “When You Wish Upon a Star”, “Lavender Blue”, “Bless This House” and “Waltzing Matilda”, The Village Band in a medley “Eton Boating Song”, “The Band” and the “Skye Boat Song”. Then came the infants’ song and their items of verse.

This was followed by the recorders in six lullabies. Then the children sang “I See the Boy That Builds the Boat”. Recorders and melodicas then played, “World of Our Own” and “Some Enchanted Evening”. Other items by the band were “Scotland the Brave”, “Robin Hood”, “William Tell”, “Matilda”, “Clementine”. For the final items the children sang “The 12 Days of Christmas”, “When the Saints” and for the finale, “The Infants’ Christmas Wishes”. Altogether a really first class entertainment.

On Monday the dress rehearsal was performed before an invited audience of Meldreth Over 60s Club and Barrington and Melbourn Primary Schools. Miss Bowden expressed Meldreth’s thanks and a Barrington child said thank you for his school.

According to a newspaper report of this concert, “the small accordionists were most gifted and lent much to the enjoyment, as did the Recorders and Melodicas. The dancing troupe in “The Lady of Spain” song played by the accordionists was the most colourful part of the concert. The troupe really put their whole heart into the dance.”

As reported by the Royston Crow newspaper, “many feet were tapping as the famous Meldreth children’s accordion band swung into musical numbers like “Robin Hood” and “Elizabethan Serenade”.  The accordion band had about twelve children in its top group and these are mostly ten year olds.  Among the many songs played by the children were several by soloists and duettists. Among those worthy of notice were Susan Bowden, Elaine Handscombe, Richard Harding, Valerie and Pat Chinery, Susan Haywood, Janet Bidnell and Valerie Cocks.”

The Rhythm Rascals – Valerie Cocks, Elaine Handscombe, Julie Emery, Alison Chalkley, Richard Harding, Kevin Thomas, Susan Bowden, Karen Rogers, Susan Haywood, Pat Chinery and Janet Bidnell – performed to an audience of 700 at the Guildhall in Cambridge at an event which included a personal appearance by Percy Edwards.  The poster for this concert is shown below. 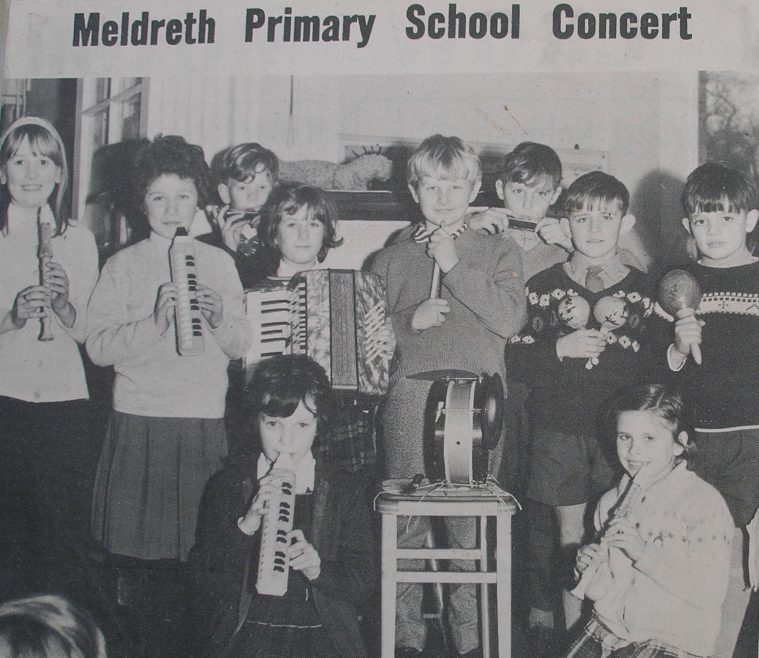