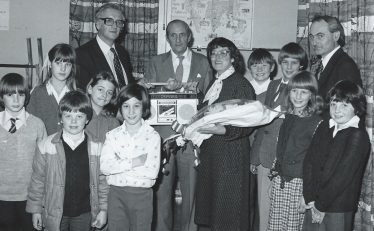 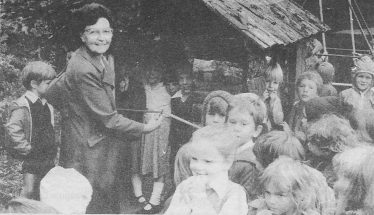 Ron Harding retired in December 1981 after almost 30 years as headteacher.

Writing in 2000, Mr Harding spoke of his arrival at Meldreth, “a delightful village school of 80 children and an antiquated building with the promise of a new one” and of “the 80 children who had never before had a male teacher”.  He recollected that  the school telephone was on a window sill in the classroom and the headteacher’s study was the store cupboard (6’ x 4’ ) in the same room.

In his time at the school, however, Mr Harding oversaw many improvements including the building of an extension and the installation of the swimming pool in which hundreds of children have learned to swim.

Joyce Thompson retired after teaching the infants class at Meldreth Primary School for 26 years.  As a leaving present Mrs Thompson gave the children a wooden log cabin for their play area.