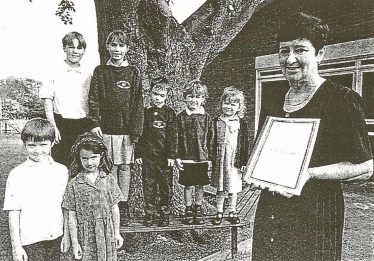 The following report by Warwick Mansell appeared in the Cambridge Evening News on 18th May 1998:

Meldreth Primary School is a school with many good features, the inspectors say. Pupils tend to do well academically at the school, thanks to its caring ethos and good teaching by the highly-committed staff. The school could do better in the planning of its curriculum.


The Ofsted team visited the165-pupil school in the High Street, Meldreth, in March. They found that pupils entering the reeption class make good progress before entering the school proper at age five. By the age of seven, the children’s achievements are above average in all three core subjects: English, maths and science. This progress is maintained through to the time the pupils leave the school at age 11. In design and technology, geography, history, music, art and physical education, the children’s achievements are above national expectations at both age 7 and 11. The exception is information technology, where the children perform to national expectations throughout their time at the school. The inspectors describe the school’s information technology equipment as “limited and ageing”. Pupils with special educational needs – there were 27 of them at the time of the inspection – make very good progress towards the targets they are set throughout their time at the school.


The inspectors were mpressed with the attitudes of the children. The pupils show great interest in what they are asked to do and apply themselves conscientiously to their work. They also highlight the “consistently good teaching”, which is described as a strength of the school.  In two fifths of lessons, teaching is good, and in a further quarter, very good.  Fewer than one lesson is 16 is described as unsatisfactory. Though the inspectors say the work assigned to less-able pupils tends to match their needs, sometimes that set for the brighter pupils is too easy. In the 7 – 11 age group, the inspectors highlight some weaknesses in the curriculum planning, stressing that joint planning is lacking in classes where there are two year groups.  Though the school’s systems for assessing pupils’ work are “extensive”, the inspectors say that not all the information collected is useful, and too little use of it is made in planning the next steps in learning and setting targets for the improvement of the whole school. The inspectors also criticise the school development plan, which is described as wide-ranging but lacking in both detail and strategic direction.

Headteacher Dorothy Brown is described as an effective professional who provides broad educational direction for the school, supported by an effective governing body.  The school’s finances are well managed, and its resources for learning are described as satisfactory.

The inspectors sum up by saying that given the good progress children make at the school, its positive ethos, the very good provision for children with special educational needs and the effective financial management, the school gives good value for money.

Mrs Brown said: “We are delighted with the report, which recognises the outstanding work of teachers, support staff, governors and parents.”