My Memories of Meldreth School 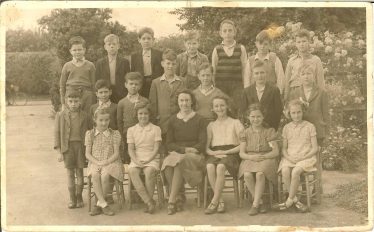 zoom
Class 2 of Meldreth School, pictured in 1946. Ken Winter is second from the right in the back row. Miss Broughton is in the front row.
Photograph courtesy of Ken Winter

In the 1940’s the school had two classes, the infant class with Miss Pearce (Granny Grunts) and the junior class with, in my time, Miss Broughton.

In the infants class we had to sit up straight, blow our noses every morning and keep very quiet. Also we were given a spoon full of codliver oil and malt, all of us using the same spoon, one after the other.

During the war we were all issued with gas masks which we were supposed to carry with us, but we soon got fed up with that and either left them at home or at school.  We also had an air-raid shelter outside by the vegetable gardens. We used it for practice runs but I don’t think we bothered when the siren went!  The siren always seemed to go when we were walking home from school.

The junior class was at times unruly and a handful for the teacher. I remember myself and others being punished by the ruler across the knuckles, which does hurt!  The next day we collected all the rulers in the school and pushed them down a drain pipe.  Miss Broughton, with the aid of Miss Pearce, eventually persuaded someone to own up and say where the rulers were hidden.  They had to get a man in to take the drain pipe down to get them out.

At the end of the week Miss Broughton would award a sweet to those who had been good.  Well, the ‘big’ boys saw this as an affront and made sure that they didn’t get one.  I sometimes found it difficult to be bad enough not to get a sweet.  One week, on getting 100% for arithmetic, I got a sweet!!  I had to put up with the chant “teacher’s pet”, etc for the next week.  I made sure that I didn’t get 100% again.

For the 11+ four of us had special tuition.  We would stand by Miss Broughton’s desk while she went through various subjects.  I always stood facing the large windows so that I could now and again catch a glimpse of the swifts as they screamed past.  (They nested in the thatched cottages in the High Street.)  I remember getting upset with David May because he would ask questions and we would be standing, bored stiff around the desk, legs aching for ages.

For the 11+ exam we had to cycle to Melbourn school.  I remember that it was raining and we had to sit the exam soaking wet.  None of us passed!!  In fact I think I’m right in saying that no-one passed the exam for the next seven years, until 1954 when my brother Ron passed.