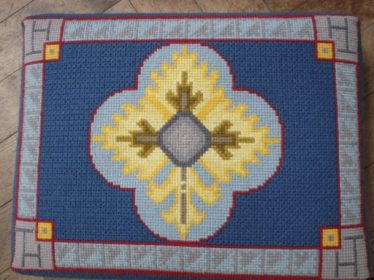 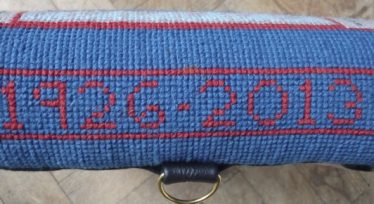 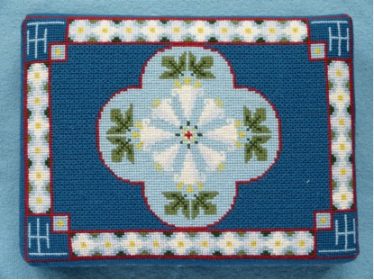 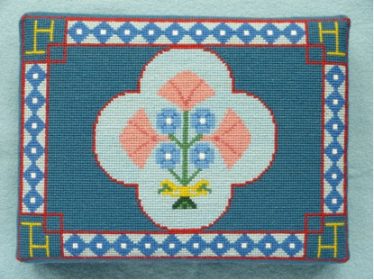 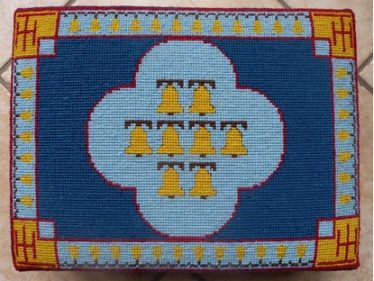 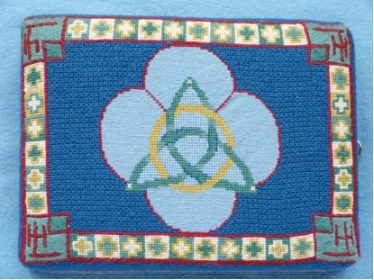 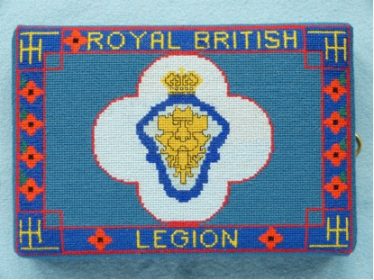 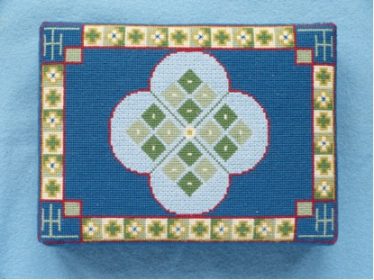 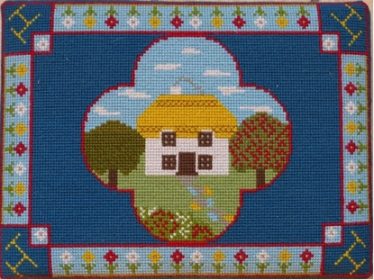 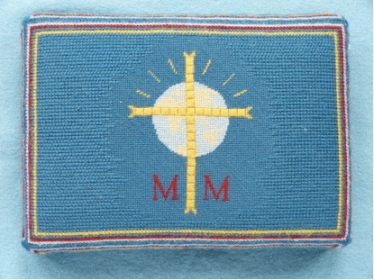 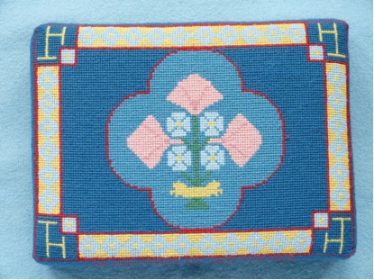 zoom
Jane Cameron, Foxton 2012
This is a basic design executed in cross stitch 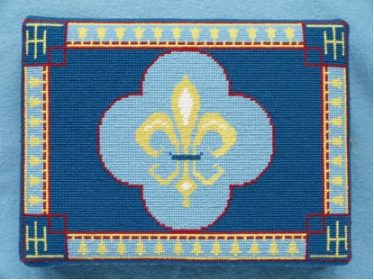 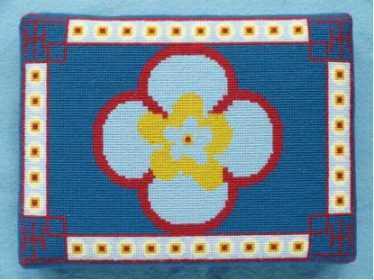 zoom
Janet Pilkington Meldreth 2012 - I took the pattern of my kneeler from the stone decoration around the font.
Cross stitch 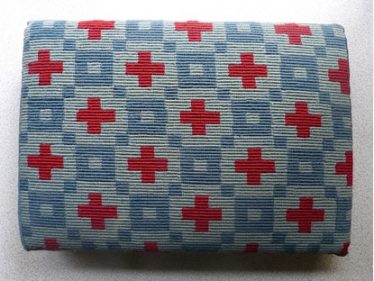 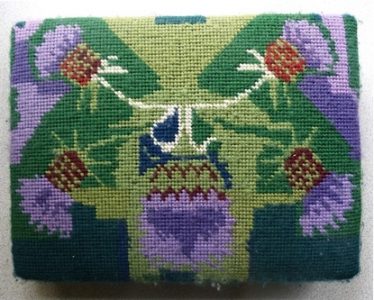 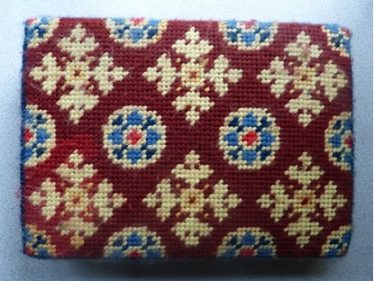 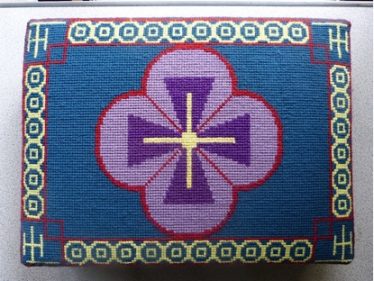 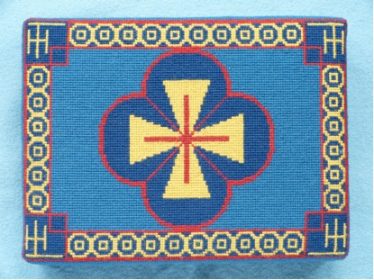 Our new project started in 2011, with Lizanne van Essen helping us with designs taken from artefacts in the church and the churchyard. She and Julie Draper with a number of others went to visit several churches to look at their designs, colours and stitches. We were impressed by the kneelers in Saffron Walden church; the main background colour was matched with the colour of the carpet and individual designs featuring a large number of  individual interests, such as music, were contained within a quatrefoil, outlined in the same colour throughout.

We decided to follow their design plan taking the background colour from the carpet (the same colour used in the millennium kneelers), with red defining the quatrefoil and edges of the kneeler and pale blue for the outside of the individual designs in the quatrefoils. In each corner in the same red are the initials HT (for Holy Trinity).  Stitchers were encouraged to “sign” their kneelers and if they wished, to add a dedication around the sides of the kneeler.

The canvas used is Penelope Antique ten holes to the inch 25 x 20 inches with Appleton’s crewel wool, two threads to the inch. The red outline stitch is no 504, and the main background stitch is blue, no 566.

We have had enormous help and encouragement from Mrs Sanderson of Colorcraft in Saffron Walden who is a mine of information on tapestry and stitching in general.

All are welcome! None of us are experts but we are learning all the time.

Some of our stitchers are featured below and some of the kneelers are shown on the right.

After I finished my first kneeler, I looked around Holy Trinity for inspiration for a pattern for another.

I took a photograph of the stained-glass window near the font and chose the pattern from that. The colours and design of the central pattern on the kneeler came from the robe worn by the figure in the window. The kneeler’s border was taken from the edge of the robe. I changed the colours to a more subtle grey and pale blue. Lizanne van Essen designed the chart for me.

I showed my father the design and he showed great interest in it and liked the pattern. He was unwell at the time and when he died at the beginning of 2013, I decided to stitch the kneeler in his memory, as shown by the wording on the edges.

Lilies appear in the stained glass and often in flower arrangements around the church, symbolising purity. Ivy and stylised leaves are also in many places and in Victorian times symbolised friendship in the group of kneeler sewers. I particularly enjoyed sewing the lilies as many years ago I had sewn other lilies in another kneeler for Bury St Edmund’s Cathedral.

My kneeler is done entirely in cross stitch as I am no needlewoman. The design is taken from a gravestone in the churchyard. Part of the dedication is to my late husband, Ian McLeod Young, who died in November 1996 and is interred in the remembrance garden in the churchyard. Although at that time we did not live in the village, we used to come regularly to the 8 am services and I subsequently moved to the village in 2000. The second part of the dedication is to our granddaughter, Clara Young, who was born and died in 2006.

My design with bells celebrates my husband John’s long service as captain of the bells in Meldreth Church. He trained generations of bell ringers and completed 3000 peals rung all over the country.

The dedication is to my parents, Mark and Audrey Pearson and uses the phrase “remembered with love” round the edge, because it is engraved on their headstone in the graveyard at Wotton Rivers church in Wiltshire. Mark, who suffered badly from Parkinson’s disease, came to live with me, Peter and our children, Chloe, Susie and Tim for three years after Audrey died, eventually slipping away at the Dumb Flea in Chiswick End. Willers firm from Harston, who had added on a small extension to the cottage for him, were the funeral directors. He was a regular communicant at Holy Trinity and he is remembered by an inscription on the chalice used in the Eucharist services.

I have dedicated this kneeler to The Royal British Legion on its 90th Anniversary (1921 to 2011).  Since moving to Melbourn several years ago, I have been associated The Melbourn and Meldreth Branch, which was itself founded 75 years ago.   The central emblem represents the Badge of the Royal British Legion, with the poppies being the familiar symbol of remembrance.

The centre design is very loosely based on the ivy growing in the churchyard. The crosses stitched in different colours in the borders were designed to add interest and were fun to do after the rather long and tedious process of filling in the blue background surrounding the centrepiece.

The kneeler is dedicated to the memory of Ada Caswell, my paternal grandmother who was a stalwart member of her church in Uxbridge Middlesex.