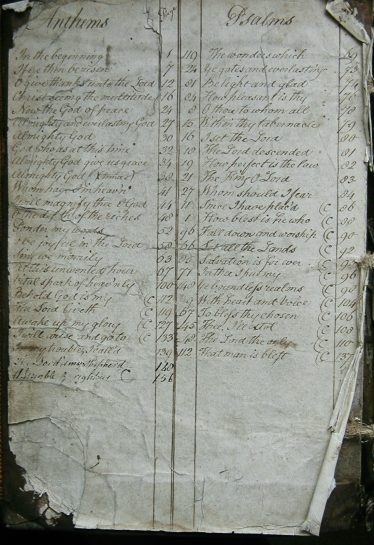 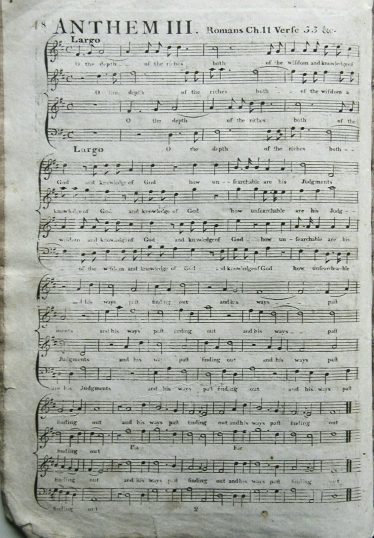 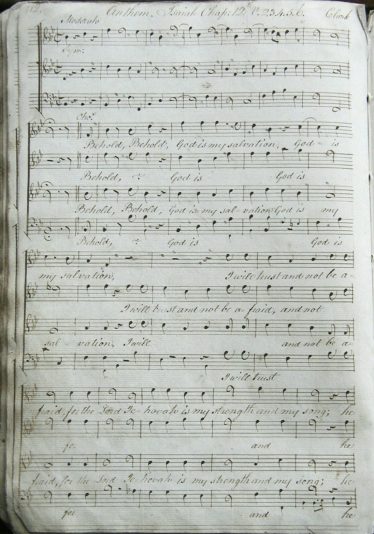 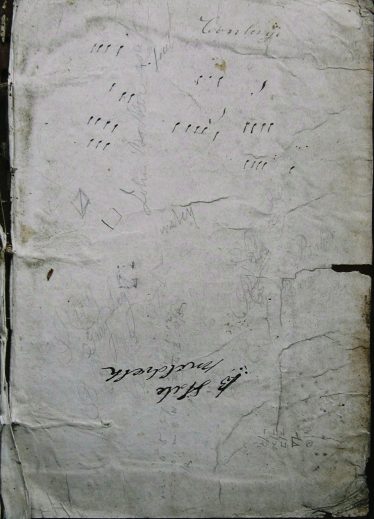 zoom
The inside back cover of the Meldreth Psalm Book showing the name B Hale, Meldreth and other various names and doodles
Linda Collins 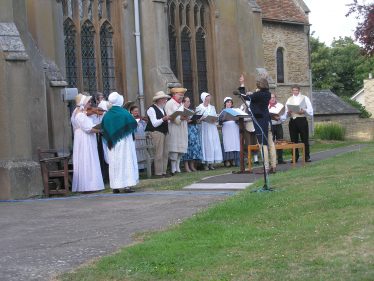 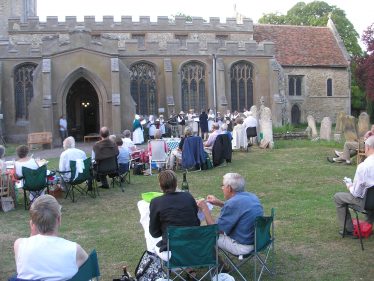 In 1994, Linda Collins, a member of the Chiltern West Gallery Quire, came across an old, leather bound book of music at an antiques fair in Biggleswade. It was fortunate that it was she who found it as anyone else may well have passed it over. Linda recognised it as a book of church music, some printed and some in manuscript form, which originated from the early nineteenth century. However, more importantly for us, it had originated in our village of Meldreth, as written in ink on the inside of the back cover was ‘B Hale, Meldreth’. Linda paid £15 for the book and a description of its appearance and condition can be found at the bottom of this page.

On April 6th 2000, The Chiltern West Gallery Quire performed a selection of psalms and anthems from the book for Royston Local History Society. Then, on July 4th 2009, the Quire visited Meldreth and on a beautiful, warm, summer evening they performed further renditions from the book in the churchyard of the Holy Trinity Church, much to the delight of a large gathering from the village. You can hear some of the pieces performed in the churchyard by clicking on the ‘play’ button on the adjacent audio recordings.

The printed pages consist of two collections of anthems by Benjamin Cuzens from the late C18th, ‘Divine Harmony’, originally published in 1787 and ‘Five Anthems and Five Collects’ from 1789. One bears the words ‘Calculated for Country Quires’ on the title page. The manuscript pages contain psalms and anthems in the West gallery style which from other sources can be dated to the period 1750 to 1815. Three of the composers identified in the book were published nationally – Thomas Clark of Canterbury, William Knapp of Wareham, Dorset and Benjamin Cuzens of Portsmouth, while other lesser known composers came from the East Midlands.

The manuscript pages are watermarked with the dates 1799 and 1815 and the marks of the papermakers Edmeads and Pine and C Ansell. Clearly at sometime after 1815 all the pages were brought together and bound.

Sadly there are a number of pages missing from the Meldreth Psalm Book but fortunately there is a contents page and it has been possible for the Chiltern West Gallery Quire to recover the lost pieces from printed collections in the British Library.

Besides B Hale, there are other names written on the end papers such as:  Ann Stonecleft, Thomas Yules, John Whyte, Conlinge, Gray Leg and the phrase ‘John Baker is a Fool’. More about this can be read below.

The History of West Gallery Quires

In the mid eighteenth century Quires were drawn up from the local population with the aim of improving the standard of the congregational singing of simple psalm tunes in country churches. As time went on the enthusiasm of these Quires drew them on to sing more elaborate pieces in which the congregation could not join. These pieces were collected and preserved in manuscript and printed collections compiled by the singers themselves. It has been rediscovered and revived in recent times and has become known as ‘West Gallery Music’. This name reflects the widespread eighteenth century practice of seating the Quire in a gallery at the west end of the church where the sound projects more effectively into the church than choir stalls in the chancel. Both Meldreth and Melbourn churches had galleries.

As few country churches had organs at that time, West Gallery Quires originally sang unaccompanied. However, as the century progressed wind and stringed instruments were added to the Quire until by the end of the century the Quire was accompanied by a full band in some churches. The style of music also evolved, away from the austere psalms and anthems and towards a more florid style. Typically the musicians were the craftsmen and tradesmen of the village and besides playing in church on a Sunday they would also play for dances on a Saturday night. Some of the Quire manuscript books have church music at one end and dance and even military music at the other. As time went on the line between church and dance music became blurred with the musicians believing themselves to have a special status in the village seated as they were in their exclusive position in the gallery.

In the early nineteenth century the Church of England underwent major changes. Dilapidated church buildings were renovated or rebuilt and new efforts were made to bring a focus onto the congregation and away from the performances of the West Gallery Quires. With the change from the Edwardian period to the Victorian, a new breed of clergy railed against the country Quires and the ‘conceit’ of their musicians. As the century progressed galleries were taken down and replaced with choir stalls. Quires were disbanded and replaced with surpliced choirs and an organ. Meldreth’s gallery was removed during the church restoration of 1846 and a barrel organ was installed in 1866, having been brought from Bassingbourn where it was not considered loud enough. B Hale’s book of church music was discarded but luckily for us resurfaced at the antique fair in Biggleswade where it was spotted by a sharp-eyed Quire revivalist.  It is now known as ‘The Meldreth Manuscript’ in West Gallery circles.

A more detailed history of West Gallery Quires, along with an overview of life in Meldreth at the start of the nineteenth century can be found in the document at the bottom of this page.

Who were B Hale, Ann Stonecleft and A Baker?

B Hale was most probably Benjamin Hale who was born in Meldreth in 1814. Benjamin began work circa 1837 as a wheelwright and was a Parish Clerk in Meldreth, a position held by the Hale family for a total of 135 years. Since Benjamin was born around the same date as the watermark in the later pages he would most likely have acquired the book sometime after it was compiled.

The Baker family were resident in Melbourn and Meldreth for several generations, earning their living as tailors and labourers. In 1846, when the Melbourn Music Society was formed, the Bakers were well represented amongst the founder members. Why someone considered that ‘John Baker was a fool’ is not known!

We have been unable to find any evidence of a Stonecleft family in the vicinity, the nearest being in Whittlesea. Likewise Yules, the closest of which are in March. There was, however, a Jonathon Whyatt who died in Shepreth in 1825 who may have been the John Whyte in the book. We have been unable to trace anyone with the name Conlinge, nor anyone with the possible nickname of ‘Gray Leg’.

We are indebted to the Chiltern West Gallery Quire and to Tom Doig, local historian and Vice-President of Cambridge Antiquarian Society for much of the above information. Our thanks also go to Linda Collins, who rescued the Meldreth Psalm Book and kindly loaned us the book and provided us with a digital copy.