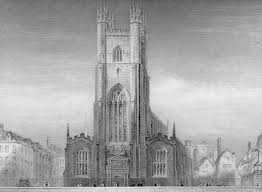 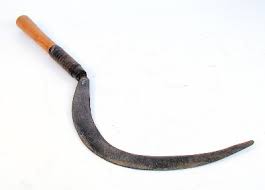 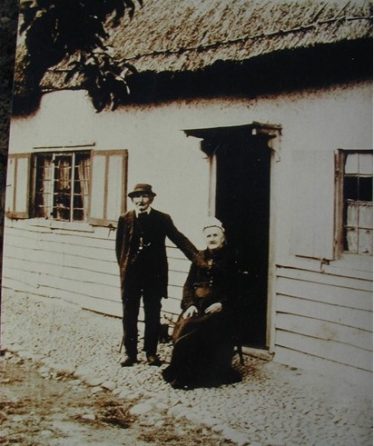 zoom
The last landlord of the Bell Inn, Samuel Woods, with his wife, Rebecca, pictured outside the Meldreth pub in 1900.
Photo supplied by Avril MacArthur 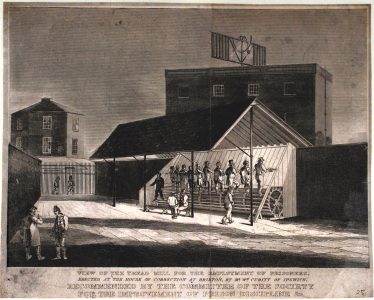 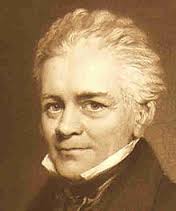 The Cambridge Chronicle and Journal of 25th March 1843 carried a detailed account of the proceedings of that year’s Cambridgeshire Lent Assizes. Having the previous day attended Great St Mary’s Church, together with the High Sheriff and a fellow Judge, to hear ‘a most impressive sermon’ preached by the Rev. J Cooper, Fellow of Trinity College, Mr Justice Coleridge presided in the Crown Court.

In his opening remarks, addressed to the members of the Grand Jury, (“so highly respectable and intelligent a body of gentlemen”), he expressed his concern about a class of crimes which, in his view, had become all too prevalent: “I am sorry to see how much the very serious offence of stabbing and cutting is growing on us in this country…In some counties it is the commonest thing in the world, when there has been a fight, for the person who has the worst of it to take out his knife and use it against his adversary. Nothing can be more contrary to the national character of this country and there is no offence which it is more necessary to put down.”

One of the cases before the Assizes concerned ‘George Wilson, aged 27, of Meldreth, labourer, (who) was charged with having on 13th August, assaulted and wounded Thomas Thurley with a reaping hook. The prisoner, who was undefended, pleaded not guilty’.

Note: Reap hooks were heavier and had a smooth blade rather than the serrated cutting edge of a sickle. They were used with more of a slashing action compared to the gentler sawing strokes that were required with a sickle. The later nineteenth century saw the steady mechanisation of harvesting operations in England, but instances could still be found of the hook being used to cut corn. Subsequently, hooks remained as more of a general purpose tool for use around the farm and smallholding (from Museum of Rural English Life, University of Reading: www.wap.rdg.ac.uk).

‘Samuel Carter was at the Bell Inn at Meldreth in August last, about half-past ten or eleven at night. The prisoner was there; his father and a person named Thomas Thurley were also there, not in the same room. (Samuel Carter) heard the prisoner say “I can’t help what my father does, nor you yours.” They then went out …and quarrelled; the prisoner called Thurley a rogue, also his father and said he could transport both. Thurley said “if you call me words like that I’ll hit you.” Wilson again called him a “bloody rogue” and Thurley was going to hit him with his fist when Wilson struck him from behind with a reaping hook. After Wilson struck him Thurley ran a little way then called out “murder!” The witness said that he was bleeding very much but Wilson got the hook and was going to hit Thurley again on the head. He said “you b….. you, I’ll cut your head open.” The witness then took the hook away from him; he does not know if the prisoner was drunk but heard the landlady say he had one pint of beer and she would not let him have any more. The prisoner said he did not know how much beer he had had.

Thomas Thurley, the prosecutor, said that he was in the same room as the prisoner and his father and the prisoner used offensive language towards him and his father; they had not been drinking together any length of time. They had a few words together and when they got outside the prisoner called him a nasty name and he said that if he called me that again I’d hit him; he thought that if the witness Carter had not been present, Wilson would have murdered him. Mr Westcott, the doctor, was sent for and the wound sewn up. It was about harvest time; he had known the prisoner before – they had been neighbours together.

Mr Westcott, surgeon at Melbourn, was called to attend Thurley in August last. He rode to Meldreth and got there between 12 and 1 o’clock. Thurley was lying on the floor, bleeding very much; the wound was very deep (two inches) and might have been made by the hook. It was a serious wound and there was danger from loss of blood.’

‘At the request of the learned Judge, the prisoner called his father, John Wilson, who saw Thurley strike his son. He pulled Thurley off but he again knocked his son down; his son said “I can’t stand against you (Thurley) and if you come that again I’ll hit you with the hook.” It was alleged that Thurley knocked Wilson down three times and then Carter (the previous witness who disarmed the assailant) ran out more like a young lion than a man.’

The jury returned a verdict of guilty and the prisoner was sentenced to 18 months imprisonment and hard labour. Though not an especially long sentence by the standards of the day, the inclusion of hard labour added a further dimension to the penalty.

In 1822 the Society for the Improvement of Prison Discipline published a drawing (shown above) of prisoners operating a treadmill at the recently opened Surrey House of Correction in the village of Brixton, as it then was. It was, in effect, a kind of elongated wheel on which prisoners continually trod the revolving boards. Hard labour emerged in the early decades of the nineteenth century as a form of punishment replacing such public manifestations of justice as the stocks and pillory. There was much popular concern at the time about reports of prisoners passing their days in idleness, with drunkeness and gambling rife. The main early form of hard labour was picking oakum – pulling apart old, tarry strands of rope – but this activity was difficult to exercise discipline over and it was criticised for doing little to deter.

The treadmill was the invention of Sir William Cubitt, (photo above) a Norfolk-born engineer, who had been disturbed to see prisoners in Bury St Edmonds gaol spending their sentences unproductively. The Brixton version could employ up to 100 men, women and children at any one time. Treadmills could be connected, as at Brixton, to millstones which ground flour used to make bread for the prison and other local ones. So popular was the innovation with magistrates that within two decades more than half the 200 prisons in the country had one. They remained in operation until 1902 when they were discontinued in favour of more liberal penal methods.

It is very likely that George Wilson’s hard labour will have involved operating a treadmill such as the ones described here.