You are here: HomenextTopicsnextLaw and OrdernextMeldreth Spirit Merchant appears before Bankruptcy Court, 1846 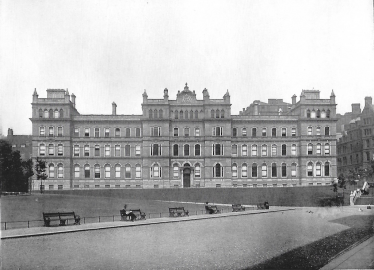 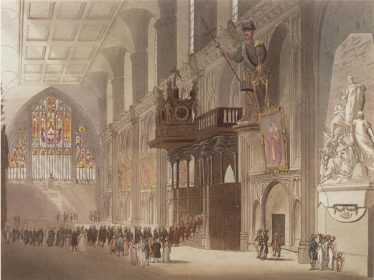 zoom
Great Hall of the Guildhall, London, where bankruptcy cases were held before the court moved to Basinghall Street
london lives.org 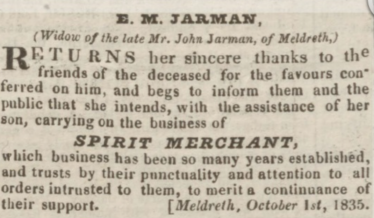 zoom
Advertisement for the sale of the Jarman business and other possessions, 1845
Cambridge Chronicle, 8th March 1845

But there is an earlier reference to a John Jarman who worked as a spirit merchant from the 1840s. Ultimately, this was an unsuccessful venture because we can read among the public notices in the Cambridge Chronicle and Journal of 2nd May, 1846 the following:

‘WHEREAS, a Petition of John Jarman, of Meldreth, near Melbourn, Cambridgeshire, spirit-merchant, lately out of business, an Insolvent Debtor, having been filed in the Court of Bankruptcy, and Interim Order for Protection of Process having been given to the said John Jarman under the provisions of the statutes in that case made and provided, the said John Jarman is hereby required to appear in Court before Joshua Evans, Esquire, the Commissioner acting in the matter of the said Petition, on the twelfth day of May next, at eleven o’clock in the forenoon precisely, at the Court of Bankruptcy, Basinghall Sreet, London, for his first examination touching his debts, estate, and effects, and to be further dealt with according to the provisions of the said statutes: and Notice is hereby given, that the choice of Assignees is to take place at the time so appointed.

All persons indebted to the said John Jarman or who have any of his effects, are not to pay or deliver the same but to Mr. W. Bell, of No 3, Moorgate Street Buildings, London, the Official Assignee, nominated in that behalf by the Commissioner acting in the matter of the said Petition. W. Atkinson, Messenger’

The Court of Chancery had jurisdiction over insolvency and bankruptcy matters and, originally, proceedings took place in Lincoln’s Inn and later the London Guildhall. By the eighteenth century it had become practice for them to be dealt with by commissioners who sat as committees of three, five or seven. Many of the commissioners were political appointees with no specialist knowledge of the work they were required to do. The system fell into disrepute and by 1832 a permanent bankruptcy court had been created. The London Bankruptcy Court took over, housed in a building in Basinghall Street and it is there that John Jarman’s case was heard. The business of the court was managed by two judges and five commissioners. John Jarman’s case was heard by a commissioner, though most of them had been abolished in 1831.

Commissioners decided if a debtor was eligible to be declared bankrupt and would oversee the distribution of assets. As this extract from the National Archives makes clear, “Insolvent debtors and bankrupts are different. To qualify for bankruptcy you were supposed to be a trader, making your living by buying and selling. Insolvent debtors were individuals unable to pay their debts. Only after 1861 could insolvent debtors apply for bankruptcy.” As John Jarman’s case dates from the mid 1840s this is presumably why he is referred to as an ‘insolvent debtor’ (or simply ‘insolvent’), even though we are told that he was a ‘spirit-merchant, lately out of business’.

On 16th May, the same newspaper reported the outcome of the proceedings before Mr Commissioner Evans:

‘Mr Jones, solicitor of Quality Court, Chancery Lane, supported the application. It appeared that the insolvent’s debts are £288.4s.6d and credits £39.4s.7d…His profits from August 1840 to 1841 were £150; to August 1842, £150; 1843, £150; to August 1844, £110 and in £1845, £60. According to the other side of the balance sheet the insolvent’s expenses during the same period were: housekeeping, £80 per year; expenses from house, £60 per annum; wearing apparel, £20; and keep of horse and expenses, £30 per year….etc. He also paid for interest on mortgages (period not stated), £183, law expenses £208.5s.5d; and under the head of losses he makes the following statement: “September, 1844, amount stolen from pocket, £245” (that would have been a large sum to have been carrying with him at the time). In the year 1839, the insolvent became entitled to considerable property under the will of his father, consisting of freehold land and two cottages at Meldreth, which he subsequently mortgaged for £600 to Mr George Hallam of Cambridge and Edward Freshwater, Esquire, of this county, for £300. The property has since been disposed of and passed from the insolvent.

The learned Commissioner enquired if there was any creditor in attendance to oppose the insolvent and Mr Jones answered in the negative, whereupon the Court appointed the 25th instant for him to apply for his final order, and granted him protection in the interim.’

A later newspaper report of the application for his final insolvency order appeared on 26th May; John Jarman’s case had again come before Mr Commissioner Evans. On this occasion the application was opposed by a Mr Cooke on behalf of Messrs. Alllnutt and Co., wine merchants of London, to whom the insolvent was indebted in the sum of £186; Mr Lucas appeared in support of the application. ‘It appeared from the examination of the insolvent that, in October (previously reported as September) 1844, he mortgaged his property for £300 for the purposes of paying Messrs. Allnutt and other creditors. After receiving £254 he walked into Cambridge fair with the money in his pocket, accompanied by Mr. Pryme, a friend of his. After spending some time in the fair he missed the money and mentioned his loss to Mr. Pryme who recommended him to go to the police station and give information of the robbery to the police. He afterwards went to the person from whom he received the notes with a view to ascertaining the numbers of them but he could not gain the necessary information and the police were unable to assist him beyond circulating some handbills stating his loss. He accordingly went home that night and the next day renewed enquiries in Cambridge fair but did not succeed in tracing the money.’

‘The learned Commissioner said that although this loss might appear to be a very unlikely story, yet it was not either impossible or improbable that the insolvent might have been robbed and, as there was no evidence to contradict his statement, he must grant him the final order and protection.The insolvent’s application was therefore granted and the opposing creditors applied for and were appointed assignees.’

It is interesting to note that the Jarman family were living in Meldreth as early as 1602 and possibly before. The John Jarman whose financial difficulties are reported here appears to have been born and baptised in Meldreth in June 1818, the son of another John Jarman who was a farmer and liquor merchant. His parents married at Holy Trinity Church in January 1818 and the witnesses were Susan Holder and John Holder, confirming a link between the Jarmans and another long-established Meldreth family, the Holders.

The 1841 census for Meldreth shows John Jarman living with his mother and he is already listed as a liquor merchant at this point. His father had died in 1835 and it seems that he then carried on the business with his mother; the newspaper clipping above shows an advertisement placed in the same year confirming that the business would continue and appealing for the support of previous customers. But it probably ran into difficulties because the estates of mother and son were being advertised for sale by 1845 (right), shortly before the insolvency proceedings against John Jarman began. John himself died in 1867 and is buried in Meldreth’s Holy Trinity Churchyard.