You are here: HomenextTopicsnextLaw and OrdernextMeldreth Servant Steals from Money Boxes belonging to her Master's Children, 1891 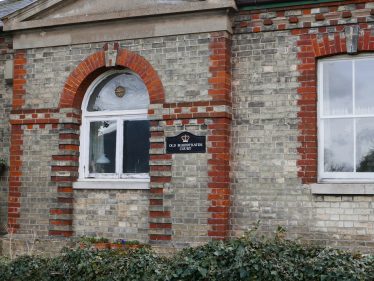 zoom
The old Magistrates' Court in Melbourn (now a private house), where the case against Emily Humphrey was heard
John Crawforth, March 2015 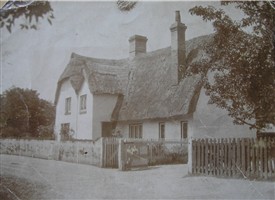 zoom
Chiswick Farm House, where it is thought the offence took place, shown in the 1920s when it was still owned by the Howard family
Unknown photographer

Appearing before the magistrates at Melbourn Petty Sessions on 13th March 1891, Emily Jessie Humphrey, domestic servant, was charged with stealing 30 shillings, belonging to her master, at Meldreth on 7th February of the same year. The Royston Crow carried the following report:

‘Andrew Howard said, “I am a farmer and live at Meldreth. Until 7th February last, the defendant was in my employ as a domestic servant. On or about 7th February we lost some money. It was about a week afterwards that I looked into the children’s money boxes and found the money gone. The money was in the three boxes produced (in court). They were kept in the children’s bedroom in a drawer. I kept the keys. There were two Swiss coins among the money and they were missing. As near as I could say there would be about 30 shillings in the boxes. I had seen it safe in the boxes about three or four months before. One of the little boys wanted some money out on 16th February and on opening the boxes I discovered that the money was gone…There was nothing left but a few coppers in each box. In consequence of that I sent for Sergeant Ding and placed it in his hands. The room had been empty for some time as the children had been out for a week or more. I think it was the next day after I had given information to Sgt. Ding that he came with the Swiss coins and showed them to me.” Two coins were produced exactly like the two missing and bearing the same dates and inscription. Mr Howard continued, “I tried the three keys and saw that one of the keys would open the three boxes. These keys were the defendant’s keys. Money was missing from each of the boxes.”

The defendant had nothing to ask the witness. Charlotte Ann Reed, wife of George Reed, said, “I live at Whaddon. The defendant is my niece. The Sunday before Mr Ding came to me, I went to meet her on the road and she gave me a piece of money – I think it was one of the (Swiss) coins. She did not say where she got it from but said, ‘I have got a piece of foreign money, I will give it to you if you like’ and I took it. I afterwards gave it to Sgt. Ding. She is my sister’s daughter. Her mother is not living but her father is; I think he is somewhere in London.”

Edward Jude said, “I live at Meldreth and am a labourer. I know the defendant, and have been with her. A month yesterday, she gave me one of the Swiss coins. When she gave it to me she said it came from a foreign land and would do to put on my watch chain. She did not tell me where she had got it from. I kept it but did not put it on my watch chain. I gave it to Sgt. Ding.”

Police Sergeant Thomas Ding, stationed at Melbourn, said, “On 16th February I received a message late at night from Mr Howard and I went to see him on the morning of 17th. From what Mr Howard told me and from inquiries I went to Royston. There I saw the defendant. I said to her, ‘I want to see your keys, as there has been some money stolen from Mr Howard’s at Meldreth where you have been living, from the money boxes belonging to his children. What account can you give of the money you have been spending?’ She said she did not take the money and didn’t know anything about it. The money that she spent was from her wages that she received monthly. She gave me the keys (that have been produced in court) and I then tried them upon the small box…which I had with me and found that two of them fitted the box. Her aunt, Julia Clark, was present and said ‘if you took the money you had better tell the truth about it.’ That was at her aunt’s at Royston Gas House. She then said, ‘I did take some from one box; I took a shilling, two sixpences and a twenty cent piece. From another box I took the same. The other one I took three shillings from.’ She said she gave the two twenty cent pieces away – one to her aunt, Charlotte Ann Reed, of Whaddon and the other to a young man named Jude, of Meldreth.”

The Magistrates retired for a few minutes and, upon their return, the Chairman, addressing the defendant, said the case was very clear against her. They had, however, taken into consideration all the surroundings – that she had not had the advantage of a mother to bring her up, and that her father seemed to have gone away and deserted her. In the ordinary course she would have been sent to gaol because to rob her master was a very bad offence, but looking to her age and the surroundings of the case, they thought it a pity to send her to gaol. They should therefore give her one more chance of retrieving her character and living the life of an honest woman but hoped that she would not think from their leniency towards her that they thought it was a trivial case. It was a serious matter and he hoped it would be a warning to her never again to take what did not belong to her, or she would most assuredly be sent to gaol. Under the circumstances she would be fined 20 shillings, or go to prison for 14 days.

The defendant was understood to say that she had no money. The Chairman said the Bench would give her time and perhaps her aunt would see to it. Mrs. Reed, the defendant’s aunt, said the girl’s grandfather would not pay, nor do anything for her and she did not suppose the girl’s father would….The Chairman said they would allow her one month and he hoped that her friends would not allow her to go to gaol. Mrs. Reed thanked the Bench for their leniency towards the girl.’

Note: Chiswick Farm House, where the offence reported here is thought to have taken place, had been in the ownership of the Howard Family since before 1841. It was bought by Terry Dash’s father, Bill, from Andrew Howard in 1960. Howard Road in Meldreth was named after the Howard family.