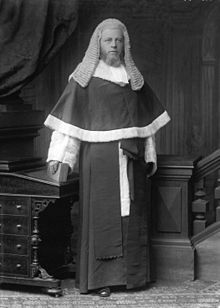 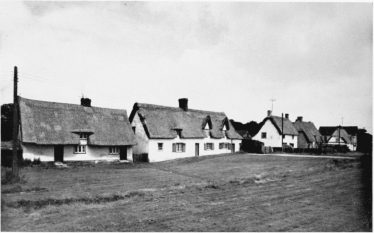 zoom
Seventeenth century cottages on the North side of the Green, Barrington - the village where the plaintiff and defendant 'became acquainted'
From 'An Inventory of the Historical Monuments of Cambridgeshire, Vol. 1 (London 1968); british-history.ac.uk 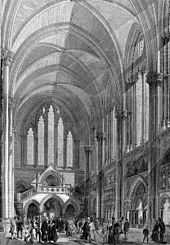 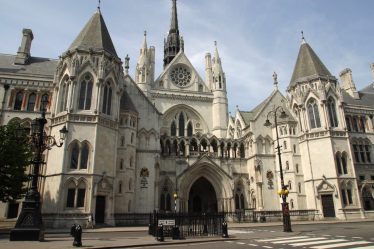 zoom
Royal Courts of Justice, Strand, London, as they are today
www.londontown.com

In the Court of the Queen’s Bench on Wednesday, reported the Royston Crow on 17th February 1882, a case was heard before Mr Justice Lopes and a Common Jury:

‘The Plaintiff in the action sought to recover damages for breach of a promise of marriage. Mr Cock and Mr Scott appeared for the plaintiff, Mr Anderson for the defendant. Mr Cock said that the plaintiff in this case, a young woman, lived at Meldreth in Cambridgeshire, and the defendant lived at Barrington, in the same county.  He was the son of a farmer who had occupied a very good position; on his death the defendant came into the possession of about £5,000 and since then he had been a corn dealer, and he also let out machinery.

In 1870 the plaintiff went to keep house for her brother, a butcher, at Barrington and whilst there she became acquainted with the defendant. She was then about seventeen and he about thirty. He proposed that he should marry her but said that he could not do so whilst his father lived for fear that he should be disinherited. The result of this promise was that the plaintiff, in 1872, had a child which, however, died.

After this the defendant broke off his relations with the plaintiff and she, in 1873 or 1874, had a child by a man named Morgan. The defendant knew of this and when he again met the plaintiff some three or four years later he said he was still fond of her and he renewed his promise to marry her on the death of his father. Thereupon the intimacy between the plaintiff and the defendant was resumed and two more children were born. The father at length died, but the defendant made excuses for not performing his promise; he married another lady. Some compensation was then asked of him. Mr Hart acted for the defendant in the negotiations that took place.

It was arranged that the defendant should receive £175 but the defendant would not carry out the arrangement, hence this action. Mr Justice Lopes, as soon as the plaintiff was called into the witness box, suggested that some amicable arrangement had better be come to now and after an interview by counsel with his lordship in a private room, this end was accomplished.

Mr Anderson wished to state publicly that the defendant had always asserted that he had never promised to marry the plaintiff, but still felt it was his duty to make some provision for the young children. Mr Justice Lopes thought that the jury had heard enough of the case to understand that it would be better to arrange the matter rather than have a number of unpleasant circumstances made public.

A verdict was by consent taken for the plaintiff: damages of £125.’

The Judge in this case was Henry Charles Lopes, 1st Baron Ludlow, PC, QC (1828 – 1899). He was educated at Winchester and Balliol College, Oxford and called to the Bar, Inner Temple, in 1852. He became Queen’s Counsel in 1868 and was appointed a Justice of the Common Pleas Division of the High Court of Justice in 1876, the year in which he was knighted. He later served as a Lord Justice of Appeal and a member of the Privy Council. In 1897 he was raised to the peerage as Baron Ludlow in the county of Witshire.

The Queen’s Bench Division is part of the High Court of Justice. It was created by the Supreme Court of Judicature Act, 1873. Since 1882, the year of this Meldreth case, sittings of the the High Court have been held at the Royal Courts of Justice in the Strand, London. It was opened by Queen Victoria.