You are here: HomenextTopicsnextLaw and OrdernextTaking Home the Christmas Duck 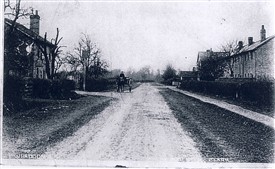 zoom
Whaddon Village in the early 1900s. The Queen Adelaide stands on the left hand side
Robert H Clarke postcard 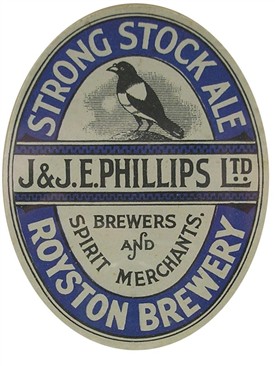 zoom
The Queen Adelaide sold this particular ale. Its actual strength is not known but may have contributed to Joshua Lovely's condition
Phillips Brewery Label Courtesy of Royston Museum 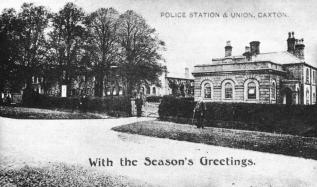 zoom
The Arrington Police Station and Court building is shown here on the right. The Caxton and Arrington Union Workhouse is behind the trees on the left
Contemporary postcard, Cambridgeshire Collection

The Cambridge Daily News of 17th January 1899 carried under this heading the following report:

‘At Arrington Petty Sessions on Monday before Mr E S Fordham and other magistrates, Joshua Lovely (59), labourer of Whaddon, was summoned at the instance of Superintendent Wilderspin for having been drunk on the highway, at Meldreth, on December 24th last. The defendant pleaded guilty.

Police Sergeant Ding, of Melbourn, stated that on the evening in question he saw the defendant leave the Queen Adelaide public house in rather a drunken condition and after he had proceeded on the road a short distance he fell down and was unable to get up. (Note: as Tim Gane’s research elsewhere on this website makes clear, this public house had, at various times, been in both Meldreth and Whaddon, due to changes in the parish boundaries).

After I got him home he said “This is the first time I have been helped home by a policeman and if you prosecute me for being drunk I must own up that I was so.” The Chairman: “From what you tell us it appears that the defendant must have been drunk on licensed premises.” Superintendent Wilderspin stated that inquiries had been made in regard to the defendant being drunk on licensed premises but they were unable to prove that the defendant was served with drink at the Queen Adelaide public house. (Note: If it could have been established that the landlord had sold intoxicating drink to someone who was already clearly drunk this might have amounted to a breach of licensing regulations.)

The witness Ding (continuing) said the defendant stated he left work at six o’clock and that he had only had one pint of beer but this, together with some tobacco he had smoked, had made him feel dizzy. The Chairman: “Have you ascertained if this was all he had?” The witness “Yes, sir, but I cannot find out whether he even had one pint.” There was a wedding in the district and the defendant was given some drink. The witness further added that the defendant had a duck under his arm which he had won in a draw.

Is there anything known against the defendant?” The witness: “No, sir; he is an honest, hard-working man.” The Chairman (to the defendant) “Have you anything to say?”. The defendant: “I am sorry that I should have got in such a condition but I am not used to drinking much beer, nor yet smoking and after I had been smoking for a time I came over dizzy, and as soon as I got home I went straight to bed.”

The Chairman: “And you did not stay up to partake of the lovely duck?”. The defendant: “Not me, sir.” The Chairman: “Anything else to say?” The defendant: “No, sir.” The Chairman: “Well, my colleagues and I are inclined to believe that you were not altogether so drunk as might be supposed. We know that it was Christmas time and, doubtless, you had an extra glass, together with some tobacco which, perhaps, made you feel dizzy, though your coming from licensed premises makes one feel inclined to imagine that something stronger than tobacco accounted for your being dizzy.”

“I do not feel disposed to deal harshly with you; and seeing that you are an honest, hard-working man and did not, when approached by the police sergeant, behave in an abusive manner, you will be discharged and I hope you will take care in the future.” The defendant: “I will, sir.” As he was leaving the court Lovely thanked the magistrates.’

Note: With thanks to Linda Clarke for her help in researching this case (a similar report appeared in the Royston Crow).