"The Old Cow Got Round It" 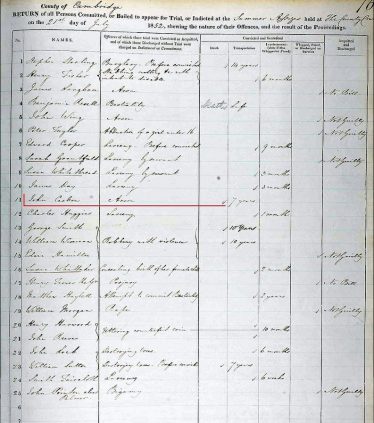 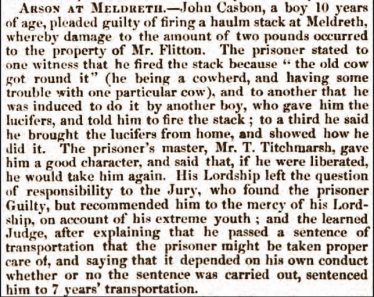 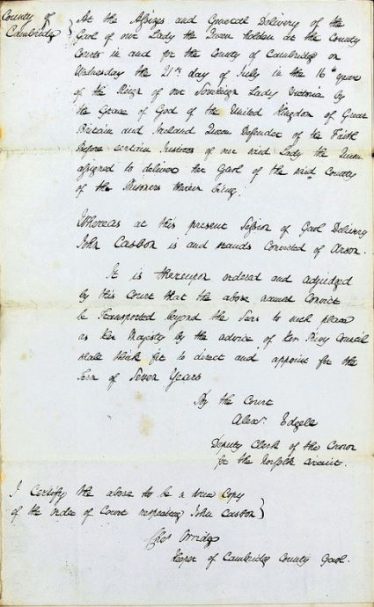 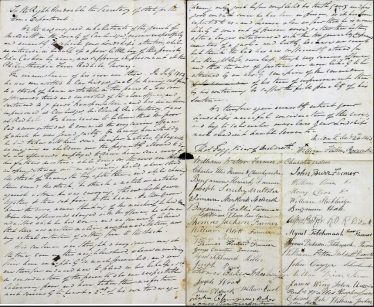 zoom
Letter from the citizens of Meldreth
England and Wales, Crime, Prisons and Punishment, 1770-1935; accessed on FindMyPast

Several months ago I came across the record shown on the right which is entitled “Return of all Persons Committed, or Bailed to appear for Trial, or Indicted at the Summer Assizes held at The County Court on the 21st day of July 1852, shewing the nature of their Offences, and the result of the Proceedings.”[1]

I was naturally curious to know more about the crime and punishment, and more importantly which John Casbon it referred to. Below is a transcription and on the right, an image of a short newspaper report of the case I found on The British Newspaper Archive.[2]

My goodness – this was a 10-year old boy being sent to Australia, sentenced to 7 years’ transportation! It seems pretty extreme to me. [For information about transportation and what it meant, please see the “Ponies, Turkeys and Transportation” page on this website.]

ARSON AT MELDRETH-John Casbon, a boy 10 years of age, pleaded guilty of firing a haulm stack at Meldreth whereby damage to the amount of two pounds occurred to the property of Mr Flitton. The prisoner stated to one witness that he fired the stack because “the old cow got round it” (he being a cowherd, and having some trouble with one particular cow), and to another that he was induced to do it by another boy, who gave him the lucifers and told him to fire the stack; to a third he said he brought the lucifers from home, and showed how he did it. The prisoner’s master, Mr T Titchmarsh, gave him a good character, and said that, if he were liberated, he would take him again. His Lordship left the question of responsibility to the Jury, who found the prisoner guilty, but recommended him to the mercy of his Lordship, on account of his extreme youth; and the learned Judge, after explaining that he passed a sentence of transportation that the prisoner might be taken proper care of, and saying that it depended on his own conduct whether or no the sentence was carried out, sentenced him to 7 years’ transportation.

It is thought that Mr William Flitton was at Sheene Mill at this time. By way of explanation, haulm is defined as “the stems or tops of crop plants (as peas or potatoes) especially after the crop has been gathered.”[3] Lucifer is an old term for a match. The fact that the jury “recommended him to the mercy of his Lordship” and the judge explained that “it depended on his own conduct whether or no the sentence was carried out” suggests that the judge would consider a more lenient punishment.

Putting the punishment aside for just a moment, there’s an element of humor to the story. I can just see the boy telling his story, first blaming it on the cow, and eventually getting around to something closer to the truth.

Based on the fact that this occurred in Meldreth, and his age, the boy was most likely John Casbon, son of William and Ann (Barnes) Casbon, baptised July 16, 1843 in Meldreth..  A copy of his baptism record is shown on the right.

John’s father William is listed in the 1851 census as an ‘Ag[ricultural] Labourer’[5] (as were the majority of my Meldreth ancestors), meaning he worked for wages and was not an independent landowner.[6] Agricultural Labourers were among the lower working classes in British society. Wages and employment were not guaranteed and were dependent on economic conditions, crop yields, physical ability, etc. Agricultural labourers were not given the right to vote in England until 1884.[7]

Getting back to young John and his sentence, here’s the sequence of events I’ve been able to piece together concerning his conviction and punishment. He was convicted on July 21st, 1852.[8] The court summary reads as follows[9]:

At the Assizes and General Delivery of the Gaol of our Lady the Queen holden at the County Courts in and for the County of Cambridge on Wednesday the 21st day of July in the 16th year of the Reign of our Sovereign Lady Victoria by the Grace of God of the United Kingdom of Great Britain and Ireland Queen Defender of the Faith Before certain Justices of our said Lady the Queen assigned to deliver her Gaol of the said County of the Prisoners therein bring.
Whereas at this present Session of Gaol Delivery John Casbon is and stands Convicted of Arson.
It is thereupon ordered and adjuidged by this court that the above named Convict be Transported beyond the Seas to such place as her Majesty by the advice of her Privy Concil shall think fit to direct and appoint for the Term of Seven Years

By the Court
Alex.r Edgell
Deputy Clerk of the Crown for the Norfolk Circuit.

The judge in the case expressed his intent that John should be sent to the Penitentiary and “then being discharged after a year or two” depending on his conduct while in prison.[10]

He was initially imprisoned in Cambridge gaol, known as The Castle, and in November of that year was transferred to Millbank prison in London.[11] On Dec 20, 1852 he was “removed under a Conditional Pardon to the Philanthropic Institution, Redhill near Reigate Surrey.”[12] This institution was a working farm established in 1849 with the noble goal of reforming juvenile offenders.[13]

In October 1853, a group of citizens from Meldreth petitioned the Secretary of State for the Home Department with the letter shown to the right. Click on the image to see a larger version.[14]

To the Right Honorable the Secretary of State for the Home Department.
We the undersigned inhabitants of the parish of Meldreth in the county of Cambridge desire respectfully and earnestly to solicit your Lordship’s attention, while we intercede in behalf of a poor little boy of this parish, John Casbon by name, now suffering imprisonment at the Philanthropic Farm, Redhill, Surrey.
The circumstances of his case are these. In July 1852 he was committed to Cambridge gaol for having set fire to a stack of haum or stubble in this parish – was soon afterwards tried and convicted of the above offence, and sentenced to 7 years’ transportation – and has since been imprisoned at Cambridge, Milbank Penitentiary, & now at Redhill. We have reason to believe that this poor lad never intended to commit the very serious offence of which he was found guilty. On leaving home that day he had taken with him some lucifer matches, to play with, we imagine, as children are too frequently allowed to do. He was afterwards employed to drive home some cows to his father’s master’s – while doing so, the cows ran through an open gateway into an adjoining field, where stood the stack of haum, the boy after them – and while chasing them round the stack, he struck a match or matches against a stone he was carrying, threw both down together and thus set fire to the haum. He then drove home the cows, never thinking of the mischief he had done. When soon afterwards charged with the offence, he at once admitted what he had done – and we sincerely believe that there was neither malice, nor premeditation, nor an actual intention of setting fire to the stack.
His sentence was thought a very severe one, at the time, even in this neighbourhood, where incendiary fires have unhappily so much prevailed; and we are therefore induced now to plead in his behalf – 1st., in consideration of the parents, who are respectable labouring poor, and have taken their misfortune most seriously to heart 2nd., of his own tender age, (having only just before completed his tenth year) and his good conduct since he has been in prison, as it has been reported to us – and because also we fear that he is more likely to come out of prison worse, rather than better, after a longer intercourse with the too generally depressed inmates of a gaol – and lastly, because we cannot but think the lad has now sufficiently atoned for his thoughtless, careless, though very serious offence; and that the ends of justice are more likely to be attained by an early remission of the remainder of his term of imprisonment than by his continuing to suffer the full penalty of his sentence.
We therefore again earnestly entreat your Lordship’s merciful consideration of this case; and beg to subscribe ourselves your Lordship’s most obedient humble servants –

(In addition to the hyperlinked names, there may be other mentions of these and some of the other names on this website: enter a name into the search box at the top of the page to find all references of a name.)

I find the letter to be quite moving. Even the prosecutor (i.e., Mr Flitton, the man who suffered damages from the fire) signed the letter – twice!

Apparently the Home Secretary was not moved. His response was “Inform Mr Fogg that it appears very undesirable to remove this Boy from the Institution where he now is & where he will receive proper Instruction.”[15]

I haven’t been able to locate records stating when John was released from the Philanthropic Institution. I can say that later in life he married and moved to the London area, where he died in 1927.[16] It’s possible that he has living descendants.

This article was adapted from an article of the same name posted on 7 October 2016 on Our Casbon Journey, a blog by Jon Casbon. We would like to thank Jon for allowing us to reproduce his research here.