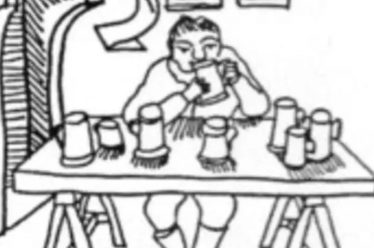 zoom
An Aletaster at work
from John Lowe's book, "Burnley"

Bread and ale were staples of medieval village life and their quality was regulated through assizes that set appropriate standards for their weight, measure, quality or quantity. The assize for bread, for example, fixed price and weight according to the current price of wheat. The assize for ale worked in a similar way and set the price of a gallon in relation to the price of grain. The assize had to be determined and enforced locally because of local price variations. In order to test the quality and quantity of ale and bread local aletasters were elected from among villagers and their appointment confirmed at manorial Leet courts.

The most remarkable aspect of these extracts is that they suggest that the system was honoured more in the breach rather than in the observance. Almost all the references to bread and ale are of fines levied for baking or brewing or selling in contravention of the relevant assize. Typically the fines are of 3d or 6d and never exceed 12d. Why they vary is not clear. The references to aletasters are also usually fines imposed “for not performing the office of aletaster” and also typically range between 3d and 6d. Every Leet court imposed at least one fine and some record as many as ten separate offences.

These fines do not appear to be intended as deterrents. Often the same person appears year after year to face the same penalty. For example, in 1316 Reginald Cavel was fined 12p for brewing contrary to the assize. In 1317 he was similarly fined 12p for baking while his wife was fined 6p for brewing. In 1318 he again faced another fine of 6d for baking. Nor does non-compliance appear to have prevented someone acting as aletaster.  Hugh Cagwyne faced fines for brewing in 1329, 1334, and 1335. None of this prevented him from acting as aletaster and then being fined on nine separate occasions for non-compliance in that role between 1324 and 1339. (Interestingly, this would often be a family affair and his wife also faced fines for brewing in 1322, 1324 and 1327.)

Why did the court not enforce matters more strictly? It is possible that this process was treated as a convenient revenue stream profitable to the lord and, in effect, as a licence fee payable by those cottagers whose livelihood partly derived from the production and sale of bread and ale. This seems to have been the case elsewhere. In Norwich, for example, many wives apparently brewed ale and sold it to their neighbours above statutory prices and fines for this offence were one of the most lucrative sources of income for city officials.

How did the role of aletaster function in this environment? What might seem to have been a very desirable role with ample opportunities for free food and drink sampling may not have been seen in that light by villagers. In fact, in 1318 William Chastein refused to take up the office (he was pardoned by the court). Life in a small medieval village must have placed a premium on good working relations and much day to day life would depend on the satisfactory production and sale of bread and ale. The policing role of aletaster may have been difficult to enforce without antagonising neighbours engaged in this cottage industry. This may help explain why the role seems to have largely consisted of turning a blind eye to transgressions and paying a regular court fine for doing so.

Below are the names of those who took on the role during this period. The list illustrates another possible reason for the lax approach to ale tasting. Some ten different names appear over time in the rolls. Six appear to be based in Meldreth while a further four seem to have acted for the people of Eversden. As already noted, aletasters (and their wives) could be actively involved in either brewing or baking and this is true of at least four of the people listed below. One is specifically identified as “the baker” while acting as aletaster. Another reason for the ‘blind eye’ approach may therefore be that sometimes the fox was being asked to guard the hen coop!

Did the system work to the detriment or advantage of villagers? One example shows how difficult it is to decide. In 1337 Agnes Bocher of Eversden was fined 3p for selling ale by two gallons and quart measures and not by the authorised one gallon. Perhaps she was simply responding to demand for an excellent brew – or perhaps by avoiding the regulated gallon measure (which was tested) she had an opportunity to provide short-measures to her customers. Unfortunately we cannot tell, but the fact that the system appeared to continue with little change suggests that both villagers and lord were content with matters as they stood.