The Destruction of Topcliffe Manor House 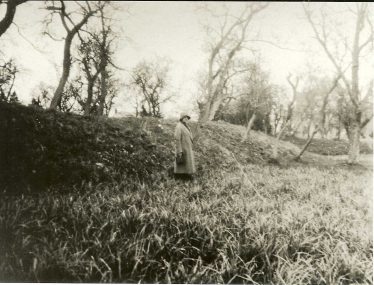 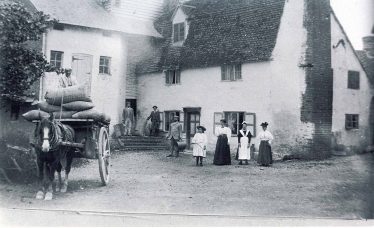 The origin of this poem is not known, but it was published in The Royston Crow on 17th January 1941, having been sent to the paper by Herbert George Peters of The Manor Farm, Orwell. Herbert spent ten years of his life at the mill, from 1887 to 1897, when it was operated by his father, George Peters.

The poem was also referred to in an article in The Royston Crow on 3rd September 1965, which stated that the destruction of the manor house described in the poem had taken place at the end of the 13th century.

Near the clear and sparkling brooklet
Stood a building broad and tall;
Ivy climbed up all around it,
Lichen clothed its wooden wall.

High it reared its massive turrets,
Low it held its dungeons dire;
Half-way up the walls and crevice
For the smoke of the all fire.

A black moat ran around its walls,
Both wide was it and deep;
And safe it did from enemies
The ancient manor keep.

Crossed over by a drawbridge
Up in peace as well as war,
It was ne’er kept down unused
For this was an ancient law.

Lived there in this ancient manor
A rich baron and his wife,
With their numerous family,
The pride of all their life.

So might he live at peace with all men
Ne’er injustice would he do:
His serfs they loved him e’er, obeyed him,
All the people round him too.

All his neighbours, save one baron
Who lived several miles away,
Who had hated and had wished him
Dead for many a bygone day.

‘Twas because his serfs disliked him
And oft mentioned Norma’s name
As the type of justice, honour,
Till he flushed with rage and shame.

Then there came a season when he
Formed a desperate thought in mind
To burn Norma’s house and scatter
All its ashes to the wind.

And fate unfortunately gave him
Help with unexpected hand;
For there came unto his manor
Outlaws in a lawless band.

Then he lay the thought before them
And they granted his request,
Saying they would burn or bring them
To him, which he thought was best.

Then he answered with a sneer
That he could no captives keep;
Take them one and all and bind them,
Burn them in a single heap.

And the lawless band, with great glee
That some blood was on their hands,
Marched at once to Norma’s manor
Separated in three bands.

One to ask admittance and a
Lodging through the darksome night;
The others to swim o’er the dark moat
Whilst these had the baron’s sight.

The first band entered peacefully,
As if they were not foes
That would soon in dreadful manner
Terminate their earthly woes.

But when the second band was over
And they were ready with the sword,
Then they changed to enemies
At their terrible watchword –

“Blood!”  And uttering this with curses
Fell they on the unarmed band,
But they were not o’ercome quickly;
At the baron’s loud command.

The bridge was drawn up, doors were fastened
That no more should enter in;
Then with threats and shrieks and curses,
Rose the fearful conflict’s din.

For their master, well fought they;
But valour there had no avail;
The foeman’s steel their wooden staves
O’ercame without a fail.

Soon they were all prisoners,
Barring those who had been slain;
Then the doors were opened widely,
And in rushed all the lawless train.

Enraged that they were thus excluded,
Rushed they at the fast-bound men;
And had not their chief forbade them,
Would have slain them there and then.

But the chieftain took them singly,
Cutting off their arms and feet,
Slashed them with their cruel swords
Till they were like butcher’s meat.

The he piled up their bodies,
Set on fire that manor grey;
And it was ne’er rebuilded –
Not until the present day.