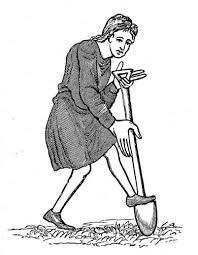 The first written record which tells us something specific about the land and people of Meldreth is the Domesday Book. This lists the number and status of people who were living in the village when the Normans came. There were peasants who possessed varying amounts of land (villagers, smallholders and cottagers), slaves (who possessed none) and also at least ten freemen (known as “sokemen”). Those who were not free owed their allegiance to a variety of Anglo-Saxon lords and ladies including the delightfully named “Edeva the Fair”.

The conquest clarified land ownership to a considerable degree and the answer to the question “who owns the land?” was simple: the King owned all the land. The feudal laws introduced by the Normans meant that all land was now owned by the king and there were strict limits on the freedom allowed to peasants. By 1086 the freemen who had lived in the village in the time of Edward the Confessor had become the victims of this Norman reorganisation and their independent farmlands had disappeared: there were no longer any free peasants in Meldreth.

While the king owned the land he could allocate it to those whom he chose to reward. These were the ‘tenants in chief’. There were around 900 tenants-in-chief in 1086 and only a few of these were English.  Interestingly, one of these rare exceptions can be found in Meldreth. A man called Kolsveinn or Colswein was allowed to continue to remain as tenant-in-chief of a small portion of village land together with two cottagers. As the name suggests, he may well have had a Scandinavian origins and been seen by the Normans as somehow distinct from the Anglo-Saxons they had defeated in the Conquest. Kolsveinn also continued to be a major landholder in Lincolnshire with over 50 manors in that shire.

The tenants-in-chief could, in turn, grant land to others, including various lords of manors who repaid this with their loyalty and services. Their land continued to be farmed by tenants and peasants. By the late 11th century ‘slaves’ had become ‘serfs’ (derived from the Latin word ‘servus’ which once meant slave). Over time both serfs and tenants came to enjoy greater security of tenure and gained further rights as English law developed. Manorial courts implemented a mixture of early common law and local variations – the “custom of the manor”. By the 14th century tenants could enjoy greater security of tenure and could, for example, pass land on to their eldest son (subject to the discretion of the lord and payment of a fee).

A longer version of this article, using specific examples from the Topcliffe Manorial Court Rolls, has been published in our section on Topcliffe Manor.