You are here: HomenextTopicsnextGardensnextMeldreth Open Gardens 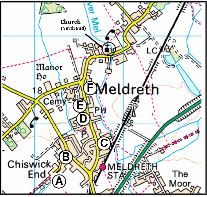 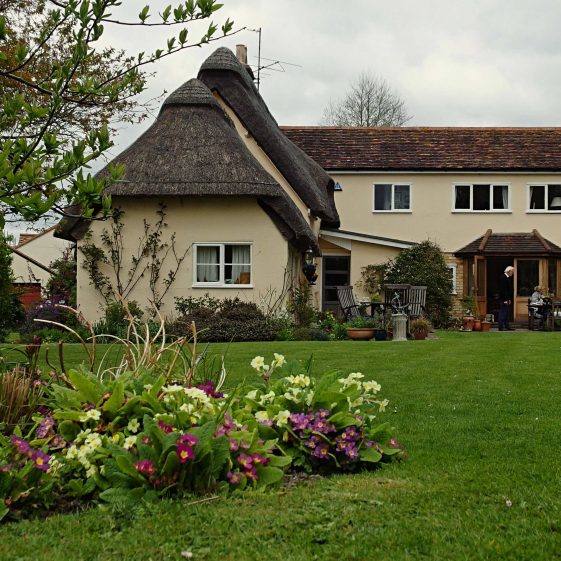 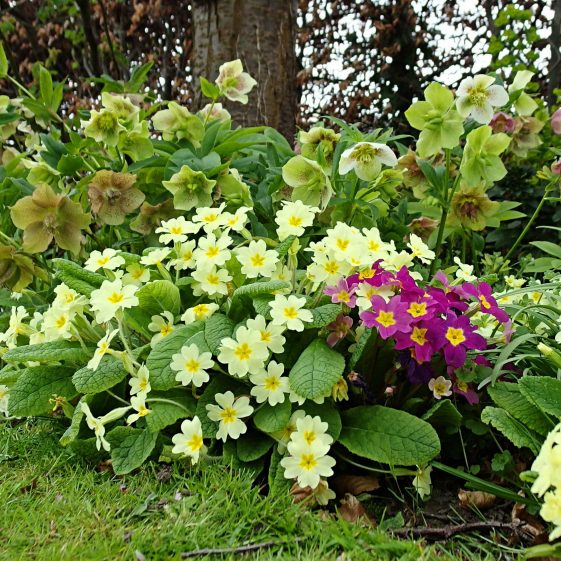 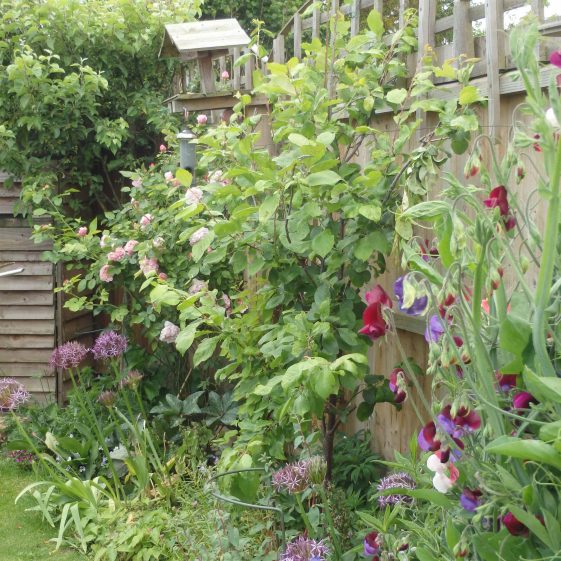 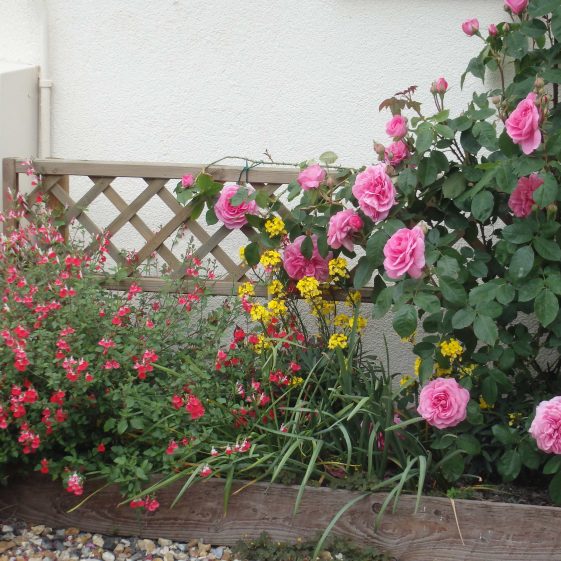 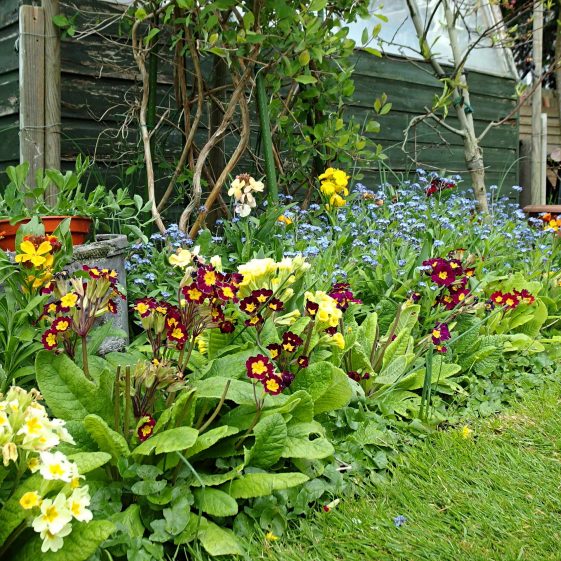 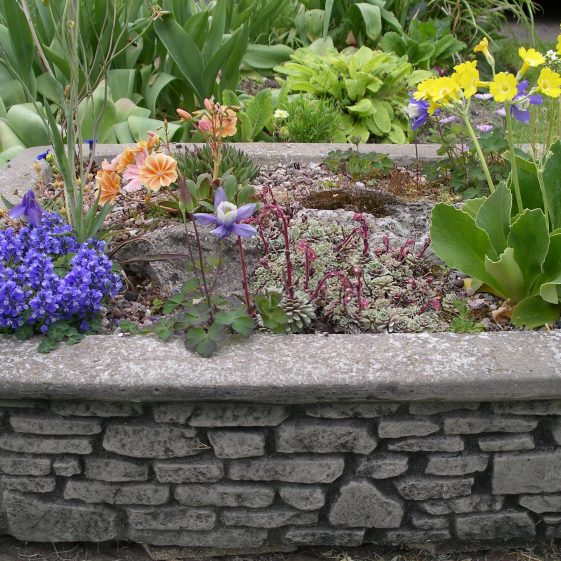 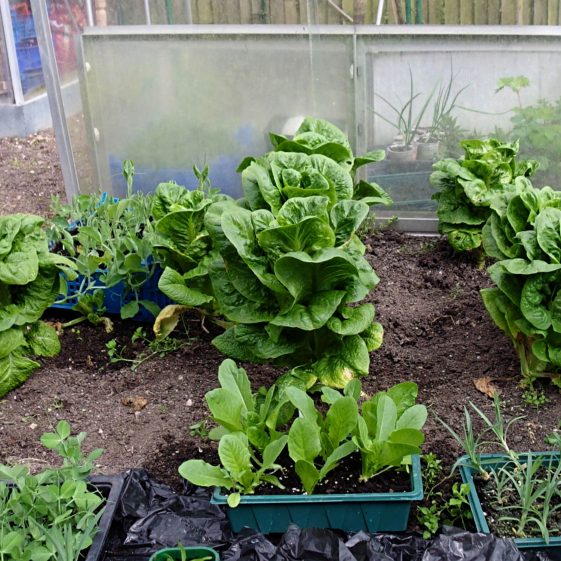 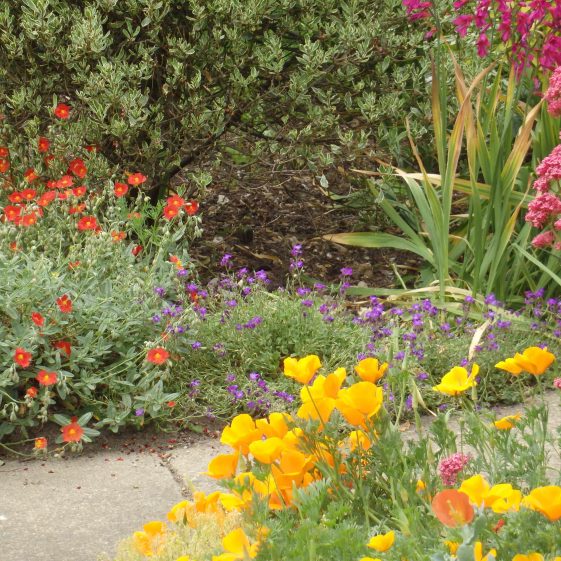 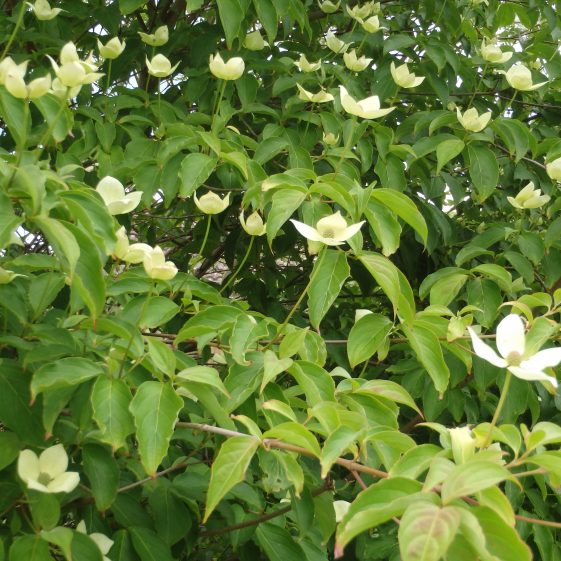 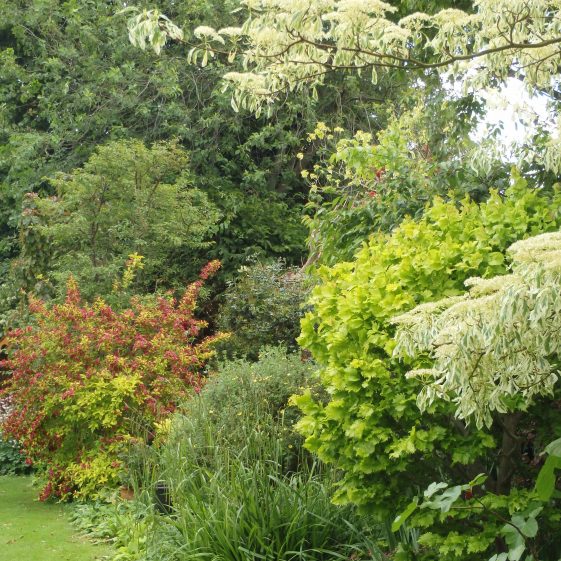 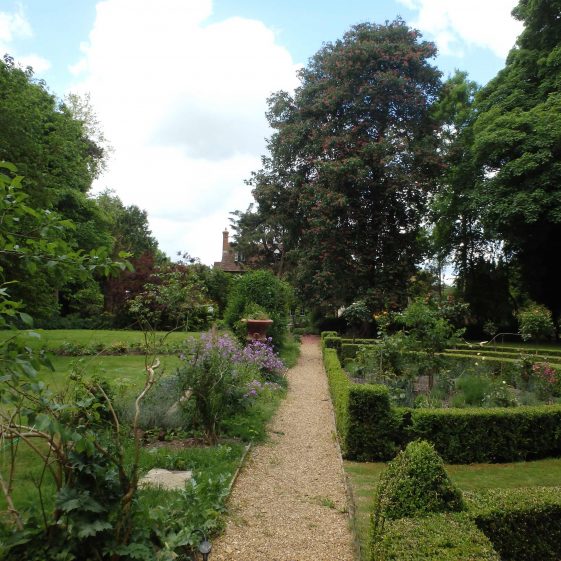 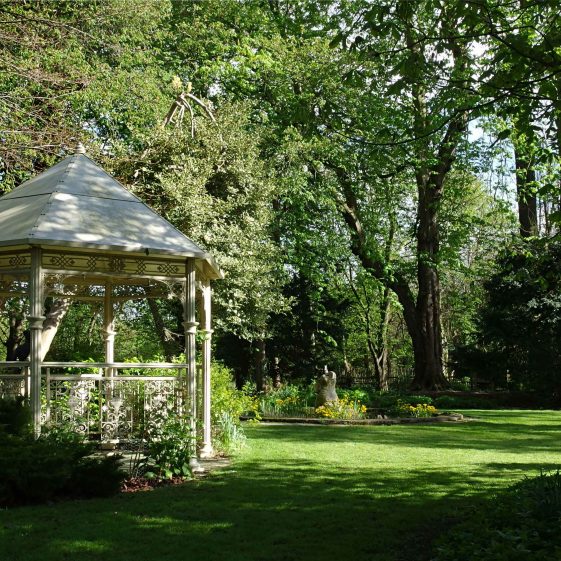 Many years ago, some time after the Friends of Holy Trinity Church in the village had been established, I noticed that several villages round about were having open gardens days, usually in June. It seemed a good fundraising idea and fun for gardeners and others to look around the gardens of those who were brave enough to open their gardens to the public.

Initially, as I remember, it was quite a small affair but always included some interesting demonstrations in the church and of course delicious tea and cakes were on sale. We always hoped for good weather and decided June was a good month to choose: the roses and delphiniums would be out and the many species of philadelphus too.

Jim and Jane Eggleton often had their garden open and with Jim being the best and most knowledgeable and experienced vegetable gardener, everybody enjoyed wandering around his tiny patch and listening to his advice on growing peaches and apricots, something most of us could only dream of. Margaret Lynch’s garden near the church was always popular too, with many beautiful and rare plants on view, and a lovely hornbeam avenue down to the River Mel. Many other people have opened their gardens since and the variety of gardens on show has been staggering.

As time went by there were so many gardens open locally, with June being the popular month, that the Friends decided to start having the gardens open in April, with the day being called Spring Open Gardens day. To begin with us gardeners were worried. What plants would be out? The daffodils and crocuses would be over! However it has proved a highly successful venture with virtually no competition and it has the advantage of getting the garden weeded, dug and generally tidied up before summer really starts with a vengeance. Most of us are looking after veg and deadheading roses and campanulas then, with no time to catch up with what should have been done in the winter and spring months in preparation!

Everyone needs a rest from this wonderful activity from time to time and most of the gardens change year by year, sometimes with exciting new additions. The gardeners who have veg patches in the allotments on Fenny Lane kindly open them occasionally too.

Two activities have grown out of open gardens. One is our column, “Notes from a Small Garden”, written by Jim Eggleton and myself. This is published monthly in the village magazine, Meldreth Matters. We also started a veg club, now known as Veg Plus. We meet every two months in somebody’s garden, and generally admire and support the gardener who kindly supplies coffee and cakes or drinks depending on whether the club meets at 10.00am or 5.00pm. We all bring plants and produce and “know how”. And what an enjoyable club it has turned out to be! I have learned an enormous amount as well as acquired some wonderful plants.

Below is a list of the gardens that were open in April 2015. My thanks to John Hagger for taking the photographs and for allowing me to include them in the gallery on this page.  John has also written about the event and has uploaded additional photographs which may be viewed via the following links:

You can also read John’s blog about his visit to the gardens that were open in 2011.

Teas in the Meeting Room

Gardens A to F

A) The Dumb Flea, Chiswick End – Julie and Peter Draper

We have been gardening here for 34 years and are still changing our ideas, clearing some parts and replanting others. Of course, plants and some shrubs do go past their best after 25 years and have to be replaced, but at last Julie feels she is winning the battle with the bindweed. Apart from the large ash and the old greengage trees, all the trees have been planted by us. Most of the old French roses have been replaced with the best of David Austin and, with an eye to the future; we have put in some new fruit trees. The borders are all mixed and may “go” if they become too much to manage.

If there has been a general idea behind the planning of the garden, it has been to have different areas, each with a distinctive character. The formal potager was laid out more than 15 years ago and now has as many flowers as well as vegetables. The polytunnel behind the yew hedge is a lovely place to hide away in, with seeds, cuttings to play with and the radio. Now that we have six grandchildren, we have to bear in mind their activities and be prepared for some unavoidable losses. Yet it is such fun to watch them all see how potatoes and beans grow, and for them to be able to build dens and rush around the garden and up the lane.

Since starting the garden from scratch in 2012, we have tried, with varying degrees of success, to fill the space with as many of our favourite plants as we can. Hellebores, sweet william, clematis, fritillary, anemone, sweet peas, lavender, honeysuckle, pulsatilla, aquilegia, verbena, honeysuckle, delphiniums and lupins among others, have all done well and plants brought from Yorkshire have weathered the change to East Anglia. The climbing roses at the front have been very prolific, notably “Gertrude Jeykell”, “Fighting Temeraire”, & “Pat Austin”.

The plum and cherry trees both gave a reasonable crop last year & as did the raspberries and blackberries, so we hope 2015 harvest is good. We have planted two more apple trees “Katy” and “Ashmeads Kernal”; the Cox’s Orange Pippin has yet to flower.

We have added an arbour and patio area, so we now have somewhere to sit and enjoy the fruits of our labour.

The small veg patch we created has yielded good crops of sugar snap peas and climbing French and runner beans, and salad crop fills in any vacant spaces. Cucumbers (“Beth Alpha”) and tomatoes (“Sungold”) have done well in the greenhouse.

When we moved here about 30 years ago, the garden was set to lawn and flower borders for half its length, with an old shed, a 6 x 8 greenhouse and a half-filled pond with damaged liner. The basic shape has remained but within the first year, we added a new shed, a 16 x 10 greenhouse and we mowed much of the long grass back into a lawn. The pond was re-lined and stocked with plants and fish. The spoil from the pond was converted into a rock garden and a derelict vegetable patch was brought back into use. All these features remain, with many of the original fish still surviving. The filter tank, buried in the rock garden, feeds a waterfall appreciated by fish and birds alike. The rock garden has expanded greatly and is one of the key features of the garden – a blaze of blue in March with Anemone blanda, Scilla iberica and Chionodoxa. Many rare or unusual species appear as the year progresses. Sadly, a large collection of hellebores will be past its best by mid-April but dozens of tulips should be opening in the borders. Most of the old fruit trees have succumbed to disease or wind but a few remain, along with a few replacements and a well-stocked cage of soft fruits. The old 8 x 6 greenhouse now serves as an alpine house for the propagation of plants for the rock garden and for those species that don’t like our alkaline soil. The larger greenhouse has heating and is used for more exotic species and for over-wintering tender plants that will go outside once the frosts have gone. Some ground is left rough at the bottom of the garden for wildlife. Fifty-eight species of birds have been recorded in the garden along with 20 butterflies and 325 species of moths.

Visiting Margaret and Jim’s garden in high summer the air was buzzing with bees and Jim had already had sightings of a number of butterflies. We saw a small tortoiseshell, a splendid peacock and a number of bees all sunning themselves in the tremendous variety of plants that Jim and Margaret grow (and all from seed).

This is a lovely garden, showing just how much can be grown in a compact space. There are spring flowers to delight the eye, but you can easily tell from the well managed vegetable plot that Jim really likes to eat what he grows. A chat with Jim will soon give you some tips for your allotment or vegetable patch! There are also fruit bushes, including apricots and peaches and the greenhouse will be packed at this time of year as it is well used in early spring to start off lots of plants. Altogether this is a really delightful small garden, showing you don’t need “rolling acres” to feed the family.

A mixed garden giving interest throughout the year, comprised of lawns, herbaceous borders, a vegetable bed and fruit trees. Topical flowering displays should include a bank of fritillaria imperialis (plus self seeded clumps), ribes speciosum and the usual narcissi, polynthus, polymonium tuulips and hyacinths.

Herbacious areas range from an old border (contaminated with ground elder) and a rose sickbed which is gradually being replaced with other species to newer island beds, plantings against trellises and walls and a new raised bed planted in 2004. Specimen trees include ginko biloba, lirodendron tulipa, koeleutra paniculata, prunus sargentii, yellow ash, and robinia pseudo acacia “Frisia”.

The original Victorian garden, planted with trees, was divided in the 1950s and we started to put them back together a year ago, taking out large hedges and wall. Much of the original planting and layout has been lost, although the circular flower beds have been planted to recreate a circular border from the original garden. To make the most of a large garden with such fascinating features as the river, formal pond and garden buildings (in addition to the plants themselves) we have to create a fusion of the Victorian planting and more natural woodland and wild flower areas creating different rooms and atmospheres throughout the garden. We’ve only been here a couple years and our garden is very much a work in progress; it is also a playground for us as well as our children. We encourage you to play here too but please keep an eye on your children by the water and when on the swings!

Homemade cakes served in the Meeting Room with tea or coffee

See the progress being made with the Kneeler Project – eighteen have been made in the latest style  and six more are being made.

Many of them reflect a memory or interest of the person making them – these are members of the congregation and local community. If you are interested in making a kneeler do let one of the demonstrators at the church know.

Members of the village vegetable club will have some items that can be purchased – outside the church if the weather is fine.

The Friends of Holy Trinity (registered charity no. 289736) was formed 31 years ago to support the fabric, fixtures and fittings of the church and its meeting room. For more information about the Friends or to be added to the email list for future events, please visit the FOHT website.