You are here: HomenextTopicsnextFiresnextNewspaper Correspondence about the Melbourn and Meldreth Fire Brigade, 1910

Newspaper Correspondence about the Melbourn and Meldreth Fire Brigade, 1910 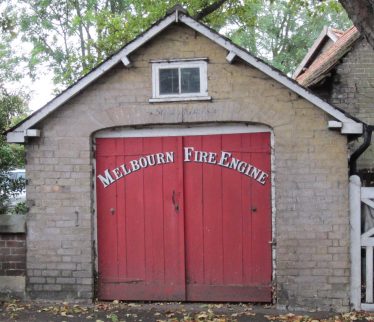 Meldreth shared a Fire Brigade with Melbourn. The small fire station was located in Station Road, Melbourn. Due to the high numbers of thatched cottages, both villages experienced numerous devastating fires. Serious fires in Meldreth in 1905, 1908 and 1910(?)* were the catalyst for this series of correspondence which appeared in the Herts & Cambs Reporter and Royston Crow in March 1910. Unfortunately, the situation does not appear to have improved: thirteen cottages were destroyed in Melbourn in May 1915.

A correspondent writes to us as follows:
One has heard a lot about a German invasion, but that is not the reason why Melbourn people sleep uncomfortably in their beds. We have a nearer invader than the Germans, for when it once comes upon us, we never know where its ravages will end. The word “Fire” is terrible enough during the day, but to hear it at night makes one tremble more for we know that our firemen are badly organised.  On our way to Meldreth Station if we look to the left, close beside Messrs. Coningsby & Son’s Establishment, we can see, if we look close enough, a little building whose doors bears these words, “Fire Engine,” for keys apply to Mr J Stanford, Melbourn, and Mr Elbourn, Meldreth, (these words did for our forefathers). We expect the fire engine is still within those four walls. Now this is what the Melbourn people are asking themselves. “Where are our firemen,” and if there are any, who are they? The last fire at Meldreth is still smouldering in our readers’ minds.  Those who attended it could not help noticing the confusion which reigned around our engine, for nearly everyone wanted to take hold of the bumpers, with the result a good many valuable minutes were lost. Now what the Melbourn people want is a well organised Fire Brigade which will cope with any emergency. There are a number of young men who would give their services under a good captain, would, I know, attend drills, and the Brigade would be a credit to the village. “Wake up Melbourn,” for if you do not you will have a bitter awakening, when the ugly truth will gleam upon your mind, that you are behind the times.

Sir – In your issue of Friday last an anonymous correspondent, after stating that the German Invasion scare had made some people nervous, goes on to say that some of the Melbourn people slept uncomfortably in their beds, fearing that they would be burned up on some dark night. He then went on to refer to the Fire Engine, and inquires if there are any firemen. For the information of this correspondent, and the public generally, I give the names and addresses of the Melbourn and Meldreth Fire Brigade: Captain, J J Newling, The Moor; Engineer, Joseph Stanford; Brigade – James Stanford, near the church; Walter Handscomb, near the church; William Chapman, Dolphin Lane; John Adams, Little Lane; Joel Cooper, Mortlock Street; Charles Holland, Mortlock Street; Joseph Day, near the Red Lion; George Harper, High Street; Ernest Chapman, High Street; Walter Wing, High Street; Ralph Day, The Moor; Thomas Taylor, The Moor; and John Worland, Back Street.

If your correspondent will call upon the Engineer, Mr J Stanford, I am sure he will show him that there is not only a Fire Engine in the little house, but also about 300 feet of hose, and all the necessary appliances for extinguishing fire, and also a large Minimax Chemical Fire Extinguisher, charged and ready for immediate use, also a box of chemicals for recharging the Minimax.

[Our correspondent then gives a lengthy statement as to what took place at the Meldreth fire, a statement which is too lengthy for us to print.]

In the 20 years which I have managed the Brigade, the people of Melbourn and Meldreth have always done all they could to assist the Brigade in extinguishing a fire, but I would like to take this opportunity to request that all persons not connected with the Brigade will refrain from interfering with hose or pipes, if there should be another fire. With regard to the pumping of the engine, the Brigade require help, as it takes 20 men to work the engine up to full pressure, and extra men are paid sixpence per hour when pumping.

Sir, I thank Mr Newling for his courteous reply to my questions, and am pleased to know we have a Brigade. I am sure we all appreciate Capt. Newling’s twenty years of service, still we cannot close our eyes to the fact that younger blood is needed, the very names of the Brigade reveal that fact.  I do not wish to suggest to Mr Newling that he is too old for his post, for I think a man with his experience should be a help to any Brigade.  There are always two sides to a question. Mr Newling says that it takes 20 men to keep the engine at full pressure, and that he is glad of voluntary help, so I should like to know why does not Mr Newling enlist the services of more men, then drill these into a discipline which would prevent further chaos. A further remark of Mr Newling’s is “the hose question”. I will take his word respecting the specified length of hose, but he does not say how many feet of the 300 is in good serviceable order.

In concluding I do not wish to disparage any person or persons who have given their services to this Brigade, but I venture to suggest to Melbourn and its joint parish Meldreth that this Brigade is yours, and the only one you possess, and it is to your interest and credit to help in improving it and bringing it up-to-date.

* It is possible that the 1910 fire was the one that destroyed Flambard’s Mill, but to date we have been unable to find any evidence to confirm this.