You are here: HomenextTopicsnextTragediesnextMurder at The GablesnextFrank's First Court Appearance 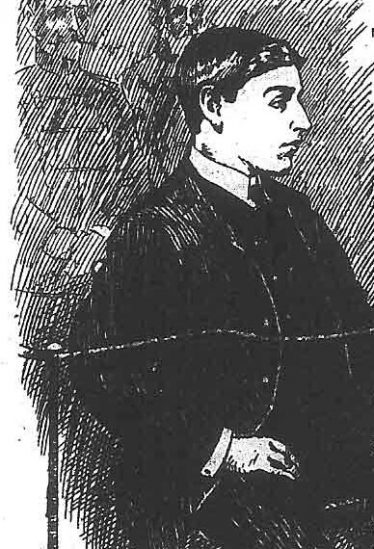 The Herts and Cambs Reporter and Royston Crow carried the following report of Frank Rodgers’ appearance in court:

The Prisoner in Court

Yesterday, (Thursday), morning the accused was brought up at the Melbourn Police Court before D.B. Balding, Esq., (in the chair) and A.R. Fordham, Esq.

The prisoner who was wearing a dark serge suit, is a fairly well proportioned lad with almost black hair, a low and receding forehead, a pale complexion, and somewhat protruding lips, which gives at times a morose and sullen expression.  He is of medium height and gentlemanly appearance.  He was brought into Court by P.C. Salmon and a constable.  His head was bowed but from under black straight eyebrows the eyes appeared to flash defiance as they were raised for a moment.  When he reached the dock he place his hands on the rail and drew himself upright, and raising his head appeared to be taking in the dimensions of the Court room.  After a brief survey, the chin sank to the breast again and remained so during the rest of the hearing.  To the usual questions from the Bench as to whether he had any questions to ask the witnesses, the eyes were simply raised for a moment and prisoner replied in a low voice “No thank you”.

Prisoner was charged with that on 12th April feloniously, willfully and of his malice aforethought, he did kill and murder one Georgina Rodgers by shooting her with a revolver.  Prisoner made no reply to the charge.

Winifred Rodgers, a sister of the prisoner, said:  I live at The Gables, Meldreth, the prisoner is my brother.  On Tuesday last 12th April, I was at home from half-past four until seven in the evening.  I then went down to Mrs. Medlock’s with my brother, Frank.  We returned together about 8 o’clock and went into the breakfast room and had supper.  My mother and my sister Georgina Marion (we call her Queenie), were also there.  After we had supper my brother left the room and I went into the drawing room with my sister, leaving my mother in the room by herself.  About 10 minutes after I had been in the drawing room my brother came in.  He had a revolver in his hand.  He said “I have shot  her, I think it’s for the best”.  I wanted to go to her but my brother said “Stay here, someone had better fetch the doctor”.  I said “I will go” but he said “No, I will go.  I want to see Dr. Ennion”, but eventually I went out for the doctor and my brother went with me as far as the gate where I left him.  I came back with Dr. Ennion, and my brother was still at the gate.  I saw him later at Mrs. Thurley’s.  I said “Why did you do it?”.  He replied “It is for Queenie’s sake, she cannot live the life she has for the past two years”.

Dr. Ennion, a medical practitioner, residing near The Gables said:  On Tuesday last, about 9 o’clock in the evening, the last witness came to my house, and in consequence of what she said I went at once with her to The Gables.  I saw the prisoner in the kitchen, and he said “I have done it”.  I did not put any questions to him.  I then went into the hall where I found the deceased woman.  I have attended her professionally.  She was lying at the foot of a couch with her head resting on the edge of the foot of the couch, with her arm extended above her head in a natural manner.  I made a cursory examination at the time and found a wound in the neck and a large quantity of blood on the floor.  I left her and did not touch her.  I went into the kitchen again and said to the prisoner “have you the revolver?”.  Prisoner then took a revolver out of his right hand coat pocket and handed it to me.  I gave information to the police and handed them the revolver.

P.C. Charles Salmon said :  On Tuesday last about 9.15 p.m. Dr. Ennion came to the Police Station and handed me the revolver now produced and in consequence of what he said I went with Dr. Ennion to The Gables.  I saw deceased lying in the hall.  I afterwards went to the “British Queen” about 10.20.  I saw the prisoner and said to him “are you Frank Rodgers?”.  He said “yes”.  I said “I am going to take you into custody on the charge of killing your mother by shooting her”.  I also said “It is my duty to caution you, you need not say anything unless you like, but whatever you say will be taken down in writing and given in evidence against you”.  The prisoner made no reply.  I then conveyed him to the station.  He had since examined the revolver and found all the chambers were empty.

Supt. Wilderspin said that was all the evidence they proposed to offer, and he would ask for a remand for eight days until the 21st., and then for a further remand until the next Melbourn Petty Sessions, which are held on 25th April.

The application for the remand was granted.