You are here: HomenextPeoplenextFuneralsnextThe Funeral of Georgina Rodgers

The Funeral of Georgina Rodgers 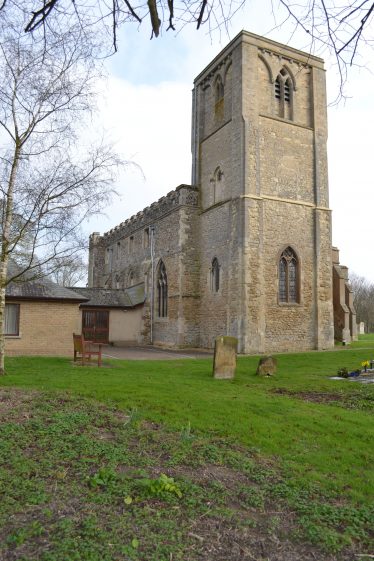 zoom
The north side of Holy Trinity Church where Georgina Rodgers was buried
Photograph by Kathryn Betts, March 2011

The following report appeared in the Herts and Cambs Reporter and Royston Crow:

The Meldreth Tragedy – Funeral of the Victim


On Saturday last [16th April] the curtain fell upon another act in the Meldreth tragedy.  The scene, a village churchyard with the little church dating back to the twelfth century and a silent waiting crowd of somewhere about 200 villagers and others from the neighbourhood.  The shadow on the old sundial is creeping past the figure three as a hearse and two mourning coaches draw up at the entrance gate.  The coffin, brass mounted and of polished oak, is covered with many wreaths of choice flowers.  When the sonorous voice of the Rev. P. Harvey, vicar of the parish, is heard repeating those words of hope, “I am the resurrection and the life,” and the bearers move on, followed by the husband and his daughter Winifred, his son Willie, Mr. Robert Rodgers, Mr. J.W. Rodgers (brothers), Miss Kittie Rodgers, (niece), and Miss Georgina Robson.  They enter the sacred building and a number crowd in and nearly fill the little church.  The service is impressively conducted and the procession again emerges into the bright April sunshine and by a rather circuitous route wound its way by the east end to the north side of the Church, in what appears the most secluded and gloomy part of God’s acre.  Here in what was once part of the Old Vicarage garden and under the shade of an ancient yew, and so close to it that its roots have been cut through to allow the plain seven feet grave to be dug, is left all that remains of her who should under brighter circumstances have been looking forward to many years of happiness in the joy of seeing her children growing up around her.

The inscription on the coffin was


The sympathy of the whole neighbourhood appears to be with young Frank Rodgers, who it is thought, brooded over the unhappy conditions of things at The Gables and in this state of mind committed the terrible deed, perhaps feeling prepared to suffer himself for the sake of his little sister Queenie and the rest of the family, or perhaps not giving a thought to the consequences of his rash act.

It is stated that Mr. Rodgers, senr, has received from his son whilst in Cambridge Gaol, most affectionate letters, but in them he refrains from mentioning the recent occurrences.  Indeed on the events of that dreadful Tuesday the boy’s mind appears to be a perfect blank.


On Saturday a number of cyclists and others, some with cameras, visited the scene of the tragedy, and on Sunday, many hundreds passed through the village.  Carriers’ carts brought large numbers from the surrounding villages, and at one time as many as 20 bicycles were seen standing outside the now famous “British Queen”.