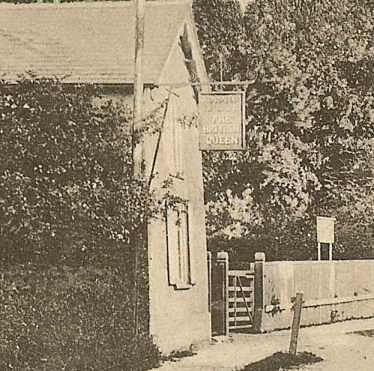 The inquest was held two days after the murder, on Thursday 14th April 1904.  It was reported in the Herts and Cambs Reporter and Royston Crow the following day:

On Thursday (yesterday) afternoon the little room at the British Queen at Meldreth, was filled to its utmost capacity with the jury, the officials in charge of the case, and such an army of pressmen as were never seen in the district before.  There were representatives of all the local papers in the district and several of the London daily papers and news agencies.

The accused was brought over from Melbourn and sat in a corner wearing an overcoat, the collar of which he kept turned up part of the time.  He was in charge of Supt. Webb.

The inquiry was conducted before Mr. A.J. Lyon, County Coroner, and Supt. Wilderspin watched the case on behalf of the police.


Mr. F. Lowe K.C. said by the courtesy of the Coroner he proposed to attend to watch the case by desire of the father and on behalf of the boy in custody.  At a later stage further light would be thrown on the matter but at present he preferred to remain quiet.

The Coroner:  Certainly, I quite understand.

The first witness called was the father of the accused.

William Alexander Rodgers said:  I live at The Gables, Meldreth, and am a solicitor.  The deceased was my wife and her name is Georgina Rodgers, her age is 42 years.  I was in London when this occurred.

Winifed Rodgers said:  I live at The Gables, Meldreth.  The deceased was my mother.  On the night of the 12th April I was at home at 8 p.m. in the breakfast room at supper, and after that I went in the drawing room.  My brother Frank had supper with us, and after supper he went upstairs.  My mother did not partake of supper but sat in an armchair in the same room.  After I had been in the drawing room about 10 minutes my brother Frank came in and said “I have shot her, I think it’s for the best”.  I came out and was going in the breakfast room but he said “No, stay here, someone had better go for the doctor”.  I said “I will go”.  He said “No, I will go, I want to see Dr. Ennion”.  Eventually I went for Dr. Ennion with one of the servants.  He returned with me.  I saw the deceased in the hall.  I only caught a glimpse of her leaning against the sofa.  I think she was dead.  I noticed blood in front of her.  I afterwards saw my brother Frank at Mrs. Thurley’s.  I said to him “Why did you do it?”.  He said “It was for Queenie’s sake, she could not be brought up to the life we have had the last few years”.  When he came into the drawing room he had a revolver in his right hand.


By a juror:  I did not hear any shot.  I was playing the piano at the time.

By the Coroner:  Did you know what your brother meant when he said “I did it for the best?”

Witness:  Yes, I knew what he meant.  The last few years we had lived unhappily.

Coroner:  For what reason?

Witness:  Because my mother had given way to drink.

Dr. Ennion said:  On the night of the 12th April about 9 o’clock, I was called to “The Gables” by the last witness.  I went at once, and upon arrival I saw Frank Rodgers in the kitchen and he said “I have done it”. I then went into the hall and saw the deceased on the floor at the foot of the sofa, with her head resting on the edge of the sofa, the right arm extended on the sofa, she was quite dead.  There was a smell of alcohol about.  I left her and went into the kitchen and asked Frank for the revolver, which he handed to me from the right hand coat pocket.  This I subsequently handed to P.C. Salmon in the condition I received it.  Frank asked if I thought his mother suffered any pain.  The body was removed into the adjoining room where the jury viewed it.  I made a post mortem yesterday afternoon.  The body was well nourished.  There were no other external marks of violence excepting two wounds in the neck, the one on the left side was extended an inch below and half inch in front of junction of  lobe of left ear.  It was a clean wound, no blackening, and no signs of powder or singeing.  On the opposite side of neck two inches below and in a line with the junction of the lower lobe of right ear was another small wound, the edges of which were somewhat jagged, indicating that the bullet had entered on the left side, passing out on the right.  The wounds were such as would be caused by a bullet passing through the neck.  The cause of death was the rupture of the large vessels in the neck.

By Mr. Lowe:  The wounds I speak of were caused by the transit of the bullet.

Following the direction of the wound I searched the room and found the marks of a bullet on the mantle-piece, and also a groove marked with lead, and taking the rebound from there I found some plaster, knocked off the wall, and the bullet just below.  The bullet I now produce, with a piece of the wall paper adhering to it.

By Rev. P. Harvey:  Taking it from the nature of the wound unless the deceased was left handed, and held the weapon in an awkward manner, it would be impossible for the wound to have been self-inflicted, but most improbable.

By another juror:  I cannot tell you if the bullet corresponds with the empty cartridge found in the revolver, I have not examined it.

P.C. Charles Salmon said:  On Tuesday last at 9.15 p.m. I received information from Dr. Ennion and went to “The Gables” with the doctor and I saw the deceased in a crouching position on the floor, and from where she lay there were traces of blood to the breakfast room and to a chair in that room.  I afterwards came across to the British Queen and arrested Frank Rodgers, and conveyed him to the Melbourn Police Station.  I told him I was going to take him into custody for causing the death of his mother by shooting her.  I cautioned him in the usual form, but he said nothing.  I produce a revolver handed to me by Dr. Ennion at 9.15 p.m. on the same evening.  On examining it I found all the chambers empty.  I could not tell if it had been recently fired or not.  I have not searched the house for any cartridges.  I should say the bullet produced would fit the revolver.

By a Juror:  I found no cartridges in the possession of Frank Rodgers when I arrested him.

The Coroner:  Did you search him?

A Juror:   May I ask if an empty cartridge case was in the revolver?


The Coroner said it was now for them to consider their verdict.  The evidence was of such a nature that there could be no doubt death was caused by the course of the bullet as described and they could only come to the conclusion that the revolver was fired by Frank Rodgers.  The law in such cases, until there is evidence to the contrary, assumes that there was homicidal intention.  In this case there has been no evidence submitted to the contrary.

The Rev. P. Harvey (juror):  The doctor has said it is possible for such a wound to have been self-inflicted but improbable.  Why improbable I should like to know.

Dr.  Ennion then described the unnatural position a revolver would have to be held to inflict a wound on the left side.

To a question from the Coroner, he also replied that a revolver fired within two feet would cause blackening or singeing.

The Foreman:  May I ask if it is within the knowledge of any of the family whether the deceased if left-handed?

William George Rodgers, recalled, said as far as he knew his mother was not left-handed.  She wrote with her right hand and used a knife with that hand.


The jury, after a brief deliberation in private, returned a verdict to the effect “That the deceased Georgina Rodgers died on 12 April from injuries received from a bullet discharged at her from a revolver by Frank Rodgers”.

The Coroner:  That is a verdict of willful murder.

Mr. Lowe, K.C., said from the evidence they had heard he thought this was a case for deep commiseration with the relatives.

The Foreman:  Yes, we think so, but there were circumstances which we considered did not call for any remark at these proceedings.

The Coroner:  Oh yes, we quite understand.


After the inquest the police kindly allowed members of the family to converse with the prisoner, and one or two friends were seen to shake him by the hand, and the father was heard thanking Supt. Wilderspin and P.C. Salmon for the kindness and consideration the police had shown the family.


The prisoner was conveyed in a cab by road to Cambridge in charge of Supt. Webb and P.C. Salmon.