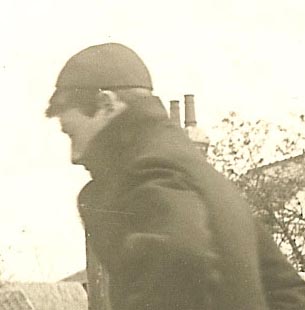 The following report appeared in the Herts and Cambs Reporter and Royston Crow:

The exceedingly sad story of the unhappy boy, Frank Rodgers, who shot his mother at “The Gables”, Meldreth, on April 12th last, came before Mr. Justice Phillimore at the Cambs. Assizes, on Friday last.  A report of the trial and verdict  appeared in our issue of Friday last.


It was clearly shown that the distressing circumstances of his home life so deeply agitated the boy that in the tortured state of his mind, he decided the only course was to take his mother’s life.  The jury found that he was insane at the time of the murder and the judge ordered his detention during his Majesty’s pleasure.


That the boy Frank committed the crime was undisputed, and the evidence of the majority of the witnesses was directed to deciding the question of the state of his mind at the time.


When the judge took his seat all eyes in the crowded court were turned upon the slim, delicate-looking boy who was brought into the dock.  He scarcely looked his age of fifteen and a half years.  His face was pale, and there were dark lines under his eyes, but the boys demeanour in the dock gave little indication that he realized to any extent the terrible nature of the charge hanging over him.  After remaining standing for about ten minutes, he dropped into a chair which had been provided for him, and during the rest of the trial sat with a listless expression on his face.


As showing the complex character of the boy’s nature, Mr. St. John Raikes, who prosecuted on behalf of the Treasury, mentioned that only a few days before the murder of his mother he was at Royston Station, and seeing her attempting to cross the line, at the risk of his life he rushed towards her and swung her into safety when the oncoming engine was within a few yards of her.


Frank had two favourites in the house – his mother and his little sister Queenie.  So much was this the case he was called in the family circle “mother’s boy.”  Up to a few months age he was evidently a bright boy, enjoying games with others of his age, and a rather voracious reader.


Previous to going to reside at Meldreth the family had lived in London, where Mr. Rodgers has a solicitors practice.  The move to the Cambridgeshire village was due to the continued intemperate habits of Mrs Rodgers.  Without doubt Frank felt this very acutely.


His elder sister Winifred stated in her evidence that on the night of April 12th her mother was “not quite herself.”  After supper Miss Rodgers and her little sister Queenie were in the drawing-room when the door was suddenly opened by Frank who had a revolver in his hand.  He said to them, “I have shot her as I think it best.”  A doctor was sent for, but Mrs. Rodgers was found to be dead.


Later in the evening his sister asked Frank why he had shot his mother.  He replied, “I did it for Queenie’s sake.  She could not be brought up to the life we have led for the past few years.”


An elder brother, to whom the revolver belonged with which Mrs. Rodgers was shot, said that Frank had of late acted very strangely. He was always worse when his mother was under the influence of drink.  Frank used to do strange things in his sleep, and one morning at breakfast he told them he had dreamed that he had strangled his mother.

Soon after Mrs. Rodgers had been shot Dr. Ennion, the family medical attendant, saw Frank, who acted in a very unnatural manner, not at all realizing what he had done, and sitting calmly reading a newspaper.  The boy told him that just before he shot his mother he heard a voice telling him to do it quickly.


Dr. Ennion was convinced that the lad’s mind was in such a state that he thought he had done the right thing in shooting his mother – in fact, he made the remark that “it was the only thing to do”.


More light was thrown on the boy’s behaviour after he had killed his mother by Mrs Thurley, a neighbour of the family, who said that after the murder Frank carried his little sister over to her house and asked her to take Queenie in for the night.  In a quiet, composed tone, he added  “There has been a little upset at the house;  I’ve shot mother.” Afterwards he asked for a newspaper, and sat calmly reading until he was arrested.


Most of the witnesses called for the defence by Mr. F. Low, K.C., were asked to give expert medical evidence as to the state of the boy’s mind.


Dr. Percy Smith, formerly superintendent of the Bethlem Hospital, held that Frank Rodgers was insane at the time of the murder, but he would not, he stated in cross-examination, describe the crime as motiveless.  It was not merely an act done on the impulse of the moment, but one which had been considered beforehand.  The result of comparing his unhappy home, with another home where he had been spending the evening was that the impulse to kill came with such imperative force that the boy was unable to resist it.


Other medical men gave similar evidence.  Dr. Rogers, superintendent of the Cambridge County Asylum, proving also that John Robson, the boy’s great uncle, who died at the asylum in 1869, had attempted to murder his father and had threatened others.


This was supplemented by evidence of insanity among other members of the family on the mother’s side.  A brother of the dead woman stated that their father had been a man of intemperate habits.


The jury arrived at their verdict without leaving the box.