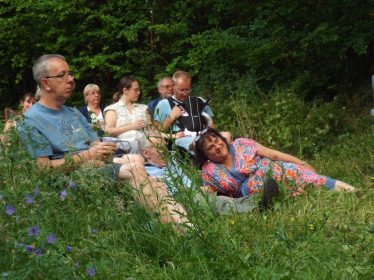 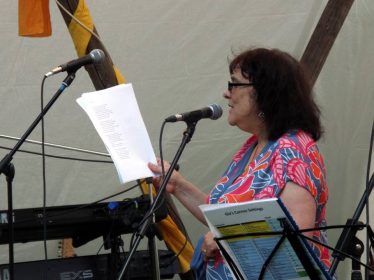 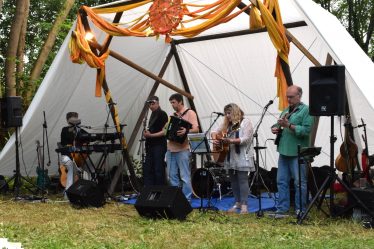 The weather was very kind for the event held in the wood in 2015. On a balmy, late June evening about 50 people, mainly from Meldreth and Melbourn, but with some visitors from as far away as China, settled down on their blankets, spread out their picnics and enjoyed three hours of music and poetry.

The event started with some poems, written and read by local poet Clare Crossman. Further original poems were read by Yvonne Chamberlain, who many will know from her role in the local Post Office, and by J.S. Watts, a poet and novelist who lives in Bassingbourn. The general theme of their work related to the natural world and climate change, which was appropriate for an event in a nature reserve.

The main musical session was by folk rock band CARNAC whose six members performed English and Spanish folk songs with some spectacular instrumental pieces by various members of the group who showed skill on more than one instrument. Brian Causton’s mandolin provided a real taste of summer holidays in warmer climates. Carnac also made good use of the talents of award-winning singer / song writer, Penni Mclaren Walker, who performed some new pieces alongside well-known popular works.

Tony Phillips, a singer song writer and leader of the Cluzion group gave a solo session and acted as compere.

The structures to house the musicians were provided free by Greenstage  run by Tony Phillips linked to the charity Real Life. Greenstages are unique, low cost, low impact structures developed in conjunction with the National Trust at the ancient Hatfield forest in Essex. The basis of the commission was that the frame should be constructed from wood available on the site – typically coppice in the case of the National Trust. With Melwood being only a small area with insufficient long poles for the purpose, Tony brought in the required timber but the construction was no less impressive and used remarkably little wood for the size of area covered. They are used around the country for open air events e.g. the Strawberry fair in Cambridge.

The Conservation Group explained its activities and recruited some new volunteers.