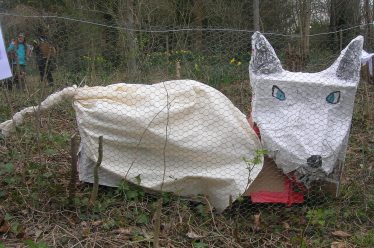 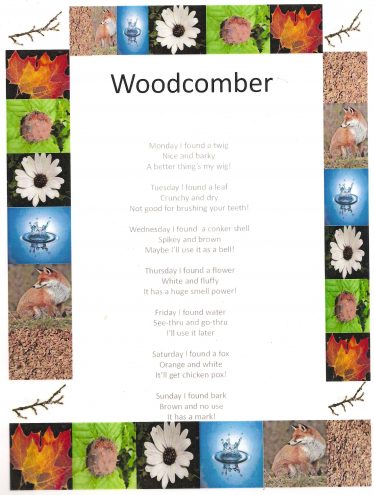 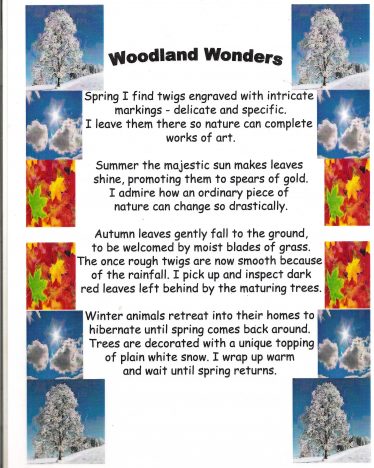 As a Local Nature Reserve Melwood Conservation Group organise community related activities and this is an important part of their Management Plan.

Children from the senior class at the Primary School were given an introduction to the wood at school by a member of the Conservation Group and then provided with sampling bags to collect twigs and leaves for later identification.  When they arrived at the wood they were surprised to find a number of animal sculptures which had been made from “found materials” by the GCSE arts class at Melbourn Village College.  Information sheets provided descriptions of the animals and the environment in which they lived, or had lived (if extinct).

On return to the classroom with their twigs and leaves (and many creepy-crawlies), an animated discussion took place, illustrated with slides, on how the wood might have changed over time as the environment was modified in the Cambridgeshire area.  This included identification of different animals that might have lived there including mammoths, the Dalmatian pelican (common in the fens in the past but now only found in Eastern Europe) and the burbot (a fish also common locally in the past put now only found in other parts of Europe). Some of these creatures were represented in the sculptures.  The discussion continued about other animal sculptures that were found, for example, a monkey and a tropical butterfly with a huge wing span which might possibly live in the wood in the future if the climate gets warmer.

During the week Clare Crossman worked with the class to produce poems on their experiences in the wood and their reaction to environmental change.  These poems were displayed in Melwood and on the following Saturday, 31st of March, members of the local community, parents, siblings and relatives also visited the wood to read the poems and then went to The Tavern Gallery for tea and cakes provided by the Gallery Writers Group.  In the background a video played of members of the writers group reading their poetry in Melwood.  A poetry tree was created by participants.

The afternoon was rounded off with a wider debate on the management of the wood and the impact of environmental change.

This event evolved into a project in four schools in Cambridgeshire under the auspices of the Social Anthropology Department at Cambridge University and funded by the Higher Education Innovation Fund and then an Impact Acceleration Grant.  This further developed into a three year Arts and Humanities Research Council funded project with an added international school interchange component (an interdisciplinary project between Social Anthropology and Education departments at Cambridge University) – a major education project resulting from a humble beginning in Melwood.