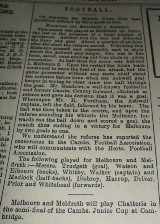 History of Football in Cambridgeshire

The earliest record of football in Cambridgeshire is noted in the Cambridge University records of 1579. We read that a match played at Chesterton between townspeople and University students ended in a violent brawl and caused the Vice-Chancellor to issue a decree forbidding them to play “football” outside of college grounds!  Needless to say, this did not deter the students and townspeople of Cambridge from further matches for we note from later University records that a further decree was issued in 1634 which was not repealed until 1863, the year the Football Association was formed.

This was then the scene: the Laws of the Game had been drawn up by a group of Cambridge University students in 1846 and posted on the trees which surround Parker’s Piece, a park area in the centre of Cambridge. The game in Cambridge became organised and when students, after graduating, returned as teachers to public schools they carried with them the new code and the game became more regularised.

The Cambridge Rules were accepted, with slight modifications by the FA in 1863, but it required a further 17 years to elapse before Cambridgeshire joined the then existing two dozen counties in association with the national body.

Prior to this, quite a number of clubs were in existence within the County – Sawston had three Clubs – Sawston Mill, Rovers and St. Mary’s. In the main, football was played on Parker’s Piece by students rather than townspeople, but gradually in the years preceding 1884 graduates and townsfolk organised clubs so that there were 12 clubs in existence – Albert, Cam, Cassandra, Granta, Old Perseans, Perse School, Printers, Rovers, Newmarket, Linton, Sawston and Swifts. The town Clubs were composed mainly of University graduates and middle class townspeople!

Towards the end of that year a meeting of secretaries and captains was held by Mr. (later Rev.) F.B. Westcott’s rooms in Trinity College, where it was decided to form an Association and the Mayor of Cambridge explained the objects of the Association as: “To develop the game which showed signs of a splendid consummation someday”.

How true were those words which were to mark the birth of the Cambridgeshire Football Association!

With kind permission of Cambridgeshire F. A.

Football in Meldreth and Melbourn

In 1915 the Cambridge Independent Press published an obituary of Mr Butteau formerly of the Retreat Melbourn. He was reported to be the founder of the Melbourn and Meldreth Football Club.

Cambridge Independent Press reported that the Melbourn and Meldreth Football Team received a visit from the Cambridge Beehives yesterday (Thursday afternoon) and was successful by 4 goals to 2.

The Royston Crow reported as follows:

Cambridge Independent Press reported on a successful past season of Melbourn and Meldreth District Football Club.  “Various changes have been made and it is hoped it will enhance the Club’s chances of obtaining the honour they have coveted for the past two years in the Cambs. Junior Cup.  In both years they reached the semi-final, missing the final by a narrow margin.”

The Royston Crow reported on the match between Melbourn and District v Chatteris.  Chatteris won 2-1.

It appears that both these matches were controversial.  In the match against Ashwell the Ashwell captain left the field followed by his team in protest against the referee’s decision to award an own goa.  The referee then signalled Meldreth to continue and the forwards ran down the pitch scoring another goal, bringing the final result to 2-1 in Melbourn and Meldreth’s favour.

In the match against Chatteris, despite the report stating that the match was played in “good temper”, it was also reported that a protest had been made against several of the Chatteris team although no reason was given in the report.

Meldreth Football Club formed in 1921 and initially played on land next to Meldreth Railway Station. The earliest mentions of the Club are in two issues of the Royston Crow, reporting on matches that took place in October and November 1921.

FOOTBALL – Meldreth were at home to Thriplow on Saturday last in a friendly match, the visitors winning very easily by 7 to 0. Meldreth will be at home to Barley on Saturday.
Royston Crow, 18th November 1921

The first annual meeting was held in July and was reported in the Royston Crow.

FOOTBALL CLUB –  The first annual meeting was held at the Hall, High Street, Meldreth on Monday 3rd July, when the Hon. Sec. and Treas. presented his report and balance sheet. Mr. Alwyne Howard was in the chair. There was a good number present and the report was adopted. The balance showed a credit of £3 14s. 2d. and club property to the value of £9 8s. 5d. Matches won 7 lost 12, drawn 3 Total 22.

Selection Committee Messrs C. Walby and T. Rumble. The chairman was thanked for his services during the past year, likewise the Hon. Sec. and Treas., Committee and other officers. The club is looking forward to a good season, and trusts the Hon. Secretaries of surrounding clubs will forward their open dates at the earliest opportunity, which will receive the attention of their Secretary.
Royston Crow, 14th July 1922

In August, it was reported that the club had lost its home ground.

It is very much regretted that the Football Club of the above village [Meldreth] should lapse for want of a ground for matches and practice, Mr. George Palmer, Sheen Farm, who kindly lent the meadow adjoining the station last season, cannot see his way clear to do so this coming winter. It is a great pity, for the Club was in good working order and financially strong, and gave great pleasure to players and spectators alike besides assisting in charitable objects.
Royston Crow, 18th August 1922

However, in October Mr Charles Harrup came to the rescue, offering a new ground near Bury Lane.

THE FOOTBALL CLUB.  Mr Charles Harrup of Chiswick End Meldreth has kindly offered the Football Club a meadow adjoining Bury Lane, for their matches, and the Club wish to record their sincere thanks to Mr Harrup for his kindness. After the excellent start made last year it would have been hard lines if the Club had had to disband for lack of a playing field. The Club are now prepared to fix up matches with neighbouring clubs.
Royston Crow, 6th October 1922

1922 did not end well for the Club, however, when George Farnham suffered a broken leg in their match on Christmas Day.

FOOTBALL– The Charity match for Addenbrooke’s Hospital on Christmas morning was abandoned after the sad accident to George Farnham, of Meldreth, who had his leg broken in two places. First aid was rendered by Sergeant Martin and Farnham was then conveyed to Addenbrooke’s in Mr. A. R. Fordham’s motor. We are glad to hear that he is progressing as well as can be expected.
Royston Crow, 29th December 1922