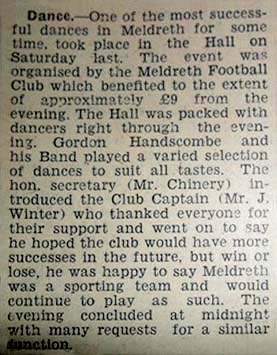 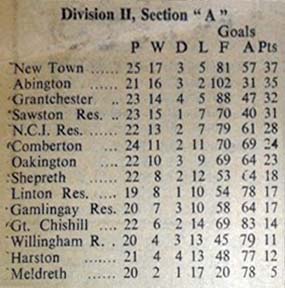 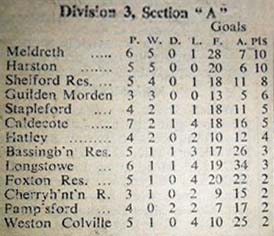 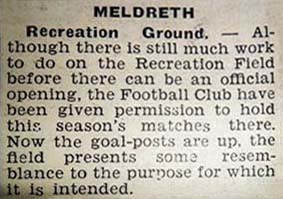 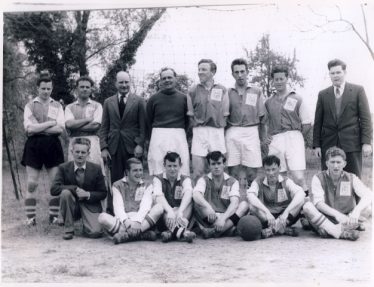 The Club had a fairly poor year, coming third from bottom in League Division II at the end of the season. However, their 3-0 win against Abington on 26 March saved them from relegation. The match was reported in the Royston Crow as follows:

On Saturday Abington were entertained at Meldreth in what might be termed the relegation battle as only three points separated the clubs with Abington at the foot of the table with a game in hand.

This game turned out to be quite good, both defences being determined to keep the respective forwards at bay at all costs, both goals being visited in turn but neither keeper had any difficulty in saving shots that were directed at goal, and so the dire struggle went on at a very fast pace with a lively ball until the whistle went for the breather with no score.

The second half saw Meldreth more prominent and gradually they took command of the situation and did most of the attacking but still the Abington defence stood up to the lively forwards who by this time realised that the Abington rearguard was tiring fast, so they threw everything into attack being ably supported by their half-backs and with eight minutes left for play Jacklin put Martin away on the right and he scored neatly after selling the Abington defence the dummy. Straight from the kick-off Meldreth again attacked and Howell found the ball at his feet with his back to the goal and he hooked the ball over his head past the astonished keeper into the net. Meldreth’s third goal came as quick as the second, when the left winger crossed the ball which struck the underside of the bar and came to rest in the back of the net. Final score: Meldreth 3 Abington 0

A very successful dance was held on 10 March to raise funds for the club and in his speech, the captain, Mr J Winter emphasised the enthusiasm and sporting nature of the Club.  (See photo1)

Very little was reported on Meldreth matches in the Royston Crow during the 1951/52 season. This was probably due to the poor results of the team. The end of the year league results showed that Meldreth won only 2 of the 20 matches they played, putting them at the bottom  of Division 2.    (See photo 2)

When the team resumed playing at the beginning of the 1952/53 season it is clear that they had been relegated to Division 3. However, they start the season very successfully winning their first match against Stapleford 3 – 2.  They then continued to play well throughout the year, ending the season at the top of their league. (See photo 3)

The team continued to play well during the 1953/54 season. Although work on the new recreation ground was not completely finished and had not been officially opened, the team had permission to start playing matches here. (See photo 4)

Although there were no league tables published in the Crow during the 1954/55 season, it was apparent from reports of matches that the team was continuing to play well.  J Howell was excellent in the match played on 29 April 1955, scoring all six goals for Meldreth against Pest Control reserves.

HOWELL GETS SIX FOR MELDRETH

On Saturday Meldreth entertained Pest Control and a feature of the game was that all the home team’s goals came from centre-forward J Howell.

The game was played at a very fast pace throughout with Meldreth prominent from the start. After some ten minutes sustained pressure J Howell netted for Meldreth but the point was disallowed for a handling offence. This did not deter the home team who continued to harass the visiting defence. This, however, soon brought its reward when Howell went through and netted.

Pest Control then came more into the picture but the home defence was equal to anything that came their way. Howell again went close, heading against the upright from a Standon corner. Just before half-time Howell increased Meldreth’s lead from a nice cross from A Chamberlain.

In the second period, Pest Control attacked strongly and very soon rewarded when the Meldreth defence were caught on the wrong foot. J Howell soon restored the lead however heading in a cross from Waldock and within five minutes Howell added number four for Meldreth.

Little was seen of the Pest Control attack after this and Howell netted two more to make the final score 6-1.

Match results were fairly mixed during the 1955/56 season with Meldreth winning a good percentage of games, although there were still no league tables published in the Crow for Cambridge divisions.

The team was also struggling financially as it was reported at the AGM that they had considered disbanding due to financial problems, especially the cost of transport to away matches. However, after a long discussion they agreed to carry on for the following season and officers were elected. A report of the meeting appeared in the Royston Crow on 6 June 1956.

A meeting called to decide whether Meldreth Football Club could continue to exist was very well attended. It took place in the Hall on Wednesday June 6th and after a very long discussion it was decided that the Football Club should continue for the forthcoming season.

It was agreed that the Club needed more local support and interest for the successful running of it. The Treasurer, Mr D Barnes gave his report for the past season and stated that the Club was slightly in debt for the first time since its re-formation eight years’ ago. The main outlay was transport which this year cost £45.

During the 1957/58 season very little was reported on South Cambs football matches in the Royston Crow. There is one report in the Crow dated 13 November of a match between Meldreth and Melbourn Reserves where Meldreth won by 4 goals to 1. It is presumed therefore that the team was playing matches during that time. There were also no reports of league positions for the South Cambs. Leagues during that time.

Melbourn Reserves did not show the same form against Meldreth on Saturday as they did the previous week. Meldreth were quicker on the ball whereas Melbourn waited for it. Meldreth were the first to score but a few minutes later Melbourn were on level terms when the Meldreth keeper dropped the ball and J Ingrey was on the spot to put it into the net. This goal seemed to put new life into Melbourn but Meldreth were still playing good football and ten minutes from the interval scored their second goal.

In the second half Meldreth had the wind behind them and they took advantage of this, their half backs clearing the ball well up the field for the forwards to run on to and if their centre-forward had not fallen into the offside trap too many times they might have scored more goals. They did score two more goals to make them good winters by four goals to one.

There were only two matches reported in the Royston Crow throughout the 1958/59 season and in both matches Meldreth suffered heavy defeats.  They lost 5-1 to Sawston as reported on 26 September and 6-1 to Melbourn as reported on 17 October.

The final meeting of the Pavilion Committee was held during August 1958 when it was reported that the pavilion had been completed for use by all Meldreth sports clubs.

Meldreth were not playing well at the end of 1959. Out of five matches reported in the Crow only one resulted in a win for Meldreth when they beat Chesterton Reserves 5-4 as reported on 13 November (See below).  In the reports of their defeats in the other matches the team was accused of “weak shooting” and “needing shooting practice”. (See photo 5)

This game at Meldreth on Saturday was dominated in the first half by the home side and in the second by the visitors.

Meldreth forced the pace from the start and J. Howell had two near misses. However, J May opened the scoring when he outstripped the visitors’ defence. Soon after, T Harland scored from a penalty.

Croxton came into the picture with a near miss from a free kick and their very small inside right was prominent. However, it was Meldreth who went further ahead with a near header by J May from a left wing cross. Croxton scored their first goal soon after when the Meldreth defence was slow to clear, but just before half time J may completed his hat trick from close in and J Sims hit a good left foot shot into the net.

It was a different tale in the second half. With Croxton improving and Meldreth slow in the tackle, the visitors soon scored, although Jones got his fingers to it. They continued to force the pace and scored again off a post.  Meldreth should have scored on two occasions but failed to swing the ball about, especially to the left wing. Meldreth were hard put to save the points when Croxton scored their fourth. But a good clean game resulted in a Meldreth win.

There were no reports of the Cambs. League Tables in the Crow so it was unclear as to Meldreth’s position at the end of the year but it was unlikely that they were near the top.

With thanks to the Royston Crow and Royston Museum for allowing us to use this information.