The River Mel and the Local Economy

The Mel played a crucial part in the economic viability of the area.

Agriculture, both arable and grazing, was dependent on well irrigated but not waterlogged soil. Water meadows also played an important role in ensuring the fertility of the land and preventing the ground from freezing (because the water was at a constant 10 degrees at the source and hence warmer than the land).

Milling was totally dependent on a healthy river flow and the mill owners would have been keen to ensure the flow was strong enough to drive the mill wheels at several mills.

Osier willows were, for a while, a minor local business.

The making of alcoholic beverages is also dependent on a good supply of water and this would have been part of every day village life from an early date.

From a more mundane point of view the river would have been an essential source of water for bathing, washing clothes, cooking and cleaning before the arrival of piped water (although there were also several springs and wells in the village).

There was therefore a vested interest within the community to keep the river course clear of debris, flowing fast and maintained within its banks.

Agriculture and watering of animals would have been dependent on water from the Mel, wells and associated springs. In the Middle ages sheep were an important part of the economy and would have been common in the land around the village and most families would have kept a pig. Later farming became more arable, although cows and horses are still grazed around the village. Cows used to go from fields across the corner at Station Road (a respondent’s step father owned the land) to Sheene farm dairy.  People who still live in the village remember cows going to drink in the Mel and then returning to Sheene farm along Cowslip corner (the polite name !) by Sheene Mill.

We were given an account of a cow from the field by Topcliffe Mill who found its way across the Mel into the garden of a house on the High Street.  A roofer spotted it (as someone said ”it’s lucky he didn’t fall off the roof with the surprise”!) and drove it back into the field. The house owner said “Luckily it didn’t fall into the artificial pond in the garden as it would never have got out and the pond would have been destroyed”

In the 16th century water meadows were introduced into English agriculture and there were some along the Mel. Some fields, e.g. “the Meads”, near where the station now is, were only suitable for cattle and horses because they were too wet for crops until the draining for the bypass.

For a period in the nineteenth and twentieth centuries some of the land alongside the river was orchards and these would have been watered from the river.

Flooding and waterlogging was a problem which was documented from the 1930s partially due to the lack of maintenance of the whole set of drains, ditches and the banks of the river. The effect on agricultural land was of particular concern during the second world war when food was in scarce supply and agricultural land needed to be maximised.

There was also a suggestion in in the 1950s that if the river were narrowed at points along its length then more agricultural land would become available.

There were eight in Meldreth mentioned in the Domesday Book in 1086. There was only one in Melbourn (likely to have been where Sheene Mill is now) as there probably would not have been sufficient head of water so close to the source to drive more mills. The number of mills may have related to the number of millstones operated rather than the number of buildings.

Most of the early mills would have been small wooden structures, like those I have seen in Nepal and Tibet, as the quantity of grain would not have been very large from the local harvest.  They were owned by the lords of the manor or ecclesiastical authorities and the “common” people would be charged to use them and also often be required to give a proportion of their grain to “The Lord”. Use of the mills features in the Topcliffe manorial records.

There may have been six mills in the thirteenth and fourteenth centuries.

A Church Mill is recorded from the late fourteenth century until 1438 (Victoria County History and Topcliffe manorial records). This may have been the one (a quarter) held by Ralph FitzWilliam on behalf of the Prior of Ely. We have a suspicion of where it might have been located (in the north of the parish on the stream east of the church) and hope to do some test pitting to verify if our guess is right. Other mill names appearing in the 14th century manorial court rolls are Cagewyns, Hale (various spellings) and Le Dam.

In 1720 there were three mills remaining. These were Topcliffe, Flambards and Sheene.

Topcliffe was recorded as operating until the 1940s. However it was ruinous by 1942. It has now been extremely well restored with detailed descriptions of its history and mode of operation. It is sometimes open for viewing. It was called “Third Mill” in correspondence in 1947.

Flambards became a corn steam mill and there are records of its sale in 1879. It had ceased working by 1900 and burnt down in the early twentieth century. It was recorded as Burnt Mill (or Quaker’s/Sheldrick’s Mill) in 1947. We have an account of children playing in the disused mill in the 1950s, taking slates off the roof and throwing them around when it was owned by Colonel Ord.

All the wheels and facing plates were removed in 1942 under the Agriculture (Miscellaneous War Provisions) Act.

More information is available on Watermills in Meldreth.

In other villages in Cambridgeshire there was a strict priority of which mill had the priority for grinding, normally related to the status of the manors in the locality. We haven’t yet found any records of similar arrangements in Meldreth but I think that it was unlikely that there weren’t occasional disagreements.

Any scale of brewing requires water and often this would have been sourced from the Mel.

Small scale brewing (without hops), either for personal consumption or sale, was common in the early middle ages. Slightly larger operations were termed alehouses and were traditionally run by women know as brewsters or ale wives. They would show when they had ale available by placing a broom over the door. By the seventh century the practice had become so common that the number had to be restricted.

The quality of ale provided in the village was an important issue in the Topcliffe manorial court records. Ale Taster page.

The practice continued with the introduction of hopped beer and there were maltsters in Meldreth throughout the nineteenth century. There was a particularly significant increase in beer houses during the period 1830 to 1869 when there was no beer tax. A large number of the properties on Dolphin Lane in Melbourn (by the Mel) were such beer houses selling from their front windows. Perhaps it is no coincidence that there was a temperance inclined Methodist chapel here which was later taken over by the Salvation Army.

Although not on the Mel, Jarman’s Brewery (built in the 1880s), situated in what is now Brewery Lane, would have been dependent on local water sources. It ceased brewing in 1924.

Osier (young willow) trees are mention in the 1798 account of the Melbourn beating of the bounds. These were described as “Mr Fisher’s Osseys” (sic).  Scollops Willows are also mentioned as well as other willows near the Moore (sic). Later Thatcher Stanford had osier beds near the Moor in Melbourn as the willow is used for decoration on thatched roofs.

There are also pollared willows towards Guilden brook. It is not known if they were grown commercially.

It was also used for weaving baskets for the large amounts of fruit grown in the vicinity. Baskets were made at a house on Stone Lane, the willow coming from Broids common (broids maybe linked to embroidery).

Willow was also supplied to Grays in Cambridge (now Gray-Nicholls) for use for cricket bats. Commercial willow planting is still in place north west of Dolphin Lane towards the A10 and a crop was harvested in the autumn of 2018.

Unfortunately the osier beds, which used to help prevent flooding, are now acerbating the problems of water extraction and possibly contributing to the lower water levels recently.

We know about the existence of the water meadows and osier beds because correspondence in the 1950s indicates that the closure of the mills and the loss of the osier beds and water meadows contributed to flooding by Sheene Mill.

A plantation on Station Road towards Meldreth was recently felled as the trees were vulnerable to high winds.  The plantation was of Italian alders and poplars.  The plantation had been planted at the time the A10 bypass was built around 1987 as a baffle for Sheene Manor.  The ground is very wet and only certain species did well.  Very hard woods were not successful as the alders and poplars grew very fast around them.  The process of obtaining permission for felling was long and protracted.

There were possibly watercress beds between two branches of the Mel near the source towards Bury Farm.

People also used the river water for washing and drinking until piped water arrived in 1924. Piped water wasn’t applauded by all and was opposed by the prominent resident Mr Hubert Ellis who said “It’s not going to end here, it will be a ‘Sewage Farm’ next” – and he was quite right! In 1939 Meldreth ratepayers objected to a new water extension scheme as everybody would pay an extra rate, whether they used the water or not. As there were 39 artesian springs in the village it was felt that there was no need for this scheme. In 1941 it was reported in the Cambridge press that Meldreth public water supply was unfit to drink.

In fact piped water wasn’t installed into all the houses in the village until much later. John Gipson was delighted with his cold water tap installed in 1953 in one of the cottages which are now 72 High Street. He was very pleased that he didn’t have carry the water any longer from the pump which was where Bell Close is now.

Melbourn Bury had a well. There was a circular pathway around the well for a donkey to walk around and pull the water up. There was also a horse pond near the stables.

We recently heard an account of someone still washing her clothes in the Mel in the 1970s.  A local resident has now told us that this was Mrs Hunt and the washing was done on the stretch of the River, or a side stream, by Bury Lane.

There was a steam laundry operating in 1901 run by Mr Edwin Hope, near what is now Esse. Presumably this would also have been dependent on Mel water as was the earlier gas works which was still operating in 1904. Mr Hope also had planned to provide a water supply to Melbourn and Meldreth, possibly from a bore hole near Muncey’s farm in Melbourn. Victoria County History indicates that a supply was provided but we have only found evidence of his plans. 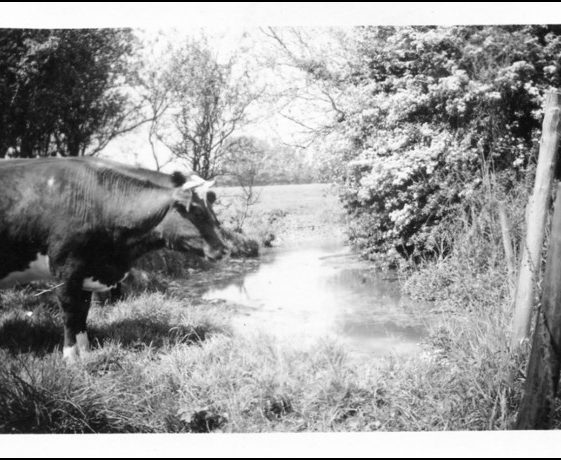 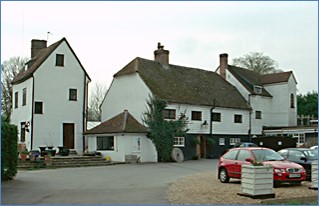 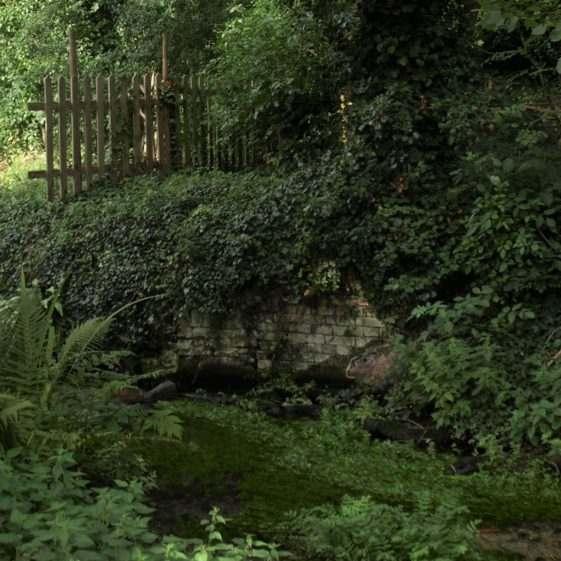 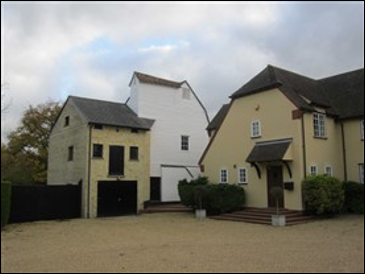 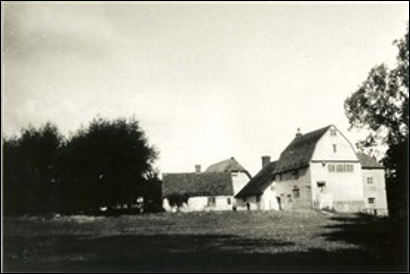 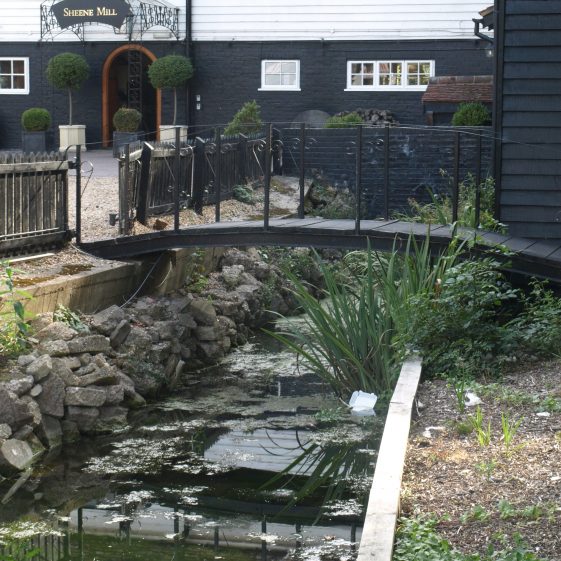 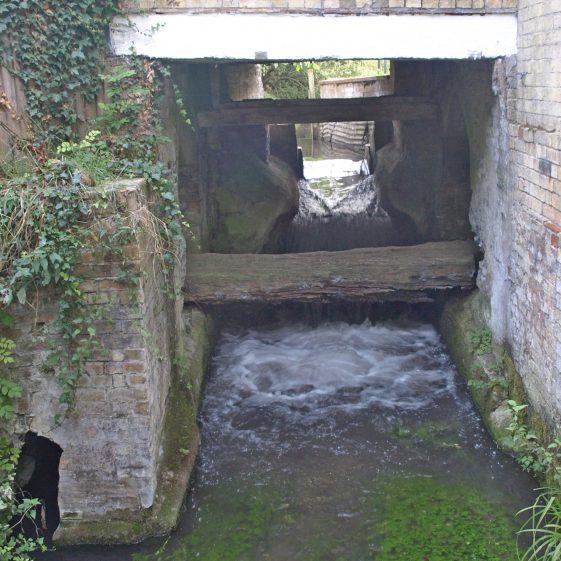 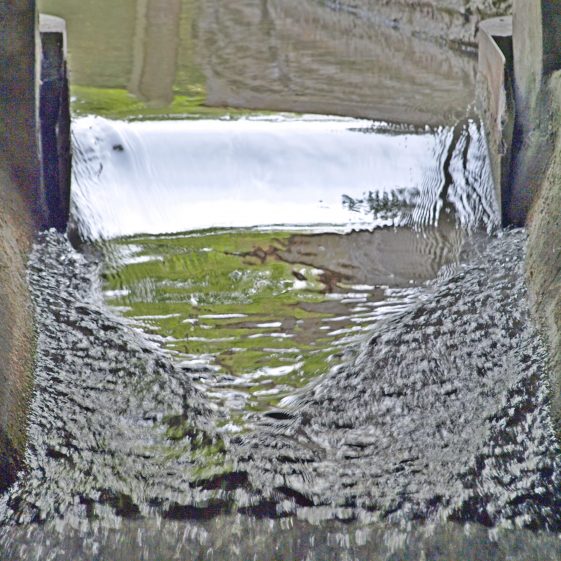 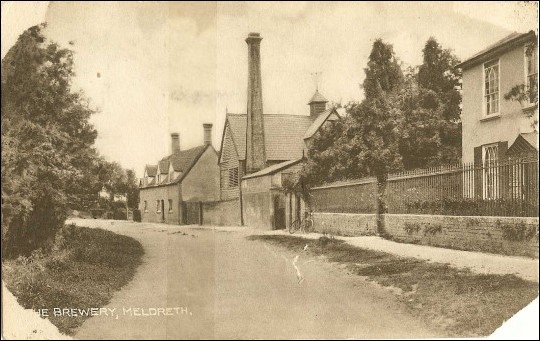 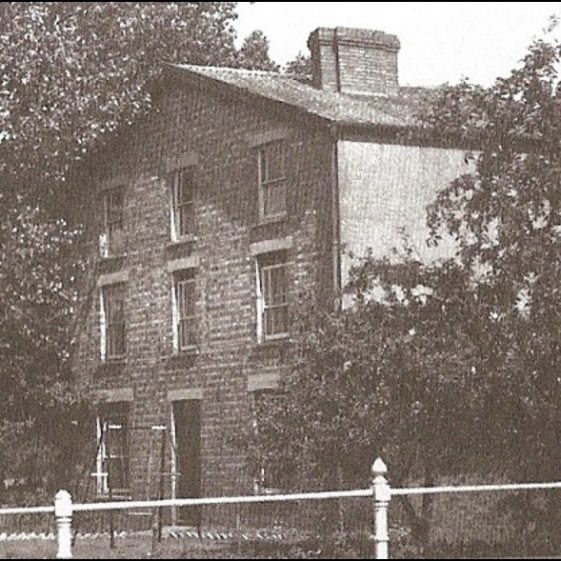 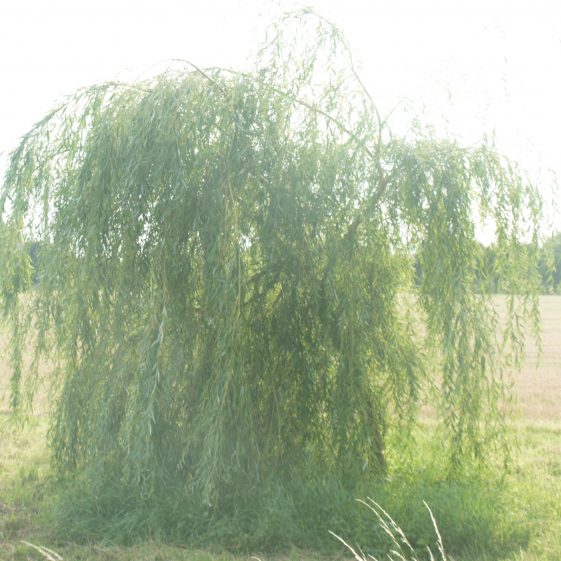 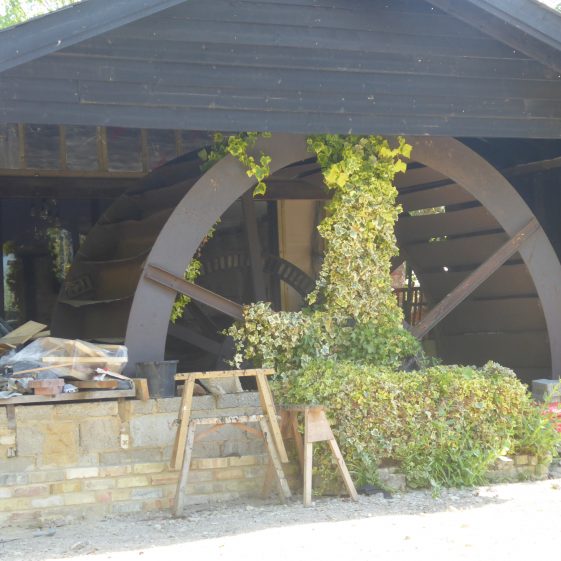 Water Wheel at Shepreth Mill on the A10
Bruce Huett 2019 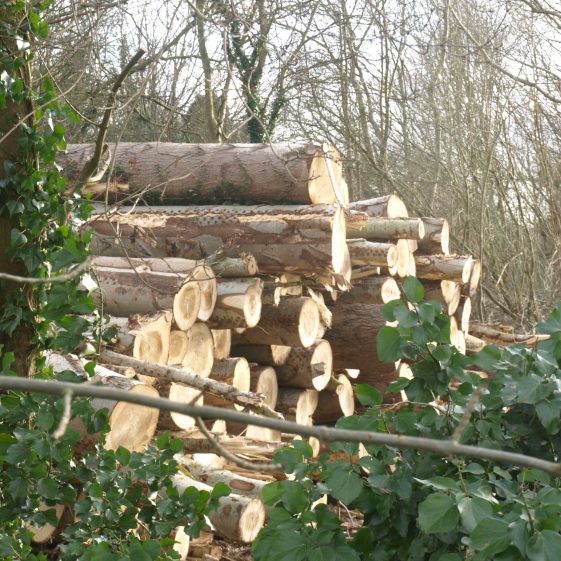 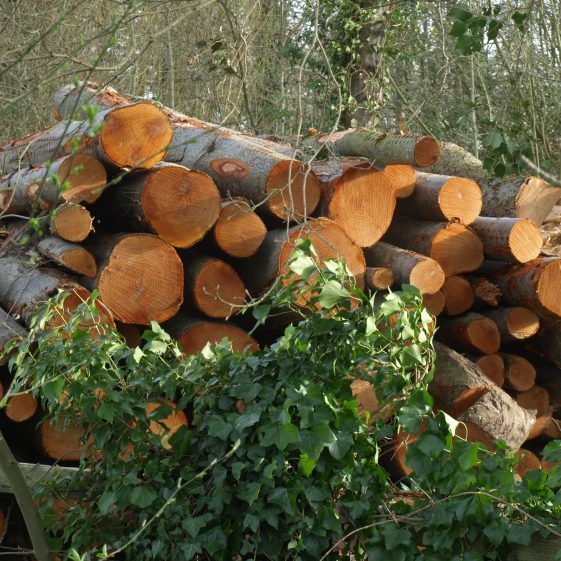 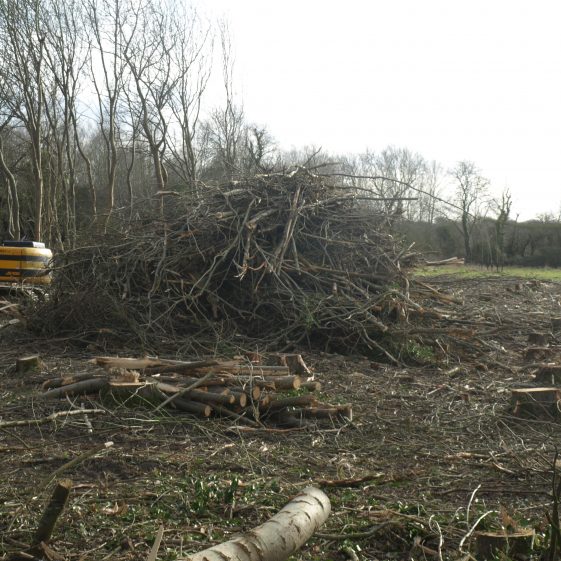