Messing Around in the River

In 2018, local residents shared their experiences of the River Mel when they were children and a described a river that was surrounded by more activity than it is now. Chris Duguid exclaimed “this was our playground”!  She remembered groups of up to twelve children playing in the river together, especially around “Sheldricks” (Flambards Mill). They would also swim at the British Queen and swing across the river on a rope. Ken Winter has written about his memories of playing in and around the Mel.

A Melbourn resident said that she didn’t know the names of Cambridge streets but intimately knew the sights, sounds and smells of the River Mel and loved to show its delights to city living visitors.

They used to take small pieces of chalk from the river bed to use for drawing hopscotch squares. Combined with the charcoal from their father’s bonfire they had the basic natural drawing materials.

Many of the other participants also remembered happy hours playing in and around the Mel. Elizabeth Williams provided a photograph of her daughter in the river and a lot of others remembered swimming in it, especially enjoyable when there was a very hot summer, like 1976.

The area around Guilden Bridge was also a common spot for swimming and one person learnt to swim there.

I was told that Jenny Brightwell, who now lives at Shepreth Mill, used to swim in the moat at Flambards in the 1960s.

Mr Hopkinson from the Bury described an occasion when there was a wedding reception at the Bury. It was so hot that all the bridesmaids stripped off and took a dip in the lake!

Generally the Mel was a safe place to play but Ken Winter remembers saving Johnnie Salmon when he was about 5/6 years of age in the Mel at the rear of Woolpack Farm. This was in 1945. Ken was friends with Johnny’s brothers Peter and Colin and they often played at this spot (owned by Herbert Ellis) as the the brothers lived in a thatched cottage at Woolpack. However, on this occasion Johnnie fell in and was just about to be carried into the pipe through which the Mel runs at this point towards Topcliffe Mill when Ken, who was aged 10, grabbed him. He pulled him back and got him out of the water. At this time the Mel ran much faster and was higher.

Barbara Harding described a large tree on the recreation ground in Melbourn which was a favourite spot for children to climb on and jump either into the water or onto the other bank. However, she said “I never did it; it was only the boys”. Others remember playing around “the pile bridge” (this is the term used on a 1953 map and was also used by a Melbourn resident), which was at the railway line, before electrification.

One informant told us about cross country runs from Melbourn Village College in the 1960s, crossing where the access point on the recreation ground is now. He remembered the water being up to his waist and very cold.

Dam and bridge building were common activities. Bricks were often used (a lot were discarded in the river when Flambards Close was built). The brick dams were big enough to walk across the river on. Log bridges were deliberately shaken to tip the person into the water, which caused a great splash and soaked the watching children. In fact the accounts indicated that there was a lot of falling in! Linda Clarke remembers crossing the Mel behind Dolphin Lane and falling off. She got soaked!

These activities still take place, especially during the summer holidays and one of the autumn jobs for the River Mel Restoration Group is to remove these constructions, often creatively designed, to restore a strong flow.

Some residents remembered skating (or sliding) on ice covered ponds near the Mel. Raymond Course used to skate on Cam pit. Linda Clarke remembers trying to skate on the Bury Lane lake but the ice was too thin and she fell in, spoiling her new suede shoes. Her mother was not pleased! One couldn’t skate on the river because the water temperature was always above freezing.  People also used to skate on the horse pond at Sheene Farm.

In recent years, a number of events have been held near the river. In 2003, a Melwood event, organised by Meldreth Village Association and Meldreth Parish Council, involved a home made boat race with boats launched from one of the bridges.

People remembered fishing off the bridges across the river and in local ponds. Some even remembered catching eels; Topcliffe Mill was specifically mentioned, where the best time to fish for eels was apparently after a storm. However, the most common catches were “millers thumbs” or bullheads, sticklebacks, minnows and fresh water shrimps. “Red breast” was also mentioned – this may refer to sticklebacks. Someone also mentioned roach, although these are no longer in the river. They used jam jars, nets and bent pins on string from sticks. Nets could be bought from the Post Office in Melbourn.  Barbara Harding said “I used to ask my mum for a penny to go and buy a net to enjoy myself at the river”.   Another Melbourn resident told us she used her mother’s stockings for fishing.

Apparently at Bury Farm they once sealed off their stretch of river with chicken wire and stocked it with rainbow trout. However, the Royston paper then published a small ad saying ‘fishing for free in Melbourn’ and the trout were soon gone! Brigadier Brooks also introduced trout to the lake at the Bury when he was a tenant. Mr Hopkinson, a previous owner of the Bury, recounted an incident when a Columbian servant caught a pike from the Bury lake with a rake and then hit it on the head to kill it.  He couldn’t remember how it tasted, but it was the only pike in the lake while he was there. He also said that possibly there had been a mink farm at the Bury.

Trout were also introduced at Sheene Mill before it became a restaurant. You could see them from the bridge and boys would catch and sell them locally. The owners of Meldreth Court sealed off one of their ditches at one time and stocked it with trout.

Meldreth Court had a boating lake and boats were also used on the Bury lake. The pictures show ladies reclining under elegant parasols, reminding us of a more leisured past.

We were told that there was a story in the village that when the Mortlocks owned the Court at the beginning of the 20th century on Sundays they would have guests who would get into little boats and potter up and down a ditch dug parallel to the Mel. Village people were invited to come and watch “the gentry” enjoying themselves. This account amused those listening.

A former employee at the Bury told us how a former owner, Mr Hopkinson would make papie maché boats which he floated on the lake for his children and their friends. Mr Hopkinson himself did not remember this. However, he did describe taking a boat which he paddled and portaged from Sheene Mill to Harston via the Mel and the Rhee. He also made a paper boat, which was large enough for one person, and tried to sail it at Waterbeach, but there wasn’t enough wind. He also described using a “ropey” rowing boat on the Bury lake. On one occasion his brother took the governess to the small island on the lake and then rowed away leaving her marooned on the island. No more lessons that day!

The Roberts used to canoe and swim in the river near to the junction with the Rhee. On one occasion they managed to get from there to “the camp”. Christina Renwick remembers a friend Kirsty canoeing in the Mel by the recreation ground in Melbourn.

Many local residents remember floating down the river in improvised “boats”. Molly Chamberlain remembered trying to travel in a galvanised bath, but unfortunately it had too many holes! Someone else described how they had travelled from Sheene Mill to Topcliffe Mill on two World War 2 aeroplane oil drums tied together. These may have been the drop tanks, described by someone else, which were recovered  from an aircraft which crashed in Meldreth in the 1950s. Chris Duguid told of her adventures “paddling on tractor tyres from the bottom of Woolpack Way, and you could get quite a long way up towards The Court. The river always seemed to be wider and deeper when I was a child”. In fact, pictures of the Mel in the 20th century do show it much wider near the Melbourn playing fields.  There were other stories of using logs and cleverly improvised rafts to have fun on (and probably in) the river.

In the late 1950’s otter hounds were housed on the river at Longmead, 90 High Street when it was owned by the Jackson family of Fowlmere.

This presumably means that otters were a threat in some way, although there is no evidence of commercial fishing locally. It is possible that they were just used for sport.  They may have been part of the Eastern Counties registered pack.  Ken Winter remembers following an otter along the Mel.

Otter hunting is first mentioned in England in 1360. However in 1977 there were only nine registered packs. In 1978 the otter was placed on the list of endangered species so that otter hunting ceased, apart from some use of the hounds for hunting mink and coypu. In 1992 a survey in Cambridgeshire showed that the otter was almost extinct in the county.

The otter is a very clever and reasonably large animal so the otter hound needed to be a strong and courageous breed.

A full immersion baptism took place in the river in Melbourn in the early part of the 21st century.

Although not linked to the River Mel, the pond at College Farm is fed by local springs. On 7th February 2020 it was drained and cleaned after there had been an oil seepage into the pond.  Unfortunately the fish did not survive but the springs were seen beginning to refill it. 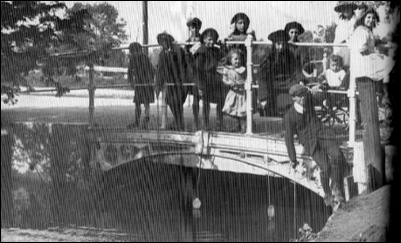 Fishing on Sheene Mill bridge
A Glimpse into Melbourn's past 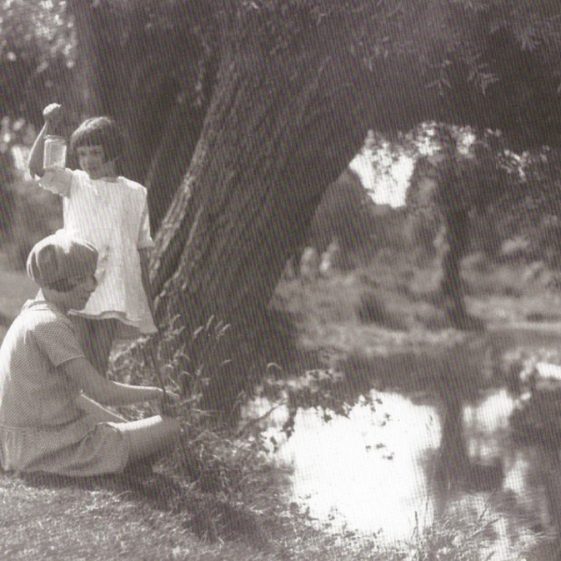 Have I caught anything? The girl with the jam jar is Linda Hill's mother. The location is Melbourn.
Melbourn Local History Group 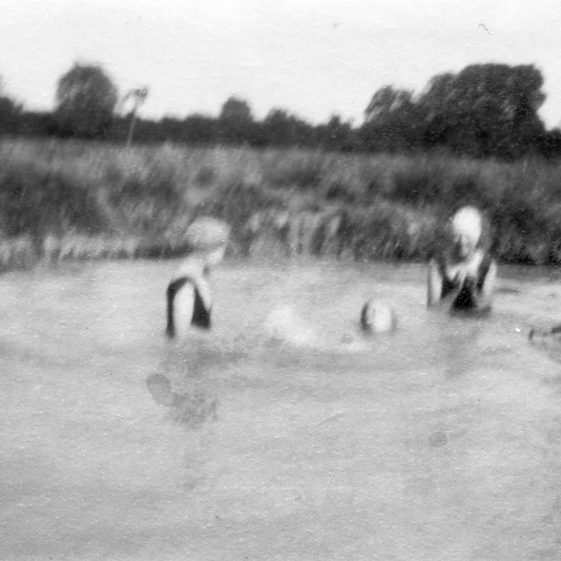 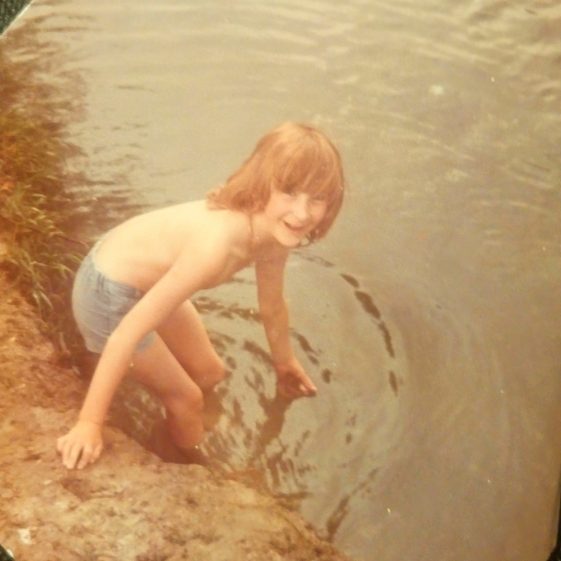 Paddling in the 1950s
Elizabeth Williams 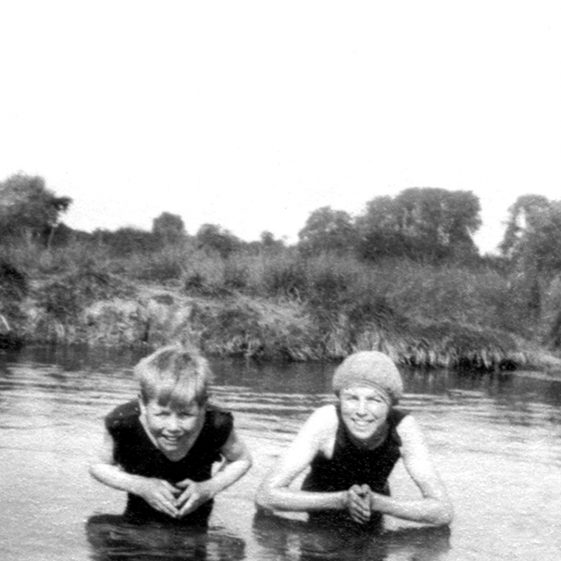 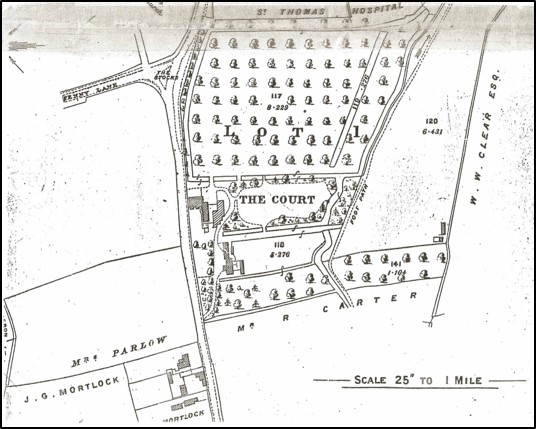 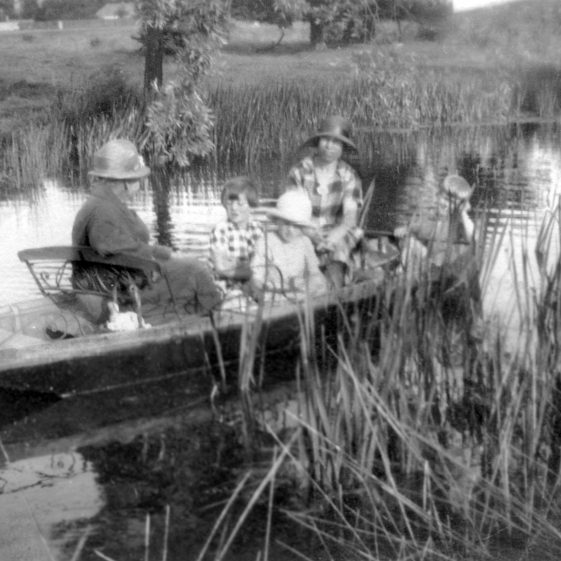 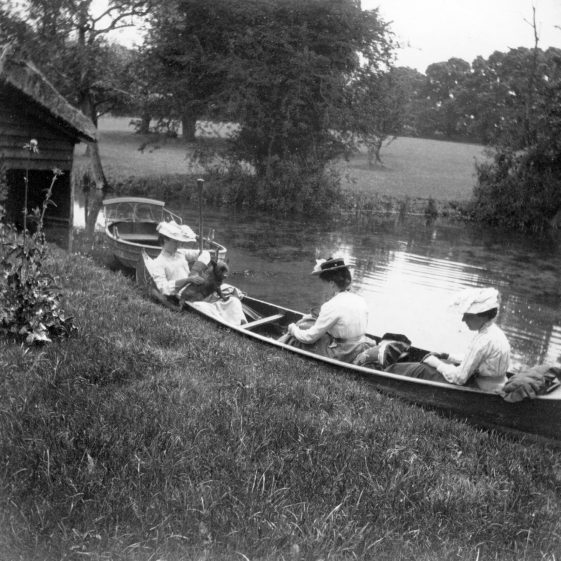 Relaxing in a punt at The Bury
Melbourn Local History Group 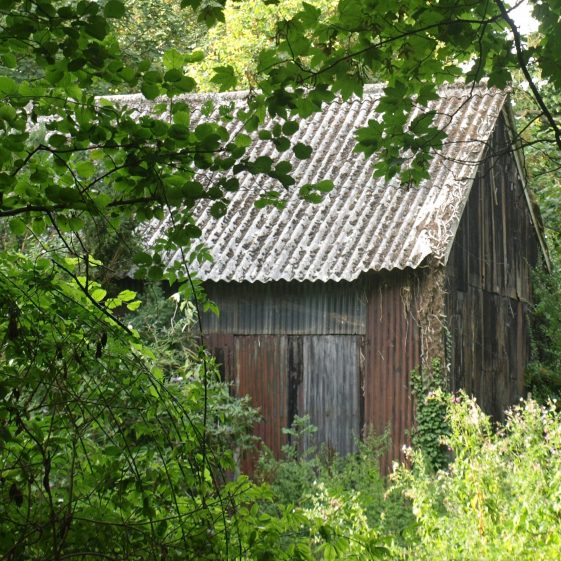 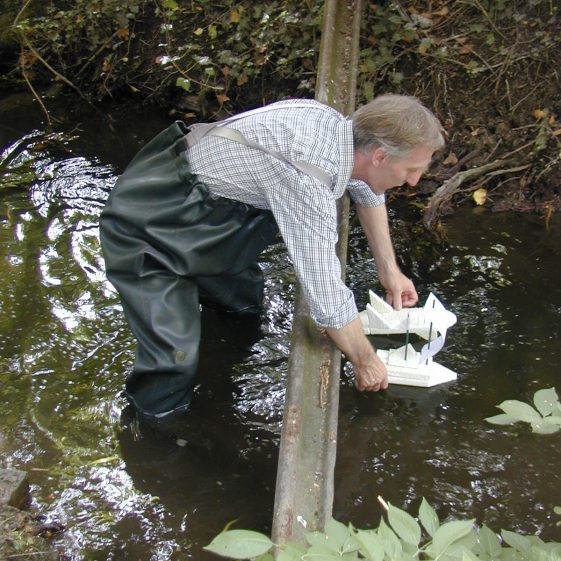 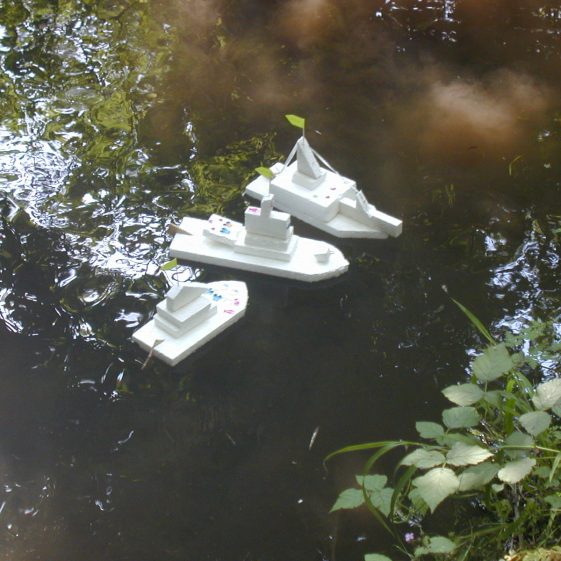 Who will win?
Tim Gane 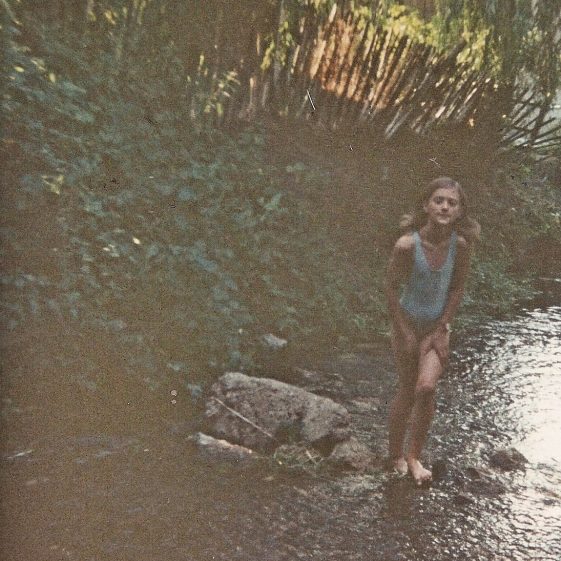 Paddling in the 1950s
Meldreth resident 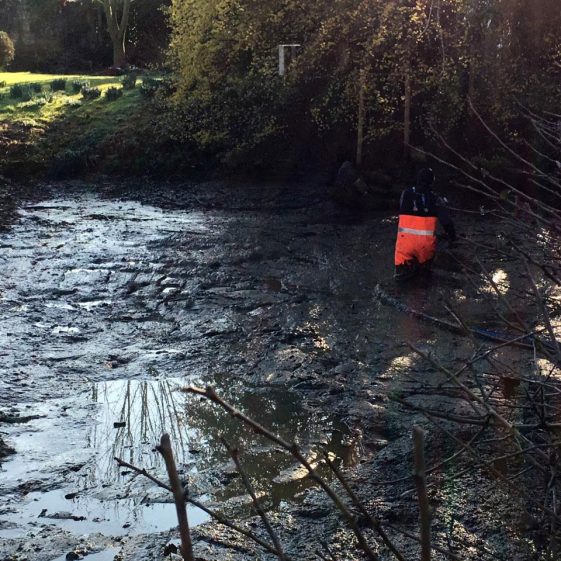