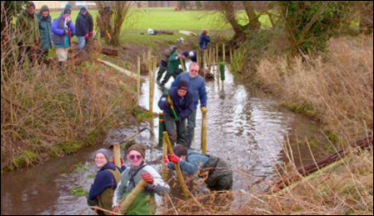 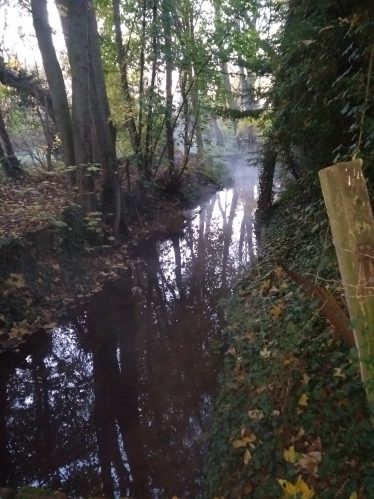 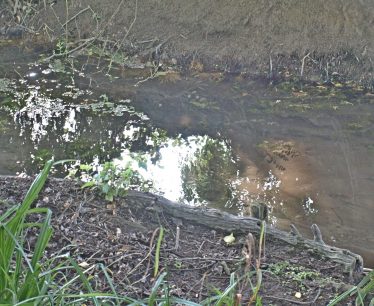 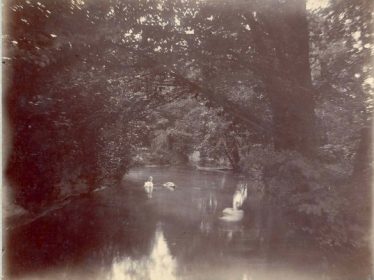 Chalk streams provide a particularly rich environment for wildlife due to their specific, mineral rich and stable temperature characteristics. They are especially valued by trout fishermen and “The Life of a Chalk Stream” by Simon Cooper describes in beautiful detail the way the river and its wildlife changes during the year. It stresses the importance of managing the flow to maximise biodiversity.

We are very fortunate to have the River Mel Restoration Group who over the last ten years have worked diligently to restore the river to its former glory after years of neglect following the closure of the mills and ineffective dredging. By introducing faggot bundles, creating riffles and constricted flows, moving silt to the edges and then planting these edges with irises and sedges etc. a more constricted and winding flow has been created.  This has only been possible with the co-operation of all the riparian owners along the river.

The health of the river is indicated by patches of water crowfoot (with beautiful small white flowers in summer) which only survives in fast flowing, clean watercourses.

Gravel has also been introduced to encourage more water invertebrates and help to provide spawning areas for trout. Even large boulders were introduced under the A10 bridge to help vary the river textures. Regular invertebrate counts (“kick samples”) have indicated a richly bio diverse river. The Environment Agency has been very supportive and also perform regular checks on the quality of the water.

In the summer of 2017 I counted 37 trout on a walk beside the river. This population has been subsequently diminished by an otter, heron or the local egret; but should recover. Other fish which can be seen are bullheads (also known as miller’s thumb), sticklebacks and minnows.

The river banks are home to the endangered water vole, who can be heard “plopping” into the stream if you are lucky. Water rats can also be spotted. One source remembers seeing one at Flambards Mill when he visited with Melbourn School.

The grandmother of the family living in the house by the Mel opposite Sheene Mill had a shock one day when a newt emerged from her Raeburn stove in the kitchen. Lizards and grass snakes live near the Mel at Stockbridge Meadows.

You may just spot one of the kingfishers, that nest at Sheene Mill and near Topcliffe Mill, flash past. Grey wagtails can be found under Topcliffe Mill  and buzzards and owls can be seen and heard in and around Melwood.

A pair of swans (unfortunately they didn’t breed) was introduced onto the lake at the Bury in the mid twentieth century. They were brought by car from a sanctuary at Windsor, that had too many. Their bills needed to be kept moist with damp tissues. Other drivers would pass and then slow down to get a better look of the strange passengers!

Swans could be seen in the stretches behind Dolphin Lane and there is still one at Sheene Mill lake, which might be interested in your meal if you are eating on the patio! They were introduced to Sheene Mill from Poland. When one was damaged by a fox and had to be taken for treatment by the RSPCA, the RSPCA initially said that Sheene Mill could not have swans as they are all owned by the Queen, but when it was explained that they had been brought from Poland, it was allowed.

There were also swans on the boating lake at the back of the Court in Meldreth.

A Melbourn resident told us that when she was coming home from Melbourn Primary School she saw swans swimming on a flooded Station Road and guarding their seven cygnets. There was no way she could get to her gate and was truly scared of their hissing and wing flapping.  Another Melbourn resident reported that in June 1969 a family of swans nested at the bottom of her garden on Dolphin Lane and raised seven cygnets, quite possibly the ones that stopped the other person from getting into her house!

There is an account elsewhere on the site of someone being fined for killing a swan near Sheene Mill in 1878.

Swans could be a hazard on the road if you were riding your bike, as an employee going to work at Atlas in the morning remembered. She described the mother swan ferociously protecting her young so she had to get off the bike and walk past. Ducks and moorhens are regular visitors with their broods. There is even a duck crossing sign on Station Road near Sheene Mill. Woodpeckers nest at the Bury and near Melbourn Village College. Unfortunately for the trout, egrets and heron are also common when there are fish in the river.

Bird walks along the river bank have produced counts of up to 40 species.

At appropriate times of the year you can spot the insect swarms beloved of fishermen and, early in the morning during the winter, the steamy mist formed because the water is at a constant 10 degrees.

The river also supports a rich plant life. As mentioned, water crowfoot is now well established along the base of the river. This was due to an initiative by Meldreth resident, Margaret Lynch. The water irises are very pretty when in flower. Rushes and sedges grow along the banks and have to be kept under control or they will impede the flow. However, they are also important for stabilising the banks. Water parsnip lives on the base of the river and also needs to be regularly cleared to maintain good flow. Melbourn residents remember picking mauve milkmaids, cowslips and buttercups along the rivers edge when children. People would harvest watercress from the river for private use.