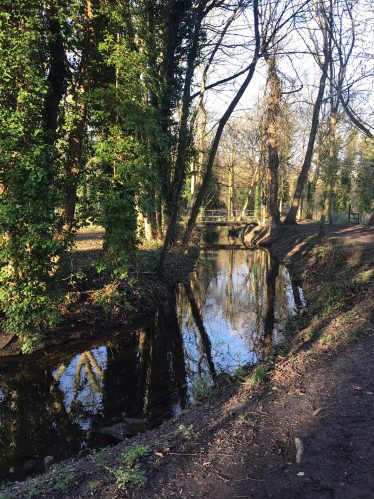 Historically the river may not have been a very healthy place. Ideas about disposal of waste were not very sophisticated until the late nineteenth century and sewage and other pollutants may have leached into the river.  There was certainly a problem on the Cambridge backs from the 17th until a sewage system was introduced and there was the “Great Stink” in London in the 19th century which stimulated the development of  a proper sewage system there.

However, the Mel appears to have been able to sustain a rich wildlife and we have not yet found any reference in the Topcliffe manorial records to pollution of the watercourse. It is possible that the flow was fast enough to keep the river reasonably clean.

There are now five major threats to the quality of the water.

Extraction rates have increased with the housing development happening in all the local villages. This affects the aquifer and can result in a serious fall in the river level if there is a prolonged period without rain followed by a hot summer. The whole stretch from the source to Sheene Mill dried up in 2012.

The local sewage works discharges into the river. Discharge should only happen at certain times of the day and be of a monitored quality. However, there have been instances when the specified levels of contamination have been exceeded and problems can occur when there are very heavy rain showers.

In periods of very high rainfall contaminated water flows directly into the Mel, for instance off the A10, with a higher concentration of pollutants than normally.

Harmful chemical run off from adjacent farming land should now be strictly controlled. However, the situation is constantly monitored by sampling by the Environmental Agency.

The River Mel Restoration Group regularly clean up the river and its banks and it is distressing to see the amount of these items that are still deposited in the river, despite regular appeals for restraint in Meldreth Matters and Melbourn Magazine.

When humans were completely dependent on the land and the rivers for their food, clothing and shelter they respected it and worshiped the spirits of the place. Later, with the development of agriculture and science, they began to study it and became more alienated from it. Now, some argue, we only exploit it and will eventually lose it. As Benjamin Franklin said “When the well is dry we know the meaning of water.”

We need to keep the younger generation aware of their ongoing responsibility for their countryside.

We hope you will find the time to explore the wonders of the River Mel. There is much to experience if you keep your eyes, ears, and even your nose, open.