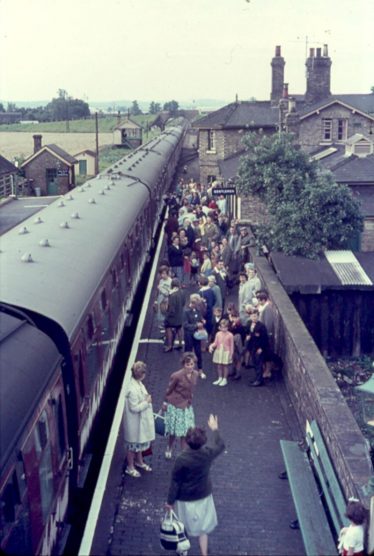 zoom
Meldreth Station ~1960. Note the Gentleman's toilet in the centre of the photo and then scroll down to read an amusing article about it.
Ann Handscombe 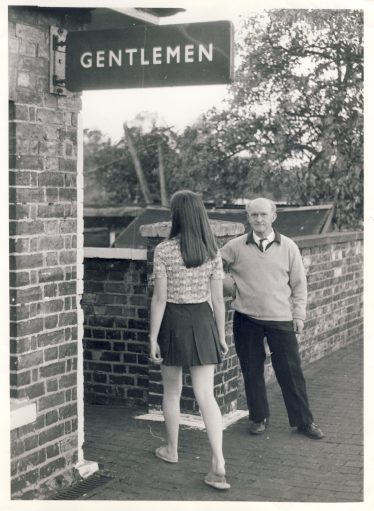 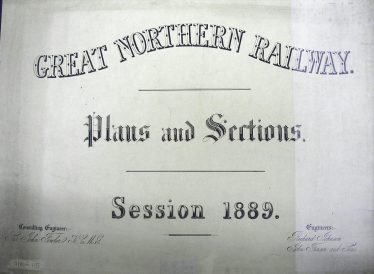 zoom
The enquiry following the death of Edith Brushett recommended the installation of a footbridge at Meldreth station to prevent passengers walking across the railway line.
Cambridge Record Office 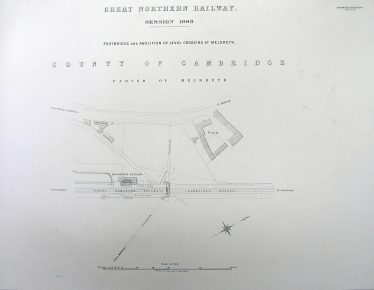 zoom
Plan showing the position of the footbridge, the forerunner of the current pedestrian bridge.
Cambridge Record Office

On Sunday evening last, the 6th inst., a young man named John Racher, of Meldreth, labourer, was at the railway station, when he volunteered to go and put the light in the down auxiliary which is 800 yards from the station.  The porter allowed him to go.  A few minutes after he was gone the 5.15 pm train from Cambridge to Hitchin arrived at the station and went on again.  At that time there was a strong gale of wind blowing down the line, which prevented the sound of the train from being heard.  Racher had got between 600 and 700 yards from the station, when he was overtaken by the train.  He states that he had previously seen the train at the station; that he was walking up the six feet (he must have been close to the metals of the up line) and was in the act of turning round to see if the train was coming when the buffer of the train struck him on the left side of the back.  The force of the blow lifted him off his feet and sent him flying in an oblique direction across the down line.  When he came to the ground he found himself close to the hedge on the side of the line.  The distance he was thrown was at least ten or twelve yards.  The driver saw him fly from the engine and the train was brought to a stand as quickly as possible.  The men ran back, no doubt expecting to find a corpse, but when they got to the spot they found Racher on his feet and apparently not much hurt.  He was able to walk home and we understand the only ill effect he felt was a stiffness in the side where he received the blow. – Cambridge Chronicle

An inquest was held at Meldreth, near Royston, on Saturday, by Mr C W PALMER, Coroner for Cambridgeshire, on the body of Edith Mary BRUSHETT, the young lady who was killed on the previous day by a Cambridge Express.  She was the daughter of Mr James R BRUSHETT, a cheesemonger, of 59, New Cut, Lambeth, and, with her younger sister, had gone from London to Melbourn on a visit.  She was going to meet a friend from London at the Meldreth Station, and crossed the line without seeing the express approaching, and, being a little deaf, she apparently did not hear the driver’s whistle nor a call from those who sought to warn her of the danger.  After being struck by the engine, she was carried a distance of 70 yards and was fearfully cut about.  The Jury returned a verdict of accidental death, but, as the point at which she crossed the line was a level crossing which was much used by the public, they added a rider recommending the Great Northern Railway Company to adopt a plan of temporarily locking the gates from the signal box when an express is approaching.

The level crossing in the above article refers to walkway across the railway tracks in the position of the current footbridge and not a level crossing as we know them today.  It is difficult to believe that it was common practice to just walk across the railway tracks in the same way we cross a road today.  Following the death of Edith Brushett a footbridge was installed.  However, speaking to senior residents of Meldreth they can remember that the footbridge was little used, even up until the 1960s, with travellers preferring to take the shortest route across the tracks!

A fuller account of Edith Brushett’s death can be read by scrolling to the bottom of this page and clicking on the document link.  Subsequent to the publication of this document in the Melbourn Magazine John King has discovered that Edith’s mortal remains were laid to rest on June 17th 1886 in the Brushett family grave in Nunhead Cemetery in London SE15.

Inquest into the Death of Frederick Dilley at Meldreth Goods Yard, 1896

In August 1896, an inquest was held in the Parish Room, Meldreth into the death of Frederick Dilley, aged 67, of Baldock who had been killed when a goods train ran into the hut in which several men were sitting eating their dinner on Tuesday 18th August 1896.

Several men gave evidence at the inquest and it was ruled that the accident, in which Dilley was killed and two other men injured, was the result of “an unfortunate mistake”: the signal a man gave when calling to his child had been taken as a signal to move the goods train. This is probably the incident referred to by Sara Butler (see below).

For more details of the accident, please read the newspaper reports from the time.

Women passengers at the nearby Meldreth and Melbourn Station have complained because the ladies’ room has been rented to a private firm.  The women are directed to the men’s room while a porter stands guard outside.

Rex Emery, a local councillor, said, “With its Continental-style mixed lavatory, Meldreth will go down in history for being the first British Railway station to turn European when we join the Common Market”.

You will be astonished to learn that this was big news in America in September 1970 with reports of this momentous event being carried by newspapers in Naugatuck CT, Redlands CA, Ukiah CA, Dunkirk-Fredonia NY, Logansport IN, Fresno CA, Cedar Rapids IA, Cumberland MD, Connellsville PA, Holland MI, Beckly WV, Lebanon PA, Traverse City MI, Ames IA, Levittown PA  – to name but a few!

There was an accident in the early 1900’s [probably the incident in 1896], when a goods engine jumped the rails just before it passed under the bridge, and smashed up the gangers hut which stood in the corner. Unfortunately, the men were having their “beaver” in the hut at the time.  I cannot remember about the casualties, but I do remember the man harnessing up the horse to the station wagon and galloping off to Melbourn to fetch the doctor. Of course, there were no telephones at that time. More recently, the coal office was smashed up by a truck being shunted rather too fast and knocked down the barriers outside the hut, luckily, this time, no one was inside.