The History of the Railway through Meldreth 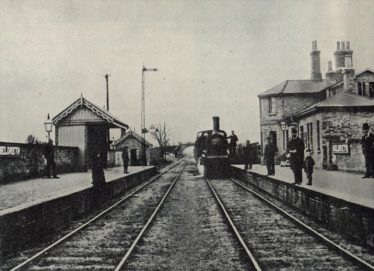 zoom
Meldreth Station ~1880 - as it would have looked when William Perkins was the Station Master
The Railway Magazine, September 1952 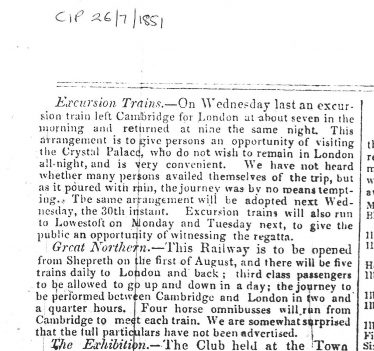 zoom
Article announcing the forthcoming opening of the Great Northern Railway line between Shepreth and Kings Cross on the 1st August 1851. Note the journey time was expected to be 2 1/4 hours. The excursion trains mentioned in the section above refers to the Liverpool Street line which had been opened 5 years previously.
Cambridge Independent Press 26/7/1851 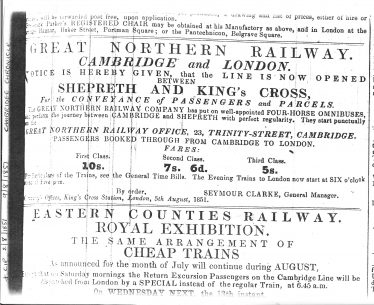 zoom
Advertisment for the opening of the railway line between Shepreth and Kings Cross. Horse drawn omnibuses were required to complete the journey into Cambridge.
Cambridge Chronicle 2/8/1851 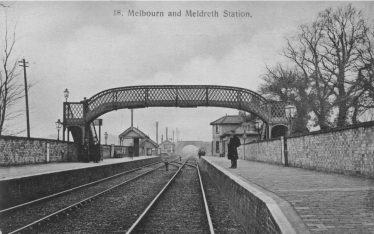 zoom
Meldreth and Melbourn Station ~1905. Note the points which allowed trains on the 'Up' (London) line to cross the tracks to enter the goods yard beside the railway.
Brian Clarke 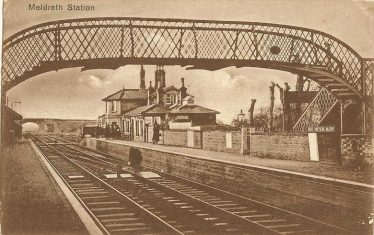 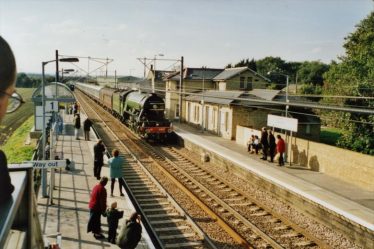 The first train came into Meldreth Station from Hitchin on August 3rd 1851.  The line, which ran as far as Shepreth to link with the Eastern Counties Railways (ECR) line into Cambridge, was an extension of the branch from Hitchin to Royston owned by the Royston and Hitchin Railway Company which opened on 21st October 1850.  The actual operation of the railway was under the control of the Great Northern Railway (GNR) whose main line ran from Potters Bar to Hitchin and opened on August 7th 1850.

ECR had completed a railway line from London Liverpool Street to Cambridge in 1845 and on April 25th 1851 a 5¼ mile single track branch line was completed between Shepreth and Shepreth Junction on the Cambridge to Liverpool Street line by way of Foxton and Harston.  This branch line was to be part of a new line between Cambridge and Bedford by way of Shelford and Biggleswade but the continuation from Shepreth was never completed.  It does however explain the sharp east / south bend in the line just north of Shepreth.

ECR were reluctant to allow GNR to run trains through to Cambridge and so initially ECR leased the track on a 14 year term from GNR and ran trains from Cambridge to Hitchin where the coaches were decoupled and attached to the GNR trains running into London.  ECR became GER (Great Eastern Railways) in 1862 and in 1864 the single line from Shepreth to Shepreth Junction was doubled to allow both ways running and so increase traffic.  Ownership of the line remained as GER east of Shepreth and GNR west to Hitchin until 1923 when GER and GNR amalgamated to form the London and North Eastern Railway (LNER).  This in turn became part of British Railways in 1948 and Network SouthEast operated the line from 1987.  Following privatisation of the railways in 1993, West Anglia Great Northern Railway Ltd (WAGN) worked the line from 1996 and then a new franchise combined WAGN and Thameslink in April 2006 under the banner of First Capital Connect, a subsidiary of First Group, the UKs largest rail operator.  FCC managed the line until 2014 when the franchise  passed to Thameslink Great Northern

Although the station started life as Meldreth Station, the name was changed to Meldreth and Melbourn Station on May 1st 1879.  It retained this name right through to March 18th 1971 when the name reverted back to Meldreth (Source: The Directory of Railway Stations” by R.V.J.Butt published 1995).

Initially there were just 6 passenger trains a week from Hitchin to Cambridge in 1852, two of them on a Sunday.  This increased to 14 by 1890 and 16 by 1910.  The number remained static until 1950 with the number of trains increasing to 27 by 1970 (8 of them on a Sunday).  The population of Meldreth in 1901 was 626 and had risen only to 893 by 1961 so it is perhaps not surprising that there had been little change in the number of passenger trains during this period   With the increase in housing in Meldreth and the village becoming a dormitory of London during the latter part of the 20thC, the number of passenger trains from Cambridge to London increased markedly and is currently (Q1 2011) 169 per week although only 66 of them stop at Meldreth.