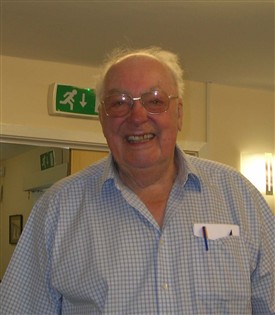 Click on the ‘play’ button on the adjacent sound bar to hear Dennis recall this amusing story.

We used to load the sugar beet up there just beyond the goods shed; there was a ramp you could go up, where they park the cars now at Meldreth station.  The trucks were along the side and you used to fork the sugar beet into the trucks.

My father came up there one winter’s afternoon, about three or four o’clock I think it was with the last load of the day and went to put it in the truck ready to go to the sugar factory and just as he’d sort of undone the tail board of the cart and got ready to use the special fork for the job and throw the beet in, a goods train came through and blew off steam just at the wrong moment just as it was going past the horse and cart and of course he took fright and went galloping down the road and he never stopped until he got to the school.

The local baker was delivering bread, still delivering bread at that time of the day, with his pony and trap.  He heard this cart coming up the road and the horse was about puffed out by then in any case pulling the cart and running, so he stopped it just as the last two or three sugar beet rolled out the back of the cart.  I don’t know what time it was but it was pitch dark before my father got home.  He had to go back because he couldn’t afford to lose all those beet in any case.  He had to work his way all the way back to station picking them up and throwing them on the cart and when he got there he had to throw them all out into the truck again.  The horses were a little bit of a trial at times!