Ann Handscombe remembers back to her trips on the 108 bus (3min 20sec)
A transcription of this audio clip can be found at the bottom of this page. 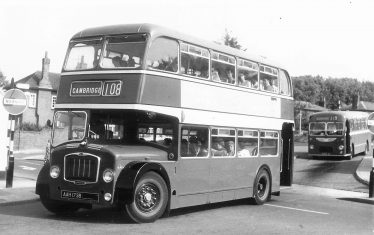 zoom
This photo is of 1964 Bristol Lodekka, when nearly new, leaving Royston Bus Station. The vehicle is AAH 173B, fleet number LFS 73. When the bus was withdrawn from ECOC service and became a playbus in Bury St Edmunds.
Thanks to Patrick Burnside for the information 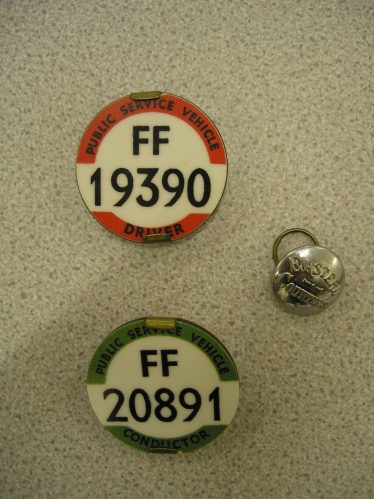 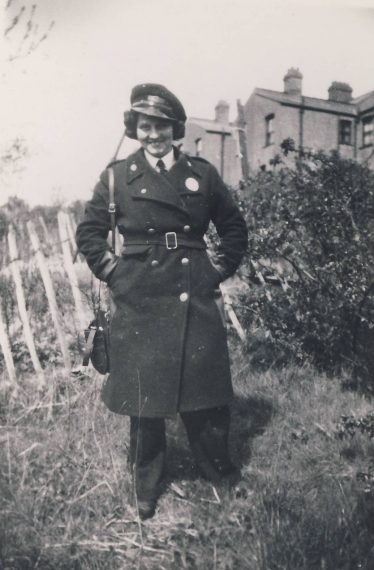 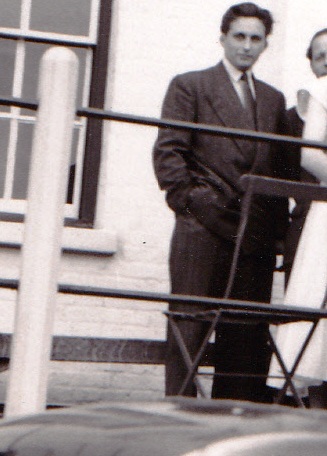 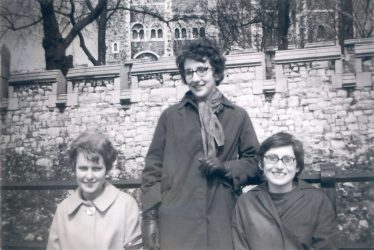 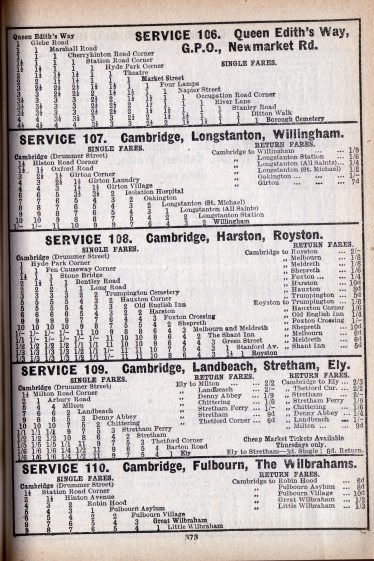 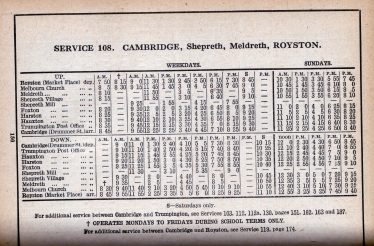 The bus route probably originated in the early 1900’s and would have been operated by the Ortona Motor Services of Cambridge as service number 8.

In 1931 the Eastern Counties Omnibus bus company took over the route and the 108  bus travelled between Royston and Cambridge.

Do you have memories of travelling on the bus either for school or work?

Many passengers on the bus between Royston & Cambridge were entertained by a gossiping dame who spoke very strongly to her fellow passengers about rising prices in general and a possible scarcity of salt coupled with a rise in the price of domestic salt. The identity of the loquacious commentator was not known to her audience. Pepper, she said  in the course of her remarks, was very scarce and costly and it was rumoured that salt might follow and fearing this she had purchased in Royston four lots of salt to place in her store cupboard in case the rumour of a shortage and increase in price should prove to be true.

The rumour had been heard and repeated many times during the past week and its origin was possibly a paragraph in a national newspaper last weekend which told of Britain sending six thousand tons of salt to Korea in response to an  urgent request from U.N.O. The Koreans it appears use a great deal of salt in the preparation of their favourite dish and their normal supply was in the hands of the North Koreans.

Scroll down to the bottom of the page to hear a recording of Ann Handscombe talking about her memories of riding into Cambridge on the 108 bus.

The stories and memories below were gathered from people who attended a coffee morning in April 2014 organised by Meldreth Local History Group.

I travelled to Cambridge Tech College on the 108 bus and on cold mornings we’d light a fire on the top deck to keep warm!

I also remember the cigarette stubbers on the back of the seats which we would unscrew. I think I may still have one!
Ray Ellis

The pushchairs were put in a cubby hole at the bottom of the stairs on the bus. One day I was on the bus with my young daughter and at Trumpington and we heard this clatter and someone said there was a pushchair running down the road! I looked out the window and it was mine. The driver stopped the bus and the conductor ran after the pushchair and retrieved it.
Mrs Chapman

I remember the day the 108 bus “fell over” in the snow at cow slip corner. I also remember a day when we were all tipped off the bus by Tom Freeman for being rowdy. We all had to walk home.
Sally Wright

The 108 bus drivers would wait for the “Bingo” ladies in Drummer Street bus station to make sure they all got on the last bus and safely home.
Joan Fallon

I remember working at the old Post Office and around about 8 am every morning I would go outside and pretend to sweep the footpath just to watch the girls go by on the bus!
John Smith

Roy Cooper  travelled on the bus to the Cambridge Grammar School for Boys. He brought maggots on the bus to scare the girls.
Ann Rogers

I used to go to ballet classes at Melbourn Village college on a Saturday morning, catch the 108 bus from Foxton to Melbourn then get the bus home from opposite Melbourn church. One Saturday I missed the bus and decided to walk home. The only route I knew was the route the bus took through Barrington. So that was the way I walked!
Mandy Handscombe

In the 1930’s Jo and Jack Varney, father and son were the driver and the conductor. In those days the bus used to only go along the A10 not through the villages. On the front of the bus it said Cambridge to Royston via Shepreth mill. They all thought it was very funny and odd.

Another conductor during the war was Tom Freeman and he always war a ribbon on his uniform. I  thought that it was to let people know he had been in the army before being discharged.

During the war Dudley Welch’s wife from Welch’s garage use to got to Cambridge reguarly and the bus conductors would always make her walk from the stop at the station, never drop her at the garage if they were passing. Dudley rang the bus company to ask if they could drop her off, they said no the buses cannot stop there.

During the war everyone needed a torch, particularly number 8 torch batteries, No one could get any except Dudley. One day a bus pulled up outside the garage and the driver rushed in asking for some number 8 batteries. Dudley didn’t respond and the driver explained he was in a hurry as he had a bus load of people waiting outside. Dudley said no that can’t be right, no buses are allowed to stop outside here!
Don Challis

I remember the parcels and even car tyres that were delivered via the bus. My father ran the garage in Meldreth High Street and often had tyres delivered this way. Same day delivery. A very efficient service.

I travelled on the bus to the Grammar School for Girls in Cambridge. I took the ingredients for the cookery lesson in a biscuit tin. One day after a cookery lesson I had a large lump of lard left over. There was a boy from the boys school who I found very irritating and so I smeared the lard in his hair and on his blazer. I was nearly expelled from school because of this incident!
Chris Duguid

If you went to the pictures in Cambridge you had  to miss the end of the film to catch the last bus home. You could not wait until the end because you couldn’t leave during the playing of the National Anthem.

When the last bus went through Shepreth level crossing the crossing keeper David Smith would close the gates for the night.
Ann Handscombe

Doreen and I were great friends and we used to travel on the Eastern Counties 108 bus – the famous one!  It used to be very noisy.  Pam Spiller used to be another one from the Sailor’s Return and Doreen from Kneesworth Road, as it was then, West Way as it is now. Myself, Jack Farnham and there used to be a Mr Trewan from Melbourn – we used to call him “Boots” ‘cos he worked in Boots.  There was quite a gang of us and we used to sit upstairs.  One of the conductors Les Lake, who Doreen was engaged to, she married him.  Dennis Watson was another bus conductor, Tom Freeman, Ida Rosendale and there was Bob but I can’t remember his surname.  They were all the regulars and we hated it when Tom Freeman was on because he was such a miserable so and so, but anyway, (Anne was asked if it used to come through Meldreth every other hour).  Yes, it used to come through here at 8 o’clock in the morning and then it used to get to Cambridge well before nine but it doesn’t now.  I picked it up outside what was Leveringtons and we came home on the quarter past five, something like that. I had a weekly ticket which cost 7/6d (37.5p) and they used to punch it in the morning and night.  Of course, if you didn’t come home in the evening you could still come home free as long as you only travelled twice a day, and I think a return ticket during the day was 1/9d (8p) something like that. The bus used to be absolutely full.

Of course, if Gordon and I went to the pictures by bus, the pictures used to finish about twenty past ten or twenty five and of course everyone stood up and sang the National Anthem then after the end of the film and it was a case of could you sing the National Anthem and then get your coat on, your shoes or whatever (Course  I always took my shoes off, they were usually three rows down by the time I got them) and we used to run for the bus, the half past ten bus and then we used to come over Meldreth level crossing and I think it was Mr Kidd, he only had one arm, he lost an arm in the War and he lived in the Station House there and he used to come out and lock the gates so if you came down that road at night well everybody just knew the gates would be locked and you’d have to turn round and go to Shepreth and along the main road and back into Melbourn.   (Ann is asked which year and replies “1952/1953”).  If somebody knew him and they were going to be a bit late they’d say to him “Don’t lock the gates tonight mate because I’ll be coming through, you know, half past eleven.  If he knew them well enough he’d say “OK mate” and he wouldn’t go to bed quite so early. He’d stay up and leave the gates until his friend had gone through.