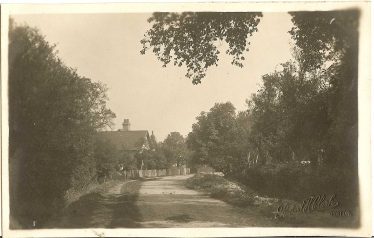 zoom
Chiswick End in the 1940s. Chiswick Farm is in the background. The scene is little changed from the photo above.
Robert H Clark postcard supplied by Ann Handscombe

I would like to report on a short stay I had in Meldreth in 1944.  I am not sure if all my memories are correct, so I welcome any comments, corrections or answers to my queries.

When I was four and a half my family were living in Sidcup, Kent but the intensity of the V1 attacks got so great my mother arranged for us to stay with her aunt in Meldreth.  The aunt’s name was Annie Waldock, whose husband was William Waldock.  They had two children Mary and Edward; the latter may have been in the services at that time.

We arrived in Meldreth by train, which due to the short platform, had to make two stops: one for the front carriages and one for the back carriages.

We stayed in Chiswick End in a small thatched cottage on the left going up the lane.  It looked very picturesque but conditions inside were very spartan.  There was no running water, so we had to cross the lane to a farm opposite to use their hand pump and well and fill buckets.  The toilet was a small wooden chemical(?) one halfway down the garden path.  There was a small stream at the bottom of the garden (many hours spent in that) that had to be crossed by stout planks, probably railway sleepers, to get to the lane.  The thatch of the cottage was alive with mice, whose presence could be heard at night and sometimes seen.

There seemed to be a group of local children of differing ages, which my older sister and I joined.  We would often go to the end of Chiswick End to a small wood.  I remember there were disused rails crossing the road.  I also believe the American Air Force stored bombs near there.

I remember the stocks on the green, the school where my sister went and said there was only one class and a lovely plum orchard, where we relieved the trees of a few of their fruits.

The USAAF and a walk to Bassingbourn is a story in itself.

I believe Edward Waldock returned from the forces and lived in Meldreth the rest of his life.  I contacted him a few years ago and was to have visited him but sadly he died before I could do so.

I guess we must have stayed a few months in Meldreth but I must have been happy there to have remembered the village.