Flambards Mill/Sheldrick's Farm in the 1940s

Keith Jacklin also remembers Mr Sheldrick's cows and relates a harrowing tale when he was looking after them one day. (1min 10 sec)
A transcription of this audio clip and a photo of Keith can found at the bottom of this page. 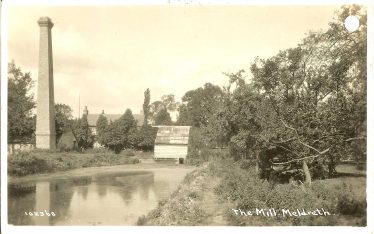 zoom
Flambards Mill after the fire, showing the wheel housing where Ken fished for sticklebacks and the chimney where he lit a fire
Bell's Postcard supplied by Ann Handscombe 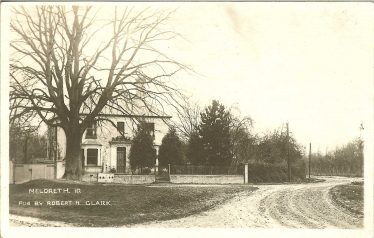 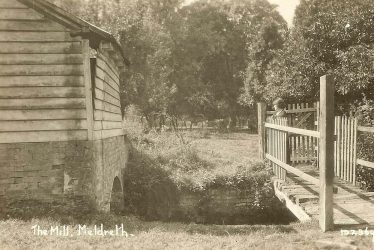 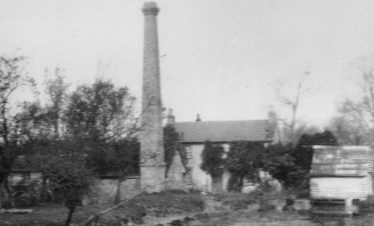 zoom
Flambards Mill after the fire, with Mr Sheldrick's farmhouse in the background
Photograph courtesy of Sandra Webb

In the 1940’s, as 7 to 8 year olds, myself together with the Salmon brothers, Peter, Colin and Johnnie, would do odd jobs for Mr Sheldrick at Flambard’s farm. Mr Sheldrick was very friendly to us and gave us quite responsible jobs, for which we were given a few pennies or the odd sixpenny bit. Mrs Sheldrick was very different and treated us for what we were – scruffy urchins. She was an elegant lady and I wondered, even at my young age, what she was doing living in that cold dark house, surrounded by mud, cow muck, goose droppings, broken down sheds and a burnt out mill.

On the farm were four cows, one young bull, about 20 geese and some chickens. Mr Sheldrick also farmed, or helped farm, the field which is now the recreation ground. Our usual job was looking after the cows. We would help milk them (by hand), take them down to the school meadow or the woolpack for grazing, fetch them home and tie them up at night in the cowshed. The cowshed did not have a door. The cows were all different in size, colour and character. The brown and white cow would attempted to kick anyone walking beside her (cows only kick sideways). The red large horned cow would attempt to dig her horn into whoever was tying her up at night. Mr Sheldrick taught us to get up close to its shoulder so that she could not reach us with her horns. There was a jersey cow and a young bull which we were a little wary of. We spent a lot of time there when we all had whooping cough and had to take four weeks off school. We loved to herd the cows past the school when the girls were coming out.

We did have trouble on one occasion getting them back from the school meadow. They had crossed the river to the area now known as Melwood and didn’t want to return across the bridge. After much chasing by us, the young bull panicked and made his way back via the footpath, smashing the two stiles on the way. Meanwhile the cows were all running around the field looking for an escape route. We did eventually get them home, one at a time, and tied them up in the cowshed. Mr Sheldrick was not too happy with the broken stiles; I don’t think he paid us that day. The young bull was now getting too boisterous and had to be sold.

One job that we loved to do was to take the horse and cart, that Mr Sheldrick had been using, back to Mr Adcock’s [Geneva House] by the stocks. The horse knew the way so we did not have to do much driving. We had to be careful though going into Mr Adcock’s entrance to avoid the cart hitting the gate post. The horse was going through regardless. I do not ever remember see a car on our journey or a policeman!

The field that is now the recreation ground was used for growing corn. Mr Sheldrick would get me to drive his tractor on the field while he shovelled cow manure off the back of the trailer. I was too small to sit on the seat and so I drove the tractor standing up. This was difficult and once when I started off too quickly he fell off the back of the trailer onto the manure he had just shovelled off. I’m sure we must have laughed but I can’t remember. The field was ploughed using the tractor and the corn was sown by hand. We did help with the sowing but this was very slow and we soon got bored and made an excuse to go home.

The exciting time was later in the year when the corn was thrashed. The corn was stacked where the sports pavilion is now and a traction engine with a thresher would arrive and be set up. I would be enthralled with the workings of the steam engine, all the belts and pulleys, the noise and smell of smoke. Many people would gather around, some with dogs which would chase and catch the rats as they ran out from the stack.

Our time at the farm was not all work; we did play as well, probably most of the time. I remember lighting a fire in the old chimney to see if we could get smoke to come out of the top. My favourite place was in the old mill wheel house watching and catching the sticklebacks that always hid there. We usually ended up with a walk down the river. I loved the river, Topcliffe Mill, the mill field full of buttercups and the old shed at the end of the field where the barn owls nested.

Click the play button on the audio bar at the top of the page to hear Keith Jacklin talking about one of the times he was looking after Mr Sheldrick’s cows.

As boys approaching double figures, we were encouraged to earn money to buy new boots.  I had a regular evening job.  After tea I would call to take six or seven cows of Mr Sheldrick’s from Flambards, take them down the High Street and Fenny Lane to graze on verges in Whaddon Road and Mettle Hill.  I gained sixpence a night.  On one occasion the owner’s dog decided to come with us.  As we went down the High Street the cows would run along and brush themselves in the hedge.  The dog decided to take charge and ran between the cows and the hedge forcing them into the road just as the bus was coming.  One cow had a foot under the wheel which pulled off its hoof.  With much blood it was bandaged up with sacking and soaked in tar and with the help of a piece of rope and a short pole it was possible to hold up the foot to allow it to walk home on three legs.  Very frightening.